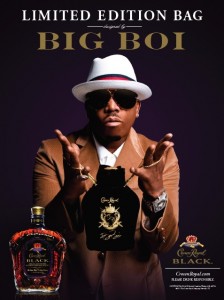 Big Boi, is an American rapper, song-writer, record producer and actor, best known for being a member of American hip hop duo OutKast alongside André 3000. We recently had a chance to chat with Big Boi, for the latest episode of the Gunaxin Show. We spoke with Big about music, sneakers, movies and his work with Crown Royal.

Big Boi has partnered with Crown Royal to develop unique content and put his own spin on the iconic Crown Royal bag. Cameras went behind the scenes to document Big Boi in compelling moments of his life and career that showcase his definition of “The Crown Life.” The short film will let audiences into Big Boi’s life as he performed at the 2011 Grammy Awards; inside his studio, Stankonia, as he prepares for his latest projects; and an evening out on the town in his hometown of Atlanta with stops at his favorite spots to unwind. Check out the video below and our full interview on The Gunaxin Show! You can check out Big Boi on his website and Twitter. For more on Crown Royal Black, check out the Crown Royal website.