Bruce Campbell is an actor, producer, writer and director. He may be best-known for his starring role as Ash in the Evil Dead trilogy of horror/slapstick movies. He is currently starring as Sam Axe in Burn Notice on the USA Network. You may also know him from The Adventures of Brisco County, Jr., Bubba Ho-tep or many other films and television appearances. Gunaxin recently had a chance to interview Bruce via conference call, read about that experience below. 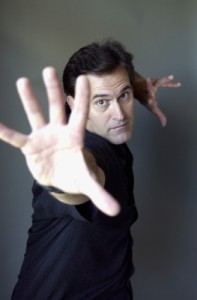 Though there wasn’t really an introduction per se, as it was a phone call completely monitored by some lady named Christie, Bruce was welcomed and replied to each and every question he was asked with just about as much thrill and interest as you’d expect from the hero of the Evil Dead Trilogy: with humor and good grace. It was a bit difficult to get all six questions rattled off as I’d have liked to, but the way it was done was fair and non-biased. Basically, everyone was given as many opportunities to ask a question as the next person (and there had to have been at least thirty folks on there from various affiliations) and as you locked yourself in by hitting *1, your turn was placed in a queue and you were introduced each time the position came around. I was lucky enough to ask three questions myself, and two more on the list you see were answered just coincidentally.

Now, though I am a huge fan of Bruce as Ash, as an author, as Brisco County, and of course as Sam on Burn Notice, I really couldn’t turn into the slobbering geek I likely would have were this interview in person. Even so, he was cordial, humorous, and quite talky. He was asked about how he felt being shoe-horned into the genre he’s given in to, and Bruce admitted it was by choice and therefore, he enjoys it. He was questioned about Sam’s comings and goings in the new season of Burn Notice (tune in Thursday on USA) and told the person that much more information and background of not only him, but Michael and Fiona as well will be explored. He is fond of Sam as being a bit more realistic character of the group he has portrayed and is very fond of Sam’s enjoyment of, “the sexy ladies”. Another inquiry was regarding the shows locale and the near uprooting of the whole thing were it not for a year lease being forged. Bruce admitted that, though he’s from Oregon, the show being in Miami makes it different inasmuch as it’s the only show being shot there. Even CSI Miami is shot in California. Another fan asked about his preference for either voice acting or live, and Bruce said 50/50 but eluded to a film based on the kid’s book ‘Cloudy With A Chance Of Meatballs’ arriving in the fall with him as a lead. My kids love that book!

Enter to Win a Prize Pack including Season 1 and 2 of Burn Notice on DVD!