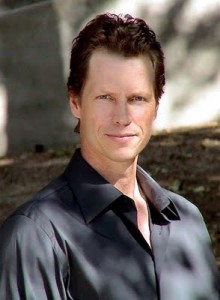 Frank Beddor learned to water ski from his father at a young age and being the kind of person he is, became a world champion free style skier. After he retired from skiing at the age of 23, because you know, he had done it, Frank turned to movies, first as a stuntman and then as a producer. For him this meant producing “There’s Something About Mary” which grossed $360 million dollars.

Still, he felt that something was missing creatively being a producer and turned to writing. His first book “The Looking Glass Wars“, a re-imagining of the ‘Alice in Wonderland’ stories was initially rejected by every major publisher in the U.S. But if you have been following along you probably already guessed that once he found a publisher his book became a smash hit and is now a trilogy. The books also spawned the Hatter M series of graphic novels. Want to check out the books? Great, because we have a contest where you can win your own copies!

He is currently developing the film adaption of the board game ‘Monopoly’ to be directed by Ridley Scott, but today he answers Gunaxin’s Six Questions: