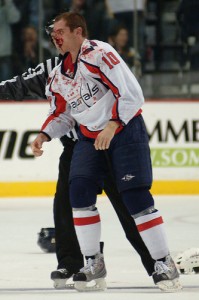 Winger Matt Bradley doesn’t shy away from throwing his fists when the circumstances call for it. In a game against the Rangers in November, Bradley scored the winning goal after getting badly bloodied in a fight. Against the Flyers in December, Daniel Carcillo sucker-punched Bradley in the first period, sparking the Capitals to an 8-2 win. Way to take one for the team, Brads! Also, Matt became a father in December, for which he got player of the game honors in a game that he didn’t even play in. Needless to say, Bradley is quickly becoming a fan favorite in Washington. Recently, Gunaxin’s brother site, Capitals Outsider, filmed an extensive talk he had with beer league players in Maryland, and also found time to ask the Six Questions.

Note: This interview was shot in mid-November, before Tiger’s “transgressions” became public.