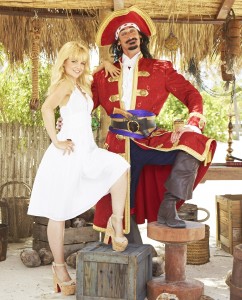 Mena Suvari is an actress best known for her breakout roles in American Beauty and American Pie back in 1999, but has been working on a variety of television and movie projects ever since. She recently finished filming for American Reunion, and was named Island Reporter by Captain Morgan.

What is an Island Reporter? Her role is to help Captain Morgan get the news to wannabe crews across the country and encourage them to sign-up to the challenges that could lead them to his island and a $15,000 prize.

The Captain’s Island is a competition where participants take part in a number of different challenges to earn ‘keys’. Once a ‘key’ is found/earned contestants are required to log them on The Captain’s Island Facebook application. Mena Suvari added: “But you’re going to have to impress Captain Morgan to stand a chance here. If you can’t show leadership, camaraderie, determination, bravado and clever thinking then you can kiss goodbye to an Island adventure and a share of his bounty. He doesn’t just give this away – you have to earn it.”

You can see more of the fabulous Miss Suvari in our full gallery, and check out her answer to the Gunaxin Six Questions below.