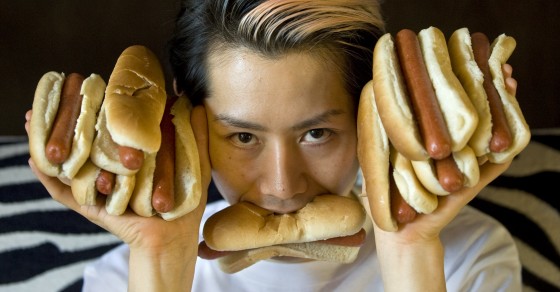 You may originally know Takeru Kobayashi from his dominating six straight championships at the Nathan’s Annual Hot Dog Eating Contest. Due to some contractual disputes, Kobayashi has not competed in that event since 2009, and it’s now been taken over by Joey Chestnut. But that doesn’t mean that Kobi has stopped eating, far from it.

Recently, the world’s greatest eater, Takeru Kobayashi, announced that he will participate in Philadelphia’s legendary eating contest, Wing Bowl, for the first time ever.  The event, the 20th annual, will be held before a live audience of over 20,000 at the Wells Fargo Center on February 3rd.

“Wing Bowl has proven to be a contest like no other.  The sheer nature of eating chicken wings requires both stamina and technique,” said Kobayashi.  “Ultimately this sport, like any other, is about the fans and I want to allow mine to tune in from around the globe and be as close to the action as possible.”

During the event Team Kobi will be providing exclusive, unprecedented access to the action on his UStream channel and Facebook fan page.

In keeping with his November vow when he set the world turkey eating championship in New York City and volunteered at the Bowery Mission, Kobayashi will announce an initiative to use Wing Bowl to create awareness for hunger-related causes in the Philadelphia-area as a part of his participation. Before Kobi tears into some wings though, he spent some time answering our 6Q.