Recently we had a chance to speak with former New England Patriot, Troy Brown, and we hit on his work with Captain Morgan, the Patriots, and of course ask Troy the Gunaxin 6Q. You can hear that full interview below : 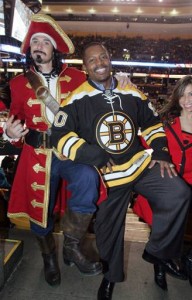 Bostonians not in attendance at the Patriots or Bruins game can still participate and have their Poses counted by visiting the CaptainMorganUSA Facebook page where they can upload photos or videos of their Captain Morgan Pose, along with the legendary stories that helped inspire them.