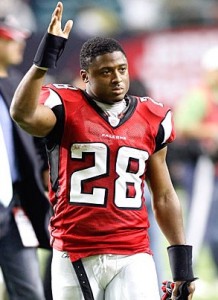 Warrick Dunn is a former NFL running back, and current minority owner of the Atlanta Falcons. He was drafted by the Tampa Bay Buccaneers 12th overall in the 1997 NFL Draft, after playing college football at Florida State. Dunn was named AP NFL Offensive Rookie of the Year in 1997 and earned three Pro Bowl selections in his career. He played for the Atlanta Falcons from 2002 to 2007 between stints in Tampa Bay. He ran for nearly 11,000 yards in his career.

Known almost as well for his work off the field as he is for his accomplishments on the gridiron, Warrick, along with country music star Rodney Atkins, will be hosting a care package stuffing event and free concert at Cowboy Stadium on Sunday afternoon, as part of the Crown Royal Heroes Project—an ongoing commitment to honor, recognize and give back to America’s finest – including police officers, fire fighters, military personnel and more.

Warrick is helping spread the word about the program in honor of his mother, a former police officer who was killed during an off-duty security shift when he was growing up.  So, as you might imagine, this chance to give back to cops and other heroes around the country is particularly powerful for him.  More info on this touching story here.