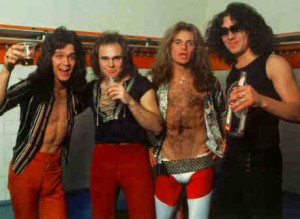 While riding the waves of popular music from decade to decade, one-time fans sometimes disassociate themselves from past waves and label them as cheesy. It’s often not until a new – but unappealing – wave comes when they re-embrace the past. While this is typically a sign the fans are just getting old, it’s now clear that few waves of music have been so shunned – and then re-embraced – as 80’s Glam Metal.

It’s not hard to see why someone would think this music is cheesy. Who can now take seriously bands that wore glittery spandex, had huge hair, or even wore women’s makeup? High-energy songs about partying, girls, and fast cars are childish compared to what came next. As those same fans ‘matured,’ they tossed out their RATT albums and embraced 90’s music about suicide and depression.

As popular hard rock/metal of the 00’s have merged with rap, like Linkin Park, or gone political (again), like System of a Down, some fans are left to wonder, what happened to the outright fun in metal?

Born from 70’s bands such as David Bowie, Alice Cooper, Black Sabbath, Aerosmith and KISS, Glam Metal took off in the 80’s, and producers found a formula for success. For every high-energy arena-rock song, a power ballad followed. For every Pour Some Sugar on Me, there was a Love Bites. For every Nothin’ but a Good Time there was Every Rose Has Its Thorn.

Heavy Metal had never been so exciting. The music was ripe with upbeat tunes. The concerts resembled a mixture of Fourth of July, New Years Eve and Halloween. Sure, these long-haired rockers got their kicks from hard drugs, liquor and dressing room sex during drum solos, but when has any genre of rock-n-roll been clean-cut? Some of these bands, especially Poison and Twisted Sister, were somehow considered cool despite wearing makeup and looking like chicks. Yet, the gimmick worked.

The fans had their look, too. The boys grew their hair long (sound familiar?), wore torn jeans, denim jackets and black t-shirts. The girls had big hair and wore lots of makeup. Couples made out to these songs. Does anyone actually do that with today’s answer to that music, bands like… Disturbed?

Def Leppard had two of the best-selling albums of the decade with 1983’s Pyromania and 1987’s Hysteria. Van Halen owned the charts in 1984 with Jump, Panama and Hot for Teacher. Guns N’ Roses crashed the scene with 1987’s Appetite for Destruction, taking Glam Metal into a new direction while making gossip-page headlines.

As for the alternatives: Punk was for the Mohawk-headed outcasts. Darker-themed metal, like the early Metallica and Megadeth, found a niche but didn’t go mainstream until the 90’s. Bands from the 70’s had to reinvent themselves, like Ozzy Osbourne, to stay relevant. In other genres, rap was just getting started, and didn’t toughen up until the decade ended. The best-selling wave of the era, Michael Jackson, came crashing down harder than any other.

The flavor of this 80’s brand of metal ended in late 1991, when Nirvana’s Nevermind hit the airwaves and Seattle brought grunge to the forefront of the charts with bands such as Pearl Jam and Alice in Chains. Beavis and Butthead made fun of glam bands on MTV, which demoted the videos to the late night Headbanger’s Ball. Several bands lost or fired prominent members, like Van Halen with David Lee Roth, and labels were quick to drop them and embrace the new sound. Suddenly, flannel shirts were in style and it was cool to say ‘life sucks’ again.

And now, here we are, in an era that will be better defined once we’re over the wave and a new sound emerges. Even Glam Metal, which is also called Hair Metal and gets mixed in with Arena Rock, didn’t get coined until after-the-fact. The 80’s power ballads are selling well on compellation albums today. The fans, the youngest ones staring ahead at their thirties, are now reminiscing about their glory days, remembering the times when these albums, the best of the 80’s Glam Wave, played continuously in their cassette decks: