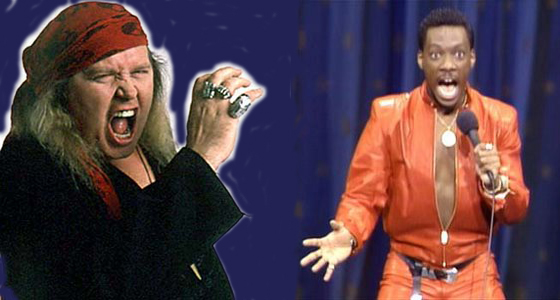 Comedian Tracy Morgan is taking quite a shellacking for an anti-gay rant he did during a stand-up routine recently. But rants like these used to be rehearsed and part of the routine. It’s been 22 years since the end of the 1980s, a time when stand-up comedians mercilessly made fun of homosexuals. Then came the 90s, the Democrats took office, and it was no longer acceptable. Sure, comedians still tell ‘homo jokes’ today, but not with the same ruthlessness as comic legends Sam Kinison and Eddie Murphy. Needless to say, few, if any, comedians would go on stage and do anything close to what those guys got away with in the 80s.

Do these bits hold up today? Though I consider myself a non-homophobic person and am for gay rights, these routines still make me laugh. And for the record, I have heard gay people say that these jokes are funny. The classic line is, If you can take a dick in the ass then you can take a joke.

So we’ll take a poll and only homosexuals can vote on whether these jokes are funny. Again, ONLY HOMOSEXUALS CAN VOTE. Videos are probably NSFW, but we don’t really know where you work, so use your judgment.