What ’80s Television Taught Us 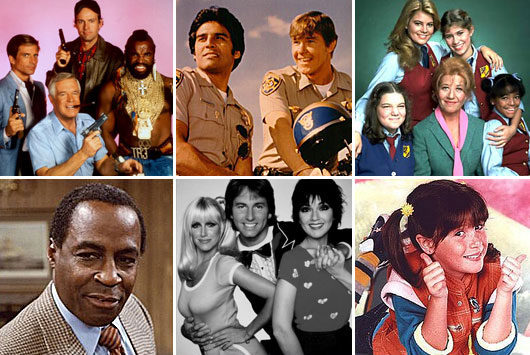 2011 marks the 30th Anniversary of 1981. Why is this significant, you ask? Well, because the ’80s marked perhaps one of the finest decades in television history. Never before or since have we had a more diverse array of shows from which to choose that probably featured a small black man or an alien. Possibly both. TV was borderline ridiculous with many shows airing for a few episodes, as well as many more covering nearly the entire decade before the ’90s completely ruined it for everyone. But what did we learn? What lessons could be gleaned from such a plethora of amazing television? Let’s investigate.

Aliens and Robots
Realism Be Damned

For some strange reason, ’80s television decided to show us potential glimpses of our futures featuring robots and sarcastic aliens. Some of the most popular programs included a late ’80s hit, Quantum Leap (a show starring Scott Bakula as Sam Beckett traversing the time-stream basically acting upon the one cardinal rule of time travel: changing everything possible); a modest hit starring Dezi Arnaz, Jr. and a weird floating sidekick called “Cursor” — the thing responsible for creating all the cool, blue-hued gadgets — called Automan; a ’70s hold-over that ran until ’82 with Robin Williams on coke hallucinations called Mork and Mindy; and, perhaps the most loved show of all, ALF, about a furry, cynical alien who ate cats, drove the Tanners mad and proved to the human populace that Dave and Alvin might be planets beyond Pluto.

But what did we learn from all of these pseudo-science shows? Maybe that intergalactic beings can be friendly and aren’t likely to probe us anally? Perhaps. Maybe that time travel is a possibility and rearranging things to better humanity isn’t necessarily the ‘Butterfly Effect’ everyone thinks it is (though Dr. Who taught us this a long time ago)? Could be. But I think ultimately what we gathered from all of this tongue-in-cheek sci-fi is the simple fact that Dean Stockwell reminded us of our grandfathers.

Black Comedies
It’s What We Were Talkin’ ‘Bout

Do you even realize how many comedies during the ’80s featured an all-black ensemble? Or, even a some-black ensemble? Well, lots. I’m not in the mood for counting right now. Let’s begin with the most obvious and, undoubtedly, most classic sitcoms of all time: Webster! Are you serious? This show was amazing! It had it all! A micro-sized semi-adult  named Emmanuel Lewis who was absolutely adorable and quite possibly a marionette (also black, but I’m pretty sure it wouldn’t have made any difference either way), a gruff but lovable father in Alex Karras and a semi-sexy but oddly aloof mom in Susan Clark. Lessons were learnt, smiles were… smiled and, presumably, Emmanuel’s diapers were changed.

The ’80s also had the wonderful Diff’rent Strokes, which had yet another tiny black man and had the distinction of beginning back in ’78. I was four. Anyway, this show made you believe that Conrad Bain and his daughter Dana Plato (white as you read about) would somehow van-solicit Gary Coleman and Todd Bridges into their ‘candy factory’ for the rest of their lives! Sweet, sweet realism. And, finally, The Cosby Show… need I explain? Just so much win from this show. More kids coming and going from this place than a pre-school playground, but it had Bill Cosby. And everyone loves Bill Cosby. And the best things about these programs were the constant barrage of lessons and learnings. Ah lessons, you taught us well.

Dramas Were Dramatic
And Prolific

If the televised Yin of the ’80s was the saccharine comedy, then the Yang was most definitely the ham-fisted dramas that seemed to plague every night of the week. First we had the patriarchal Dallas, that ran the entirety of the decade, ’78-’91; then we had the more matriarchal Dynasty from ’81 to ’89; Falcon Crest from ’81 to ’90, and Miami Vice coming in at a comparably paltry six-year run from ’84 to ’89. These shows barely scratch the surface of the long-running procedural dramas that included more cops, police men, detectives, and P.I.’s! But that’s another number.

The point here is, for the most part, each and every one of the aforementioned hour-longs were basically the same show starring many of the same people, only wearing hats. But did we, as a captivated nation, ever really learn anything from them? Yep. We discovered it was so much more fun to watch fake families violently hammer out their issues rather than turn down the tube and witness our own slowly strangling themselves into oblivion. Yay for TV!

For all the myriad police dramas that come and went over the course of the decade, for my TV watching buck, it was always Hill Street Blues that sucked me in with all its melodrama, morose over-acting and scathing discord. It sat smack in the middle of the ten-year block hanging out from 1981 through 1987, winning a metric butt-load of awards due largely to its melodrama, morose over-acting, and scathing… hey, wait a second… where have I heard that before?

Anyway, if you didn’t particularly feel like police procedurals that hit way too close to home, you could have watched things like, 21 Jump Street, Cagney and Lacey, Father Dowling Mysteries, Hardcastle and McCormick, and Hunter, each carving its own specific niche and their rampant desire to make every available actor and actress carry a gun. But what was ultimately learned here? More than you think. If you wanted to grow up to be a cop, the ’80s proved that regardless of your gender, age, or race, you were in. And they also proved if you were overweight and often complained you didn’t especially want to be a cop… you were still in.

Finally, there was the one, great shining beacon that ultimately defined television in the ’80s: stellar cartoons. The entirety of the decade was inundated by kid shows typically for the sole purpose of selling toys. You see, modern times are a bit less marketing oriented, and most shows (while often inherently stupid) don’t come attached to a product. The ’80s, on the other hand, were lousy with advert placements as actual programs! G.I. Joe: epic toys; Transformers: epic toys; M.A.S.K.: epic toys; She-Ra: slightly less epic toys. Anyway, you get the idea.

There was no better way to get kids to watch your cartoon than to solicit your own slice of merch. Would you have watched Jayce and the Wheeled Warriors if you didn’t know there were toys to be had? Would you have given Insectaurs a second look if the action figures weren’t so damn cool? I submit that we would not have. That being said, the toons were still amazing and, thankfully, short-run for the most part; kids had yet to be perpetually diagnosed with ADHD, so it was all we could do to sit still for 30 minutes let alone a few hours. And what we learned was obvious: kid shows sell. Were it not for these cartoons, the toy market would likely have stagnated amidst a choking supply of Lincoln Logs and Yahtzee games. The ’80s were about consumers and willy-nilly spending. Life was good. Tell ya what, the first person that gets on that TARDIS inventing thing, the ’80s are the first stop on my list.