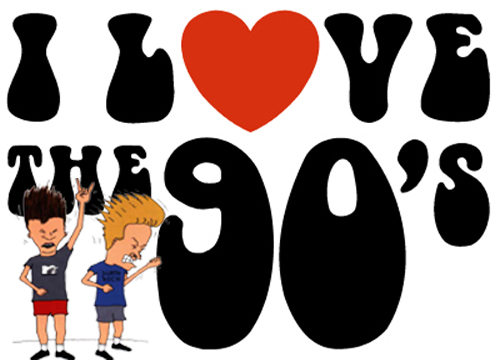 Somebody at some point in time came up with the idea that we need to be nostalgic for whatever decade it was twenty years ago prior to the decade that we are currently in. Sounds reasonable enough. With that in mind, it has been long enough now to miss the 1990’s. Yep. The 90’s began a full twenty years ago. It’s hard to believe, true, but it’s a fact. So let’s not put it off any longer and go ahead and get started on them warm fuzzy feelings of longing for the good old days that were whatever the 90’s were all about.

To get you started, we compiled a very short list of things worth missing about the 90’s. This is by no means intended to be comprehensive, I mean for Christ’s sake, Grunge music and the Seattle scene aren’t even on the list!  It is meant only to prime the pump of your own memories to help you find in your own heart what the 90’s meant to you, and then dwell on it. And listen, if memories of The Spin Doctors make you all bleary eyed and weepy, don’t be ashamed. It happened to us as well in our editorial office as well. Little miss Little Miss Little Miss Can’t be Wrong, what you gonna do to get into another one of these here rock ‘n roll songs? **sigh**

Remember that guy with the weird voice who sang that weird song about those weird kids back in 1993? We do and we miss him. Mmm Mmm Mmm Mmm.

Super Mario Brothers truly became super. The Legend of Zelda became more legendary than ever and Donkey has never been so Kong. You could play Sim City even if you didn’t have a computer! Super Nintendo, yeah. It was the shit. Remember when people would refer to something as “the shit” and it meant it was good? Times were simpler then. At Gunaxin, we remember!

1996. New picture broadcast of Jenni in her dorm room every three minutes. Watch Jenni balance her checkbook! See Jenni organize her sock drawer! Thrill to Jenni writing a term paper! Yep, web pioneer Jenni Ringley let you watch everything. Sometimes you even got to see her naked!

For many, the true definition of the 90’s in its purest form. Beavis. Butthead. The ultimate slackers. The archetypes of couch poatatodom. That’s right, “couch potatodom.” It’s a made up word meaning the ultimate state of being a couch potato. We can make up words if we want to. What are you going to do about it? Try making up your own words once in awhile. You will find it tremendously gratifying. Anyway, Beavis and Butthead- they started off on MTV’s Liquid Television and went on to have their own show, own album with Cher joining them on “I got you Babe” and then on to the big screen. Why hasn’t there been a second movie? Seems like there should be. Seems like there should have been three or four by now. Hey Mike Judge? What’s up with that, dude? Come on!

Good lord, where do we begin remembering just how funny SNL was back in the 90’s? David Spade? Yeah, we could start with him. His “Hollywood Minutes” were hysterical. Adam Sandler? Yeah. We could start here too. How about Rob Schnieder “Making Copies! All right!” But what about Mike Myers? Dana Carvey? “Party on Wayne.” “Party on Garth.”  Tim Meadows? Kevin Nealon? Molly Shannon? Will Ferrel? Chris Rock, Ana Gasteyer, Al Franklin, David Koechner… the list goes on! There’s just so many! Saturday Night Live was perfect in the 90’s… just…so…perfect. Oh yeah, and Chris Farley. Chris Farley lived in a van down by the river! Remember that? “I live in a van down by the river!” Just too good.

For two glorious years (1990-1992), Chris Elliot blessed us with the hilarity of this show on Fox. He was a paper boy, a 30 year old paper boy who lived with his parents. This show was mind bending. That’s the word for it. “Mind bending.” That’s kind of a cool phrase to describe things with, and so far, it hasn’t been over used by the media so it is still fresh and meaningful. Try using it in a sentence sometime, you’ll see what I mean. “Mind bending.” This show had a number of actors in it. They were as follows: Chris Elliot, Brian Doyle Murray (Bill’s brother), Robin Riker, Brady Bluhm, Taylor Fry, Elinor Donahue (yes, THAT Elenaor Donahue- the one from Father Knows Best),  and Chris’ real life poppa, Bob Elliot.

The forbidden dance of love- Lambada! The dance floor was inflamed with the passion of  this dance craze from Brazil, for a while. It was a craze, right? There was a movie about it, so it must have been. Viva Lambada!

Talk about innovation! It’s a cola beverage, and cola beverages- ALL COLA BEVERAGES! are brown in color. That is the conventional wisdom of cola beverages. But hey man, them geniuses over there at Pepsi Corp. have come up with something so radical, so new, so unbelievable mind bending (yes mind bending again) that it literally changed the face of carbonated beverage consumption FOREVER! Well, not forever. For awhile maybe. Actually it didn’t last too long. It tasted okay, I guess. Nothing special, really. But it was kind of cool while it lasted.

Running from 1987 to 1997, this was THE show to watch in the 90’s. A couple other examples of THE show to watch in the 90’s, of course, were Twin Peaks and Northern Exposure, but screw them, we’re remembering Married with Children right now. Kelly was hot! Al Bundy and Peggy and little son Bud were, like, dysfunctional and stuff and they lived in Chicago. It was, and still is on DVD, a great show! Get yourself some episodes and DVD and experience the wonder of it all  for the first time all over again. It did, of course,  star Ed O’Neill, Katey Sagal, Christina Applegate, David Faustino, Amanda Bearse, David Garrison (seasons 1-4), and Ted McGinley (seasons 5-11). Love and marriage, love and marriage go together like a horse and carriage….

You liked The Spin Doctors, didn’t you? They were good. Their album, Pocket Full of Kryptonite was released in 1991 with their two big songs, Little Miss Can’t be Wrong, and Two Princes on it.  There were other songs on it too, but those were the most popular. The album went Platinum. It really did. No joke. Wikipedia says so.