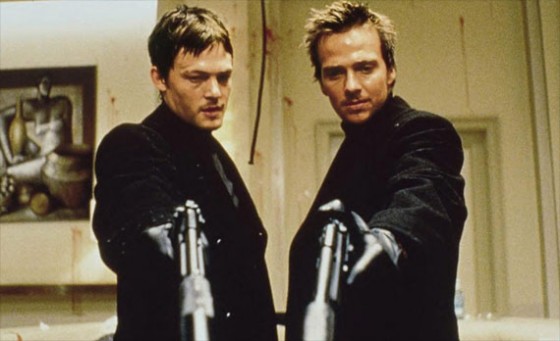 The little independent low budget Irish crime thriller, The Boondock Saints, might be coming to a small screen near you soon. That is if we’re to believe the flick’s writer/director Troy Duffy. In a recent interview with some site called We Got This Covered, the Duffster revealed he was in talks to resurrect his one and only creative contribution for television. Here’s what Troy boy had to say:

We’ve been approached to do a possible Boondock Saints TV series. So the fans may be getting a part 3 as a television show. We might be able to pull that off…. I actually called both Sean and Norman and they both said “hell yeah, we’ll drop everything.”

According to Duffy, a network in the vein of AMC or HBO would be the likely destination, in order to maintain the abundance of expletives and violence that flood the world inhabited by the gun-toting MacManus Brothers.

Fans of the movie will no doubt be pleased by this news, but they should temper their excitement. Duffy is a fierce self-promoter who has managed to milk the Boondock property for over a decade, so he certainly is steadfast enough to cut a deal. But haven’t we seen this show before? It was called Brotherhood an ran on Showtime for three seasons from 2006 to 2008.

As for the stars. Norman Reedus currently has a part on The Walking Dead; a train I’m sure he’ll want to keep riding, unless he gets whacked, which is possible in a zombie apocalypse. Meanwhile, Sean Patrick Flannery was in Mongolian Death Worm last year… methinks he’s double-crossing his fingers Duffy isn’t blowing smoke.

The original movie isn’t my shot of whiskey, but I did quite enjoy this scene: