A Brief History of Tekken

The long running Tekken series is one of video gaming’s finest examples of the beloved “a couple of guys punch and kick the shit out of each other” genre. With the recent announcement of Tekken 7 we’ve decided to take a look back at history of the franchise. And since completely gratuitous eye candy is a proud tradition of the fighting game genre we’ve decided to take a look back at the history of that too. For this feature, we’re going to focus on numbered game releases, and not the numerous updates, spin-offs and movies.

Tekken was one of the earliest fighting games to be in 3D, which places it in the period of video game history where games were going to the third dimension but weren’t very good at it yet. Still, for the time it was pretty damn good, and it offered up some innovations to the genre, most notably more intuitive controls. For a new franchise it sold very well, probably because it avoided being a Street Fighter rip-off like pretty much every other fighting game that came out in the mid 90s. At this point the Tekken girls only looked vaguely human. There was a long, long way to go in the shameless eroticism department.

Tekken 2 only came out a year later, but it made a few improvements to the fledgling series. The basic game was still pretty much the same, but the graphics and animation were improved significantly. It looked a lot more realistic, and this, combined with its focus on at least somewhat believable martial arts combat, started to attract fans who were sick of ripping each others spinal cords out in Mortal Kombat. Plus you could play as a kangaroo, which was awesome. 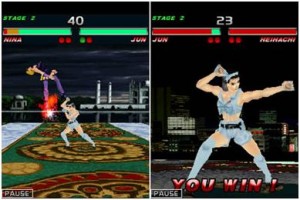 Still far more blocky than curvy, but we’re getting there.

Tekken 3 was received incredibly well both critically and commercially, making it arguably the best game in the series. Again the graphics and animation got an overhaul, but the real improvements in this version came to the gameplay. Lots of little changes made things smoother and gave players many more options for approaching a fight. Oh, and continuing the animal theme, you could play as a bear. Being able to control a giant bear and maul people is, frankly, a feature that should make its way into far more video games.

Tekken 3 didn’t offer much improvement in the sex appeal category, but notice the trend towards gratuitous cleavage and unnecessarily short pants.

Tekken 3 was a tough act to follow, and the series’ fourth installment is generally considered to be the weakest of the bunch. It’s not an awful game by any means, but it had a few flaws that prevented it from getting the reception of its predecessors. The jump from the Playstation to the Playstation 2 provides some welcomed graphical improvements, and for its time the game looked fantastic. But a few changes to how it was played upset hardcore fans, as it became easy for skilled players to use simplistic or just plain cheap tactics to win. Of course, that didn’t affect the 99% of people who play fighting games by mashing buttons at random and hoping for the best, but it did prevent Tekken 4 from getting the critical praise the series had become used to. 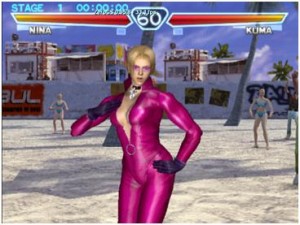 Tekken 5 was a return to form for the series, as it received critical success and sold well. It turned out to be one of the nicest looking games on the Playstation 2, flaws in the gameplay were addressed and some of Tekken 4’s more experimental features were toned down. In addition, the game offered a huge cast of characters and a nice variety of modes. This tenth anniversary release proved to be the game that many people had hoped Tekken 4 would be, and it performed well against the many, many other fighting games that were flooding the market around this time. 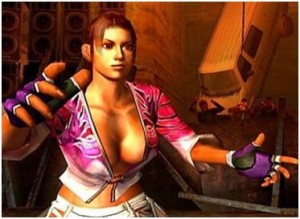 Tekken 5 almost represented the point where we could jerk off to games guilt free, but the technology of the day was just barely holding it back.

The most recent incarnation of the franchise was received with critical and commercial success. The jump to the modern generations of consoles made for some gorgeous visuals and animations, and it offered up the largest character roster the series has seen. It also had online multiplayer, which means you were able to hear some gruff drunk guy call you a faggot as he beats the crap out of you with a little girl, without having to leave the comfort of your house! Yup, Tekken 6 had it all. 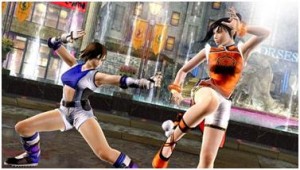 Tekken 7 news has been flooding the internet over the past two weeks, including this trailer released at SDCC.

Time will tell how this most recent installment will add to the legendary franchise, however one thing is certain, the ladies will be fighting in tiny little outfits.