A Dissertation of Ice & Fire – Episode #4

Another fantastic episode of Game of Thrones is of course paired with another week of A Dissertation of Ice & Fire. 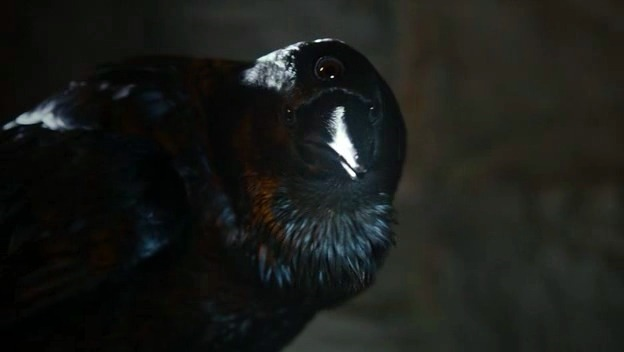 The start of this episode was something that many purists of the series were thinking was being abandoned from the source material. I am speaking of Bran’s dream sequence featuring the three-eyed crow. It was brief and it is still unclear if they are going to portray this in its entirety on the show or if it was just a nod to long-time fans of the series. But, damn, did that thing look creepy with three eyes.

Bran is quickly awoken from his dream to Theon Greyjoy being his usually snarky self in telling Bran that he needed to get his broken ass up and receive Tyrion Lannister who has returned to visit him. This is when we get our first real glimpse of Hodor, the massive, yet “slow” servant who will be Bran’s primary form of transportation for the foreseeable future. He takes Bran to the main hall of Winterfell where his older brother, Robb, is having a pretty shitty conversation with the dwarf. It isn’t until Tyrion offers up Bran the plans for a special saddle to help him be able to ride a horse still in his crippled state that Robb lightens up on him. We also get our first look at Greywind, Robb’s direwolf. Tyrion refuses Robb’s change of attitude and is on his way. In a scene added to the show that never happened in the book, Tyrion and Theon spar once outside the castle. It’s a spectacular scene because of two things. First, every scene that Peter Dinklage is in as Tyrion he completely steals the show. I’ve been beating the Dinklage for an Emmy since the very first episode and I don’t see that slowing down anytime soon. Secondly, it gives a nice chunk of backstory to the Iron Islands (Theon’s home) and a bit more info as to how he became a ward in service to the Starks. Terrific scene. 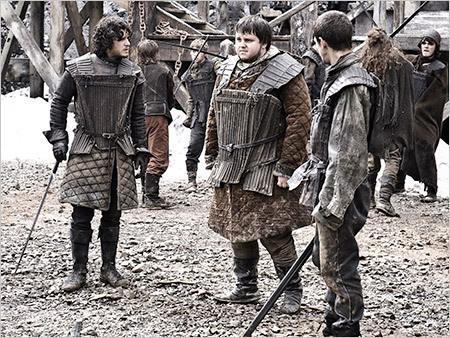 As we move north to The Wall, it is time for another introduction to a major character. And I must say that John Bradley-West as Samwell Tarly is as if he was ripped straight out of my imagination when I first read the book. His look and the way he portrays the character is spot-freaking-on as the craven Sam. But he quickly befriends Jon Snow and the two have instant charisma on-screen together — something that is important down the road. But as Sam is routinely picked on by Pip, Grenn and Rast, Jon decides to take Sam under his wing and protect him. All Jon’s homeboys agree to take it easy on Sam except for Rast, which I never really understood. Picking on the fat kid, Rast? Last time I checked the scale, you were no Mr. Universe yourself.

However, Jon finds a proper way to get Rast to change his mind as we are, at long last, introduced to his direwolf, Ghost. And the wait was certainly worth it, as Ghost looks fantastic. The red eyes look completely real and aren’t corny CG and his snarling snout would have scared me straight. I’ve heard some complaints about how he wasn’t big enough and that he actually growled (Ghost was silent in the books), but again it didn’t bother me too much. If the direwolves being smaller keeps them away from using straight up CG wolves in the future, I will die happy. As for the growling, there are bigger things to nitpick than that. I was just happy to see one of my favorite characters in the series (yes, Ghost DOES count as a character).

Across the Narrow Sea, we continue to see what a major douche Lord Viserys is as he abuses Doreah and tries to attack his sister again. But this time, Daenyrus is having none of it as she strikes him across the face and warns him that if he ever raises a hand to her again it will be the last time he has hands. I have to say that I am quite pleased at how well the series is showing her maturation from a simple, scared girl into the beginnings of a strong Khaleesi.

Back at Kings Landing, Ned is starting to dig deeper into the mystery of Jon Arryn’s death and it is getting juicer each week. We also meet Gendry, one of King Robert’s bastards, who ends up being pretty important in the next couple of books. But the real star in Kings Landing for this episode is that of Petyr Baelish. Without giving too much away to non-readers, I love how they’re portraying him as a questionable ally. He is the essence of a “grey” character. And actor Aidan Gillen is playing the part brilliantly.

Then we get more characters introduced for the tournament, such as Ser Hugh of The Vale and Gregor Clegane (referred to as “The Mountain” for his massive size). Hugh is relevant for all of ten seconds before Gregor’s lance splinters into his neck and Hugh bleeds out in quite a graphic death scene right in front of Sansa and Arya. Then there is a pretty significant deviation from the novel as Petyr tells Sansa the story of how Sandor’s face was burned by his big brother, Gregor. In the novel, a very drunk Sandor tells her this story himself in a fit of rage since she will not look him in the face when she speaks to him. This is something that will make big fans of the Hound unhappy, for sure, but I’m hoping they don’t cut out the Sandor and Sansa stuff completely. It becomes quite important down the road.

We cap off the action back at The Wall with a pretty solid scene featuring Ser Alliser Thorne chastising Sam and Jon for their childish behavior. I will admit that I had reservations about who was cast as Thorne (Owen Teale), but he shut me up this week. A spectacular scene that really drove a point across as to how serious things can get up at The Night’s Watch.

In the closing scene of “Cripples, Bastards & Broken Things,” we get probably the best moment thus far from Michelle Fairley as Catelyn, where she calls for men who have allegiances to Winterfell to give aid in the apprehension of Tyrion Lannister for conspiring to have Bran murdered. Another cliffhanger ending that certainly will have viewers tuning in next week.

A great build-up to get to this point, but the shit is about to hit the fan and I’m not exaggerating. This was the point in the novel where I could not stop reading.

As always, my “Bests” of the night:

As mentioned above, Gillen is absolutely killing it as one of the central characters of the series. And the best is yet to come. An honorable mention to Owen Teale for his monologue to Sam and Jon in the mess hall (mentioned above).

When Jon is confiding in Sam that he isn’t the only guy there who has yet to pop his cherry with a moving story about how he just couldn’t bed the whore, Roz, for fear of making a bastard like himself, Sam replies for a second time with, “So, you didn’t know where to put it.” Classic.

Perhaps it was just the jubilation of finally seeing Jon’s direwolf on-screen all grown up, but he was a sight to behold for sure. A solid snowy-white beast with blood red eyes and a fierce look, exactly as described in the source material. Welcome to the show, my friend.

Some things to look for next week is the conclusion of the tournament with Loras Tyrell making his series debut as well as Sandor and Gregor showing they aren’t quite so fond of each other. Also, what is to become of Tyrion? Seemingly the only Lannister who isn’t a complete scumbag, how does Catelyn intend to bring the imp to justice? Will Ned come closer to discovering the truth of Jon Arryn’s death?

Also, how will King Robert react to the news that Daenyrus Targaryen is with child? Will Arya’s dancing lessons continue to progress well and will Sam finally learn to sack up and be a man at The Wall? All should be revealed in the next episode this Sunday in “The Wolf & The Lion.” Catch the preview below.