A Dissertation of Ice & Fire – Episode #8 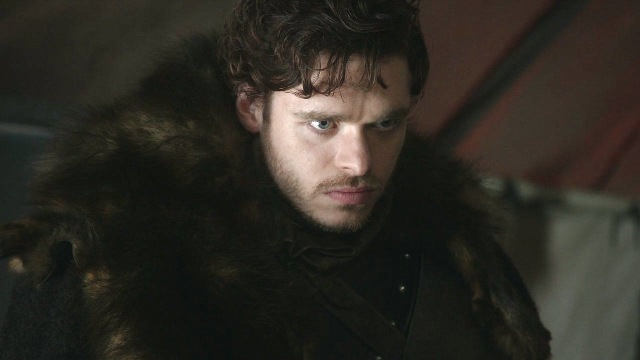 While HBO is easily the best network on television, one thing that I’ve always hated is how fast the seasons are over. Unlike the traditional 22 episode seasons that most network shows get, the premium monster has always kept it at 13 or less. With Game of Thrones, we’re only getting 10 this first season. This makes me sad that we’re already on our 8th installment of a Dissertation of Ice & Fire.

For those still whining about wanting more action, they got their fix early this week as we see the Red Guard slaughtering anyone who is loyal to the Starks. Even the poor bastards who were simply packing up their things to take them back to Winterfell get slaughtered. Septa Mordane hears the commotion and commands Sansa to go bar herself in her room as she confronts the Lannister men. We do not see her fate, however. The whole time we see Arya and Syrio are still practicing their dancing lessons before Meryn Trant and a group of five Lannister guards barge in and command that Arya come with them. Syrio points out that Ned wouldn’t have sent Lannister men to retrieve his daughter and refuses to let Arya go with them. In a scene almost exactly like the book, Syrio takes out the five guards with a wooden practice sword. One of the best choreographed fight scenes we have yet to see here by the Braavosi swordsmen. Meryn then decides to get his hands dirty and eventually breaks Syrio’s wooden sword, but he will not back down as he gives Arya time to escape. And, in helping keep many a theory on Syrio’s fate intact, we do not actually see him die onscreen. Only time will tell. 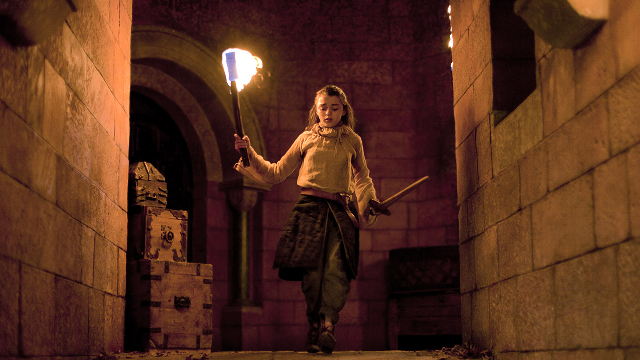 Arya makes her way out to the courtyard where she finds her sword, Needle. An idiot stable boy decides to play hero and detain her only to find needle stuck in his belly. This event plays a large part in the transformation that Arya is about to make. She flees and we do not see her again this week. In the black cells, we see the imprisoned Ned has a visitor. Varys tells him that everything for his family has gone wrong and he is a dead man, basically.

At The Wall, the men bring back the bodies of a man who the arm that Ghost found belonged to. Sam notes that the corpse has no smell. Then we see Jon getting the news of his father’s imprisonment as he tries to go about his everyday duties with it weighing heavily on his mind. But Ser Alliser Throne decides to be a serious dick and taunts Jon about not only being a bastard, but the bastard of a traitor. Jon angrily goes after Thorne but is restrained by Sam, Grenn and Pyp. Commander Mormont is upset and tells Jon that he is to be confined to his quarters. He is awakened later by the sound of Ghost growling and trying to get out of the room. Jon goes to check it out and is attacked by a reanimated corpse… the same one who they brought back earlier. Jon stabs him numerous times to no effect until he is able to break free and grab Lord Mormont’s lantern and throw it at the creature. Jon and Mormont take off as the corpse burns. 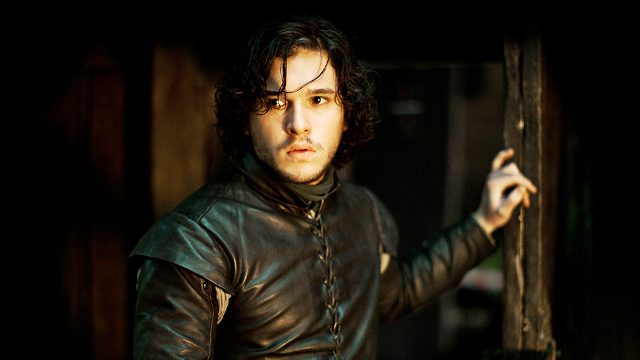 Back at Winterfell, Robb gets the news from Sansa about what is happening and decides it is time to call his banners and go to war. We get a great introduction to Greatjon Umber and I was ecstatic to see Greywind biting off a pair of his fingers when he threatened Robb. And, true to the source, Umber replied to this by laughing and deciding to get behind Robb as his leader. Robb says his goodbyes to Bran and tells him that he is Lord of Winterfell now. We also get to see Rickon again who is quite sure he will not see his family members who are riding off to war again.

We finally catch up with Tyrion and Bronn when they are ambushed by Shagga and other clans of mountain men. Tyrion bargains for his life by offering them riches and better weapons once they make it to see his father, Tywin. Once they make it there, Tywin agrees to “pay Tyrion’s debts” as a Lannister always does, but only if the mountain men fight in the upcoming war for him. They agree, but only if Tyrion joins them on the front lines, as his life is in debt to them. This is the first time we see one of Tyrion’s great plans backfire, as he is no warrior.

Across the Narrow Sea, Dany is quite bothered at how the Dothraki have attacked and maimed a peaceful village. She commands that the men do not rape the women and this upsets of the warriors who demand that the Khal make the situation right. Drogo understandably sides with his wife and the warrior challenges him to a duel over the decision. He cuts Drogo on the chest, but the Khal chooses to drop his weapon and fight him with his bare hands. In the end, the Khal rips the guy’s throat and tongue out in one of the biggest moments of badassery I’ve ever seen. If anyone had doubts that Jason Momoa could play Conan in the upcoming summer flick, I think he has proved it the past two weeks of this show. I’ll say it just like I have since he was on Stargate: Atlantis, Momoa should and is likely to be a star. But back to the show… Dany is concerned for his wound and chooses one of the women she saved from being violated to take care of him. She is a witch named Mirri Maz Duur and she is someone that becomes very important very soon. 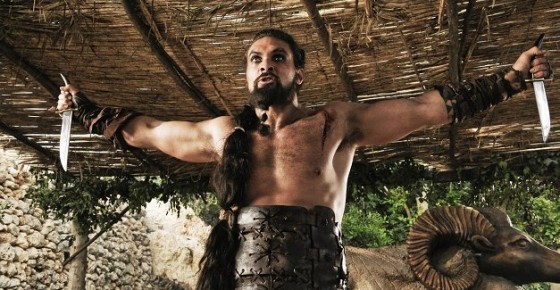 In the final scene at King’s Landing, we get Grand Maester Pycelle declaring new assignments for everyone under King Joffrey’s reign. This includes them forcing Ser Barristan into retirement. Naturally, this doesn’t go over well with the Commander of The Kingsguard. He strips off his cloak and armor and unsheathes his sword before throwing it on the ground and telling Joffrey to add it to his throne. This is another scene that was word for word from the novel. Then we have Sansa pleading for her father’s life. Joffrey seems not to like the idea but tells “his Lady” that he will not execute Ned if he confesses to his treachery and treason. Sansa says that he will as we fade to black.

All in all, this was simply a smashing episode that may be the most loyal to the books yet. This is probably due to the fact that George R. R. Martin himself penned this episode. We got to see plenty of the direwolves, which has been my only complaint with this adaptation yet, as well as Drogo being a straight up ass-kicker. We also got to see Robb Stark coming out of the background and showing his importance in this series. But so much still has to happen in these final two episodes and this episode felt like a transition and set-up for the finale. It’s full speed ahead from here and I can’t wait. 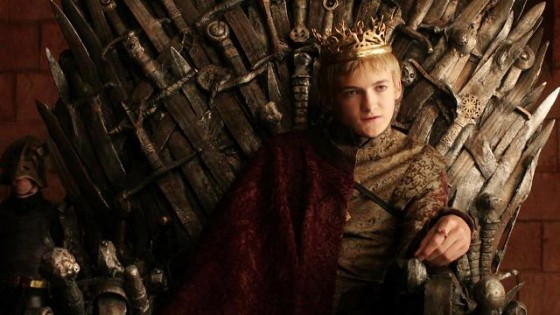 I will be out of the country for the next two weeks  and won’t be able to catch the episodes live. So there will be no review for episode 9 next week. But I will do one for both 9 and 10 when I return. I’m sure it’s going to be phenomenal. Onto the Bests of the week:

After spending weeks in the background of the series, it is finally time for “The Young Wolf” to shine. And shine he did in this episode with intensity and demeanor. From his confrontation with Lord Umber in the main hall, to his declaration against Tywin Lannister, Madden completely owned the screen this week. Which is very encouraging with how much his role is about to expand in this saga.

To add to his victory in the previous category, the eldest Stark son also ruled the one-liners for the evening. First, when being told to come to King’s Landing and bend the knee for the new King, he simply replies, “Joffrey puts my father in chains, now he wants his ass kissed?” Brilliant. But it is only second to the line he lays on a captured Lannister spy when he makes the controversial decision to let him go. He leans forward and quietly says in his ear, “Tell Lord Tywin, winter is coming for him. Twenty thousand northerners are marching south to find out if he really does shit gold.” This one actually got a nerdy fist-pump from me in my living room.

When Samwell is telling his brothers in black what he had read about White Walkers he added that he hoped The Wall was high enough. This leads us to the stunning visual as we crawl upwards and upwards and upwards to the massive ice wall. Just as stunning as it was in my imagination while reading the book.

Looking forward to next week, we are finally about to get some answers. Will Ned bend the knee and put his honor aside by confessing to a crime he did not commit to save himself? Does Robb and his forces have a chance against Jaime and his overwhelming numbers in the upcoming battle? Will Tyrion survive going to the front lines to pay his debt to Shagga and his clansmen? Will the Kahl’s injury be a concern? Will Jon break his vows to go help his brother Robb in the war? And what has become of Arya? All this and more get answered in the final two episodes. Get your popcorn ready and check out the preview below.