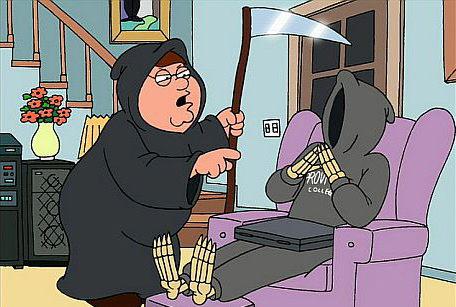 For some odd reason -like maybe Heaven has a quota to fill- the death toll of late has been brutal. Of course (not that the media would have it any other way) the stories on and about Michael Jackson’s death keep overflowing the entertainment news headlines, even though many other contributors to the ‘arts’ have passed as well. Sometimes we, the breathlessly anticipatory public, forget that people of every background and contributory history die every minute, yet we’re never made privy to their demises as much as, say, the King of Pop. And so it goes. Consequently, it’s really frowned upon to take light the passing of anyone, regardless of the fact whether or not you believe that an ad for K-Mart touting, ‘Boys underwear half off’ is what really did the Moonwalker in. Ha ha. Anyway, here’s a dozen deaths that really are kind of funny, in a sick, twisted way. Laugh you’re way to Hell! Oh, and since few can say as succinctly as the good folks at Wikipedia, each has an excerpt describing their awful passings.

Imagine, if you can, swinging a baseball bat so damn hard it ruptures one of your internal organs. Now imagine the absolute excruciating pain that would follow ending in something akin to death. You know: death. Eat your heart out, Prince Fielder!

Here’s the Wiki report on this ball player’s untimely demise: “There are several explanations for his death. The generally accepted explanation, which has existed from the time of his death, is that he fatally injured himself while playing baseball. At the time, players swung massive bats almost entirely with their upper body; it is said that a particularly hard swing from Creighton – some versions of the story have it as a home run swing – caused an internal (bladder) injury. Remarking to teammate George Flanley that he had perhaps snapped a belt, he continued playing but was in extreme pain hours later. A few days later, he died at his parents’ house.”

He Kicked The Bucket, and, Apparently, Himself

First of all, you’re a military leader with the added ‘crutch’ of a wooden leg to slow your ass down. Then, in an unsuccessful attempt to defend a small village, you are promptly beaten to death. With your own leg. By your own men. Sucky, sucky life.

Here’s the Wiki report on this English Army Officer’s beating: “In 1649, Oliver Cromwell’s forces attacked the town in the Siege of Drogheda, one of the most vicious episodes of the Wars of the Three Kingdoms. When the town was stormed, the garrison and many civilians were massacred by the victorious Parliamentarian soldiers. Aston agreed to surrender after a parley on the bridge but Cromwell’s officers were ordered to put the entire town to the sword. It is widely believed that the parliamentary soldiers killed Aston by bashing his brains out with his own wooden leg.”

Lets Just Say, The NEWS Did Them In

I can sympathize with the desire to collect as though a pack-rat of sorts for ‘collecting’ purposes. I used to have a ton of Star Wars stuff. I wasn’t, however, ever worried about dying in an avalanche of toys.

Here’s the Wiki entry on these compulsive hoarders: “On April 8, 1947, workman Artie Matthews found the body of Langley Collyer just ten feet from where Homer died. His partially decomposed body was being eaten by rats. A suitcase and three huge bundles of newspapers had covered his body. Langley had been crawling through their newspaper tunnel to bring food to his paralyzed brother when one of his own booby traps fell down and crushed him. Homer, blind and paralyzed, starved to death several days later. The stench detected on the street had been emanating from Langley, the younger brother.”

How Many Idiots Does It Take To Change A Light Bulb?

Ya know what, if ever I need to change a light bulb while standing ankle-deep in water, I deserve the imminent demise coming to me.

Here’s what Wiki says about this musical clean freak: “After working in Switzerland, on Saturday, March 11, 1978 he returned to his Paris apartment in order to appear the next day on “Rendez-vous du Dimanche” with TV host Michel Drucker. While standing in a filled bathtub, he noticed a broken light bulb. His well-documented obsession with cleanliness and order got the better of him, prompting him to try and fix it. He was accidentally electrocuted.”

You know how on The Flintstones when the guys use shells full of bees to shave? This could rightly be just where Hanna Barbera got the idea from.

Wikipedia here has the description of her horrible demise: “One day in March 415, during the season of Lent, her chariot was waylaid on her route home by a Christian mob, possibly Nitrian monks led by a man identified only as “Peter”.
She was stripped naked and dragged through the streets to the newly christianised Caesareum church and killed. Some reports suggest she was flayed with ostrakois (literally, “oyster shells”, though also used to refer to roof tiles or broken pottery) and set ablaze while still alive, though other accounts suggest those actions happened after her death.”

Have you ever felt the edge of an Oyster Shell? Case closed.

All thanks to this guy, with a little help from Mary W. Shelley of Frankenstein’s fame, we have come to know and love those ragged, tomb-scented, walking dead. Zombies. No wait, mummies.

Wiki enlightens us to this poor schlub’s painful death: “The 5th Earl was an enthusiastic amateur Egyptologist, undertaking in 1907 to sponsor the excavation of the royal tombs at Thebes by Howard Carter. It was in 1922 that they together opened the tomb of Tutankhamun in the Valley of the Kings, exposing treasures unsurpassed in the history of archaeology. Several months later, on April 5, 1923, Carnarvon died in the Continental-Savoy Hotel in Cairo. This led to the story of the “Curse of Tutankhamun”, the “Mummy’s Curse.” His death is most probably explained by blood poisoning (progressing to pneumonia) after accidentally shaving a mosquito bite infected with erysipelas. His colleague and employee, Howard Carter, the man most responsible for revealing the tomb of the young king, lived safely for another sixteen years.”

Don’t mess with the Tut.

“Hey, Sir Pike, let’s go over the plan again: You hide under the bridge. The enemy will be coming forthwith, you will stab upward and skewer them! Oh, and whatever you do WATCH MY ANUS!”

Wow, Wikipedia proves once and for all that bridges and war don’t mix: “Although the details have been called into question by a few historians, his death may have been particularly gory. As recounted by Ian Mortimer:
“[The 4th Earl of] Hereford led the fight on the bridge, but he and his men were caught in the arrow fire. Then one of de Harclay’s pikemen, concealed beneath the bridge, thrust upwards between the planks and skewered the Earl of Hereford through the anus, twisting the head of the iron pike into his intestines. His dying screams turned the advance into a panic.”

Killed By An Evil Robot at The Kawasaki Plant

What could honestly be worse than being one of the first to work with one of the original work-place robots only to be inadvertently shoved into it’s inner workings? Maybe being chased through time by a killer terminator, I guess. But this is a close second.

Wikipedia doesn’t care for Asimov’s 3 Laws: “One of the first individuals killed by a robot, Urada was a 37-year old maintenance engineer at a Japanese Kawasaki plant. While working on a broken robot, he failed to turn it off completely, resulting in the robot pushing him into a grinding machine with its hydraulic arm. He died as a result.”

Robots in disguise, my ass.

Caught Up In His Work (Sorry)

All Doug McKay ever wanted to do was make children happy by working in amusement parks on roller coasters. That is exactly how his epitaph reads, by the way.

This is the only Wiki info I could find on this guy: “Doug McKay was killed at the Island county fair amusement park when his arm was caught as he sprayed lubricant on a Super Loop 2 circular roller coaster. The ride was in operation at the time and he was pulled 40 feet in the air before falling and landing on a fence.”

The ‘Hottest’ King of All Time

I’m sitting here reading this Wiki entry and as funny as I’d like to be about it, for some reason I just can’t seem to find the words. Seriously. At least he was par-boiled before his friends consumed him, right?

Okay, there’s awful and then there’s this, from Wiki: “As his suppression had become a political necessity, he was routed at Timişoara (Temesvár) by the combined forces of John Zápolya and István Báthory. He was captured after the battle, and condemned to sit on a heated iron throne with a heated iron crown on his head and a heated sceptre in his hand (mocking at his ambition to be king). While Dózsa was suffering, he was set upon and eaten by six of his fellow rebels, who had been starved beforehand.”

My goodness. I’m going to throw up…

My wife always wanted a pet monkey. They’re cute, cuddly, and chock full of horrendous diseases and the wanton desire for murder. I wonder where I can get one?

Wiki proves once again that being anywhere near Delhi is dangerous: “Surinder was the Deputy Mayor of Delhi. He served as a member of the Bharatiya Janata Party and was elected councilor for the Anand Vihar ward in April 2007.
On 20 October 2007 Bajwa was attacked by a group of Rhesus Macaques at his home and fell from a first floor balcony, suffering serious head injuries. On 21 October 2007 he died from those injuries.”

I’m not sure why a donkey eating figs is funny, but reading the line a few times over is enough to crack a smile.

And, in at Number One, this poor Philosopher lost his shit: “As both a prolific writer (he is said to rarely have gone without writing 500 lines a day) and debater, Chrysippus would often take both sides of an argument, drawing criticism from his followers.
Chrysippus is said to have died in a fit of laughter; having given wine to his donkey, he died of laughter after seeing it attempt to eat figs.”

Now THAT is funny.