The current line on the Super Bowl has the Pittsburgh Steelers favored by about a touchdown or so over the Arizona Cardinals. The line may shift slightly in the hours leading up to kickoff, but you know Pittsburgh will be a clear favorite. For something a little different, the Over/Under has been sitting at about 46½-47 if you want to bet the total score.

At least both heads and tails are the same odds. It wouldn’t make sense otherwise. So maybe there is some logic to this whole thing. Alright then, let’s move on to Super Bowl predictions…

If Barack Obama picks a team to win Super Bowl XLIII during the Super Bowl Pre-Game show, will the President’s pick be correct? (SportsBetting)
Yes: -160
No: +130

Will Matt Millen pick the correct team to win Super Bowl XLIII during the Pre-Game Show? (Bodog)
Yes: -225
No: +185

What Color will Bill Bidwill’s bow tie be (Bill Bidwill must wear a Bow Tie on Camera during the game for wager to have action)? (Bodog)
Red: -600
Any Other Color: +400

Really, the less Bill Bidwill seen the better. Alright, let’s move on to the National Anthem…

During the Singing of The Star Spangled Banner will Jennifer Hudson Lip-Sync any part of the Song? (SportsBetting)
Yes: +115
No: -145

The question here is, how do you actually know if you’ve won? Can you see lip-syncing through your television? It might not be so obvious. At least this next bet has a firm winner…

I like the over on that one, but that’s just me. So the National Anthem is over, which means we get Al Michaels and John Madden talking at us. They may or may not say anything worthwhile. Any bets on them? Sure! 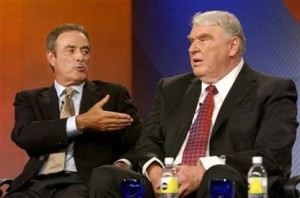 Too bad we probably won’t get Madden talking about his six-legged turkey. Maybe instead he’ll mention his great Popcorn Popper? Probably a no on that one too. Let’s just move on from Madden and assume we make it to halftime. How about some Bruce Springsteen bets?

Halftime is over! And for those of you’ve that watched, you were treated to another act that was more relevant twenty years ago than today. That’s okay, I don’t listen to much music of today anyway. To this point you might notice I’ve largely skipped bets on the game. Those aren’t ridiculous enough on the whole. Except with the refs. You never know with them, and this has been a bad year overall for referees, so let’s throw this one in…

What will be the result of the first coaches challenge in the game (Wager is official once either coach challenges a play? (Bodog)
Play Overturned: EVEN
Play Stands: -130

Given some of the calls this year, I don’t know what’s a good bet here. So let’s hope there’s no major controversies and just fast forward to the end of the game. You know when the Gatorade showers start to commence. Which brings us to… 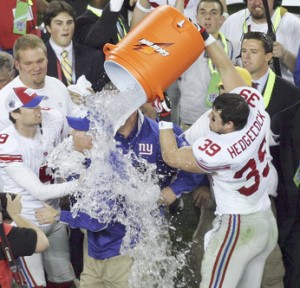 Time on the Game Clock When the Winning Team Attempts to Dump Gatorade on Head Coach? (SportsBetting)

Not a totally crazy bet, so let’s get more in depth on this Gatorade issue:

Just a note, “clear/water” has been the winner in each of the last three Super Bowls. Might be worth a shot, even if I’m personally hoping for blue. And one last Gatorade related bet…

What side of the ball with the Players that perform the Gatorade Shower be from (Players must be holding a part or piece of the bucket to be counted towards wager. If there are players from both sides of the ball involved in the actual dumping of Gatorade then Wagers are No Action)? (Bodog)
Offensive: EVEN
Defensive: -140

Damn those offensive players hogging all the Gatorade glory! Okay, now the game is over. Still a few bets to cover. First, let’s start with the commericals. They’ve all aired. So who’s the winner there? 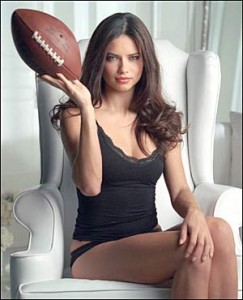 Bud’s always a good bet, but not much money to be made on that one. What about the ratings?

These are supposed to be smaller markets. Not exactly New York and Boston from last year. Maybe the under is a worthwhile bet (like I really have any idea what’s a good bet here)? Whatever the correct answer is, let’s make sure not to forget about Brenda Warner…

How Many Times will NBC show Brenda Warner on TV during the Game (Live pictures only, Any Taped Pictures or Past Video does not count towards wager)? (Bodog)
Over 2½: +135
Under 2½: -175

Which brings us to the MVP. Not who will win. That’s not ridiculous enough. How about who he thanks? 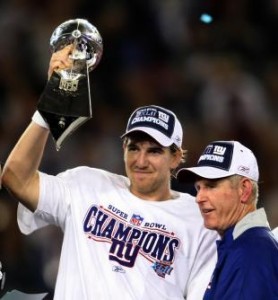 I think you know where Kurt Warner is going first if he wins (Hint: it’s God). He may pushing the odds on God a bit since he’s a prime candidate to win MVP. Only Ben Roethlisberger has better individual odds. If you think the Steelers will win, maybe this is one instance where you bet against God? That is if he doesn’t smite you.

Well that wraps up our rundown of ridiculous Super Bowl bets. If you’ve gotten this far, here’s a table of actual spreads and over/unders of all the Super Bowls: