The current line on the Super Bowl has the Indianapolis Colts favored by approximately five points or so over the New Orleans Saints. This pending the latest Dwight Freeney injury news or late public money wagers, which are prone to shift the line once again before kickoff.  But barring a Peyton Manning late night hooker escapade, you know the Colts will remain a mild favorite for the game. The game is also expected to be a shootout between the two high-powered offenses, as the Over/Under is hovering around 56½ points. It’s another bet to consider if you would rather root on the final score instead of specific teams involved.

Of course, that’s not the extent of Super Bowl betting. In fact, we’ve barely scratched the surface. What about the grand world of Prop betting? It’s something made famous after William “the Refrigerator” Perry scored way back in Super Bowl XX. That’s where one can find an outlet for your serious gambling addictions. So, in that spirit, let’s examine some of the more ridiculous bets out there. Some are odd, some are truly bizarre, and most require zero knowledge of football…or anything at all. If you are a degenerate gambler, then these are for you. (A quick note for gambling novices: If the money line is negative, such as -145, then you have to wager $145 to win $100. This works for any negative number, you wager that much to win $100. If the money line is a positive number, then you will wager $100 to win the money line. For example, if the money line is +145 then you wager $100 to win $145. For straight odds, its about the numbers. If the odds are 6-5, it means you will get $6 profit for every $5 wagered. If it states 20-1, it means you get $20 profit for every $1 wagered (i.e. bet $2 and get $42 back). This works for any numbers listed):

At least both heads and tails are the same odds. It wouldn’t make sense otherwise. So maybe there is some logic to this whole thing after all. Let’s move on to the people in the stands… 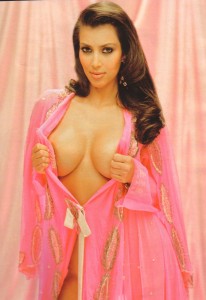 What color top (not on jacket if separate top and jacket are shown) will Kim Kardashian be wearing at the Super Bowl? (Bodog)

Will they show a replay of Tom Benson celebrating the missed field goal against Tampa Bay from the regular season? (Bodog)
Yes: +250
No: -325

And no, we have not forgot about the Manning clan, but we’ll have to come back to them. Kickoff is approaching, so how about a national anthem prop?

I like the over on that one, but that’s just me. So the National Anthem is over, which means we get talking some nonsense. Any bets on them? Sure!

Which sideline reporter will be on TV first after the opening kick off (Both side line reporters must be in attendance for wager to have action)? (Bodog)
Solomon Wilcots: -115
Steve Tasker: -115

How Many Times will CBS announcers specifically say “Hurricane Katrina” during the game (from kick off until final whistle)? (Bodog)
Over: 2½: -150
Under 2½: +120

And if you dig hard enough, I’m sure you can bet on the mentions of inspirational stories, like references to the Haitian backgrounds of Pierre Garçon and Jonathan Vilma or references to Saints “uniting” New Orleans. But enough on that, let’s hit halftime. And if you are wondering how many halftime songs there will be that aren’t currently CSI theme songs, then this is the type of bet for you: 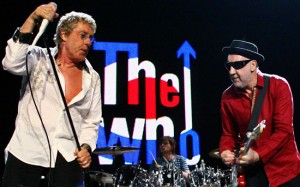 Halftime is over! And for those of you’ve that watched, you were treated to another act that was more relevant twenty years ago than today. That’s okay, I don’t listen to much music of today anyway. To this point you might notice I’ve largely skipped bets on the game. Those aren’t ridiculous enough on the whole. Except with the refs. You never know with them, and this has been a bad year overall for referees, so let’s throw this one in…

What will be the result of the first coaches challenge in the game (Wager is official once either coach challenges a play? (Bodog)
Play Overturned: -115
Play Stands: -115

Given some of the calls this year, I don’t know what’s a good bet here. So let’s hope there’s no major controversies and just fast forward to the end of the game. You know when the Gatorade showers start to commence. Which brings us to… 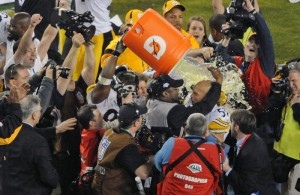 Just a note, “clear/water” has been the winner in three of the last four Super Bowls. Might be worth a shot, even if I’m personally hoping for blue. And one last Gatorade related bet…

What side of the ball with the Players that perform the Gatorade Shower be from (Players must be holding a part or piece of the bucket to be counted towards wager. If there are players from both sides of the ball involved in the actual dumping of Gatorade then Wagers are No Action)? (Bodog)
Offensive: +140
Defensive: -170

Damn those offensive players hogging all the Gatorade glory! Okay, now the game is over. Still a few bets to cover. First, let’s start with the commercials. They’ve all aired. So who’s the winner there?

Bud’s always a good bet, but not much money to be made on that one. What about the ratings?

These are supposed to be smaller markets, but Manning is a big name. Maybe the over is a worthwhile bet (like I really have any idea what’s a good bet here)? Whatever the correct answer is, let’s make sure not to forget about the Manning clan… 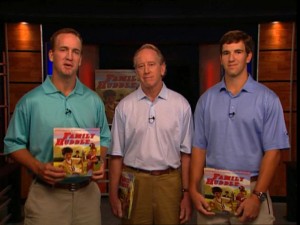 Which of course brings us to the end of the game…

Which brings us to the MVP. Not who will win. That’s not ridiculous enough. How about who he thanks? There’s a lot of bets on a Pierre winning MVP, either the Saints’ Thomas or the Colts’ Garçon. Apparently, if you knew this long ago, you would have gotten some pretty sweet odds. Even being named Pierre is reasonably rare, about 25,000 in the United States, or one out of every 125,000 people. But with around 1600 NFL players, the odds of any one guy name Pierre and being an NFL player is at something like 156 million to 1. So imagine two guys named Pierre scoring in a Super Bowl or winning MVP would be astronomical.

Well that wraps up our rundown of ridiculous Super Bowl bets. If you’ve gotten this far, here’s a table of actual spreads and over/unders of all the Super Bowls: