Sports > Fighting > A Guide to Understanding The Ultimate Warrior

A Guide to Understanding The Ultimate Warrior 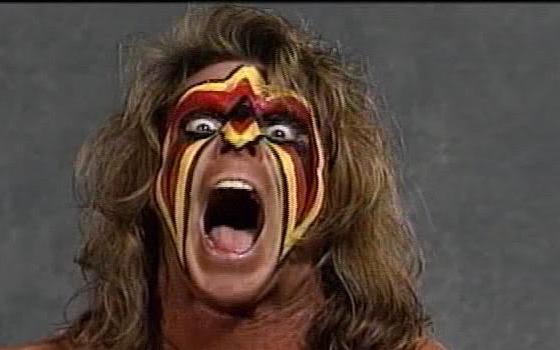 Editor’s Note : To honor the Ultimate Warrior upon the news of his recent passing, we are republishing this loving tribute from 2011.

Modern professional wrestling made its name with over-the-top and cartoony characters, but none achieved the same level of fame as Jim Hellwig, better known as The Ultimate Warrior. The man just oozed intensity, from the way he hauled ass to the ring like he had to defuse a bomb, to his ability to completely ice Triple H in under a minute. The character of Ultimate Warrior is remembered fondly even today, mostly because you could rarely ever understand what the hell he was talking about during any given promo.

Part of what makes or breaks a wrestler are mic skills. Ultimate Warrior presents an odd exception to this rule: despite not speaking in sentences Merriam-Webster could recognize, Ultimate Warrior was a crowd favorite for two primary reasons:

However, there was a method to the man’s madness. Only now, some twenty-odd years after his peak, top code breakers and linguists can reveal to you the the work of a lifetime: a practical guide to understanding The Ultimate Warrior. 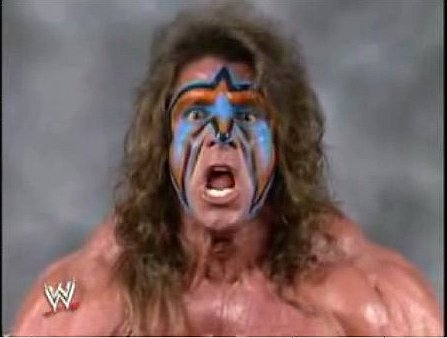 Let’s begin. A solid example of Warrior’s verbal dysentery is his legendary promo from Wrestlemania Six. The event saw Warrior defeat American icon and orange-skinned muscle man Hulk Hogan for the WWF Championship, an effort which was no doubt made possible by this:

This is scary to say the least, but what does it actually mean? Just follow this transcript for easy translation:

Right away Warrior wants to remind you that hey, he’s a warrior, and warriors are primal beasts, feeding off the land while slaying dragons and stuff. Of course, to a civilized man it sounds like he’s preparing to go all Johnny Rotten on the cameraman, but that misunderstanding is to be expected.

Warrior’s first attempts at verbal communication pose an important question: why can’t he talk with Hulk Hogan? It could be that it takes the man fifteen seconds to grumble eleven words of simple dialogue. It could be that Warrior thinks he’s some sort of warthog. Whatever the reason, there sure is something interesting going on behind him. 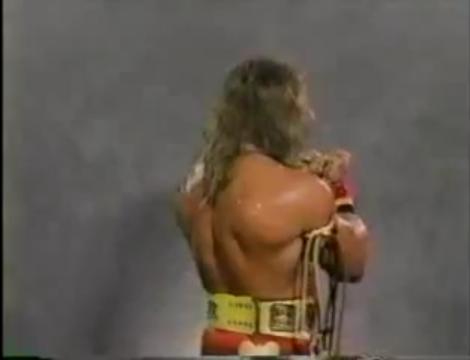 Given that Warrior has spent half a minute staring up at the ceiling, we can now assume that Hulk Hogan is either dead or dicking around in the catwalk. Either way, gods apparently wear tassels on their biceps and use large novelty belts to hold up their tights. Gotcha.

Judging by the man’s general shirtlessness and where his eyes seem to wander to, Ultimate Warrior lives for his nipples. And who wouldn’t? Those things could cut glass. 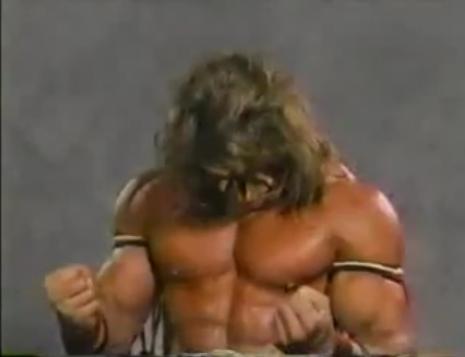 Here we reach our first glitch in the system: why do the NORMALS feel the need to protect Ultimate Warrior from finding comfort? Is his comfort self-destructive? Have doctors spent hours trying to talk Ultimate Warrior out of his auto-erotic asphyxiation habit, only to be put through a stack of flaming tables and elbow dropped from off the top rope?

What was once believed to be a dire need for antihistamines is actually a deep-rooted fondness for the “smell of combat.” Depending on which war he’s talking about, this smell can range from gun powder to genocide, so I’ll leave that up to interpretation.

It seems that Ultimate Warrior is made entirely or partially of poison. This may explain the brain damage that’s causing him to constantly spin in a circle as well as his lack of volume control.

1:45 – 2:10 — “But the anti-bodies of Hulkimania continue to refuse what the poison can do… THEY TURN IT AWAY, HULK HOGAN! They turn the poison away because they fear the dirty! They fear the evil!”

Or maybe they fear being poisoned.

Fun fact: the promo is now two-thirds complete and Warrior has mentioned poison, the NORMALS, evil, gods, and his own mythical power. Not once has he actually mentioned wrestling.

Here’s a fun game to play during any Ultimate Warrior promo or interview: take a shot of hard liquor every time he snorts. If you’re playing properly then right about now you’re remembering this joke fondly while awaiting a kidney transplant.

I’ve included the “s” in parenthesis because the tape gets a little shaky and I’m not quite sure if he meant “warrior” as plural or singular. But given that he’s once again staring at his nipples, he was probably referring to them. 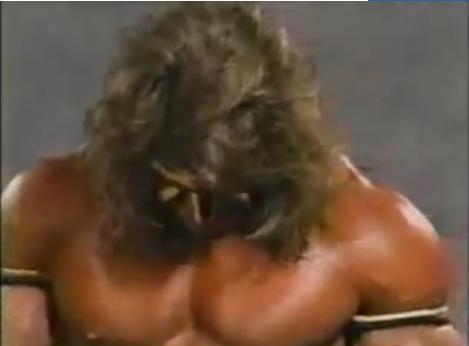 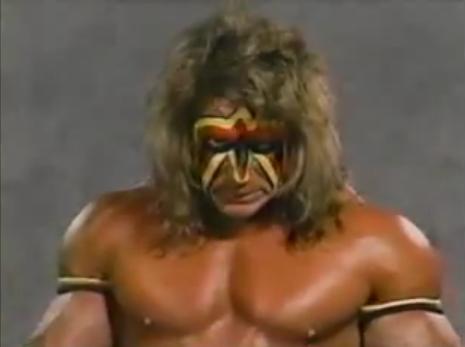 2:59 – 3:43 — “Look, Hulk Hogan, look into nothingness, look beyond your fears as you take that step, Hulk Hogan, and make the sacrifice so that the power of the ULTIAMTE WARRIAH can live (Jesus Christ the snorting).”

It’s not until we reach the last minute or so that we can safely deduce that the Ultimate Warrior, alleged god and fine connoisseur of chest oil, was intending to help Hulk Hogan through an existential crisis this entire time. Of course, this was recorded back in 1990. If anyone said that “make the sacrifice” line on television today they’d be an assumed terrorist leader and land themselves on a no-fly list faster than you can snap into a Slim Jim.