It’s the most beautiful peaceful natural thing I have ever seen. No wait, I think I meant creepy. Artist Daniel Edwards has created a naked sculpture of Angelina Jolie breastfeeding her newborn twins. It was inspired by last year’s W magazine cover, which was shot by Brad Pitt and captured Jolie breastfeeding her newborn twins. This isn’t the first kind of odd sculpture for Edwards, who has also created the sculpture of Britney Spears on all fours in the midst of childbirth, Oprah Winfrey with her dogs in a Pharaoh-like pose, and a naked Paris Hilton with her intestines exposed.

People in Oklahoma City will get the chance to check out this bronze statue Jolie up close in September when the city officially unveils the work titled as “Landmark for Breastfeeding.” Maybe the sculpture will inspire women all over the world to breastfeed? Here are a couple of shots below: 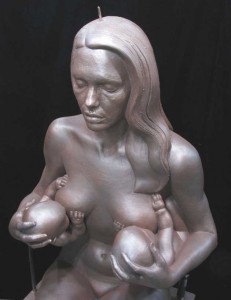 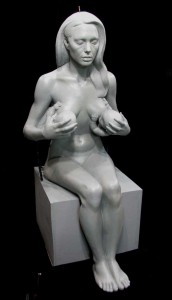