A Nightmare On Elm St. Review

This is an easy one to review because it’s a movie that didn’t need to be made.  What could have been a cool and different take on a true horror classic ends up as a weak, half-assed and unimaginative rehashing of the original.

Where to start with the problems?  First off, I was expecting a narrative starting with Freddy as the friendly gardener of a pre-school who starts getting a little too close to the kids.  Knowing it wasn’t going to be a straight prequel, more of pre-flambe Freddy would have been nice, instead of mostly the same little flashbacks we were given in the originals.

We know Jackie Earle Haley is a good actor, just watch Little Children. Why not let him shine without the makeup for a little while, show Freddy grappling with his poor choices, maybe slowly unraveling under the weight of his own mental issues and the anger and tension building between him and the parents of the kids?  Why not get into the story of the glove; how did he build it, what was it for, etc. Just a couple of things Freddy fans would’ve eaten up. We know Haley can be scary, just watch the Bad News Bears and fear for your lunch money. (Or I guess Watchmen, too.) Give the guy something more than 20 generic one-liners to work with.  Not in this Nightmare. 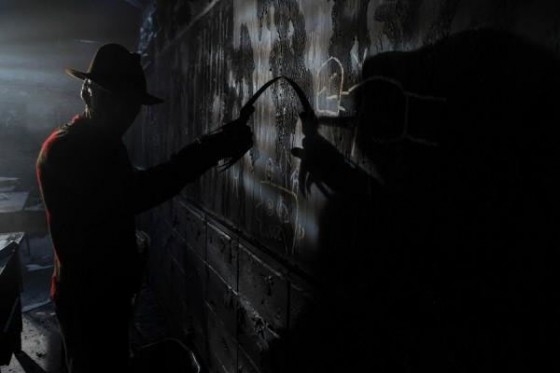 The rest of the cast is completely forgettable.  None of the characters or the actors who play them stand out or garner sympathy at any time.   All I was hoping for was some creative kills, which is half the fun in horror movies, but instead got an hour and a half of this: “Wah, we’re having nightmares,” Nancy draws, jump scare, Freddy makes sparks with his glove, a kid gets slashed.  A lot of the scenes are similar to those in its predecessor, like the bathtub, and the bodies flying around the bedroom, to name a couple.  Why tribute scenes though, when you won’t even give the original Freddy a cameo?

And what about this newfangled Freddy?  No more wisecracks means no more personality, which is what made Freddy a standout from every other horror villain to ever carve up a teenager.  I guess he’s a bit darker because of that, but why not show how sick the guy really was?  Why not show the photos that prove what a monster he was in life?  Not until the final fight do we even choose a side as to who the bad guys here really are, which emotionally leaves us hanging.  Is it the pitchfork and torch wielding parents?  Is it the kids who were lying about Freddy?  Or is it actually Freddy?  The answer is obvious and insulting and changes nothing. 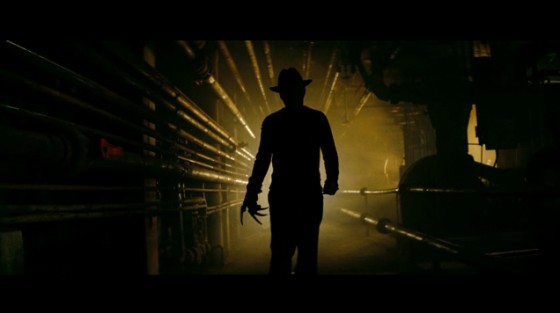 If they had laid the blame for Krueger’s revenge on someone else, maybe you have a nice twist, but it remains old (Freddy) hat.  Another thing about Freddy that bugged me was the makeup.  Yes, Freddy was burned alive, but in making Haley’s face look like an actual burn victim, all I felt was pity for the guy because it looked too real and horrific.  Not scary, but horrible.  The original  makeup was a stylized, horror version of a burn victim, which made it work.  The new Freddy looks like a real burn victim dressed as Freddy for Halloween, which isn’t scary, but actually kind of sad.  Go ahead and Google “Not everyone who gets hit by a drunk driver dies” and take a look at the PSA poster and every time you see the new Freddy, you’ll just think of this.  I’d post it in this review, but it’s more graphic than anything in this movie.

A lot more could’ve been done with the nightmares.  In the original movies, Freddy would craft awesome and crazy dreamscapes, situations and ways of morphing himself to really prey on the fears, addictions and personalities of his victims, which made him even scarier and seemingly more powerful.  In this version, it’s mostly just Freddy in his boiler room with his glove.

With all that can be done with CGI these days, this film is a pretty analog affair.  The two effects I will give credit for are the hallway of blood, which was a nice mix of real and CGI and Nancy falling through it and coming out clean.  These effects were very cool and what the movie needed more of.   If Freddy is the dream master, let’s see where his twisted mind can take these kids.  Freddy should not be boring and predictable and deserves more than having his audience trying to stay awake like the faux-teens of Springwood.  Hardcore fans of the original Nightmare On Elm St. series are best to skip this for fear of burning disappointment. 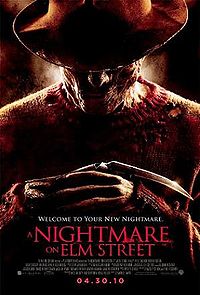