Media > Movies > A Review of Harry Potter and the Two Towers

A Review of Harry Potter and the Two Towers 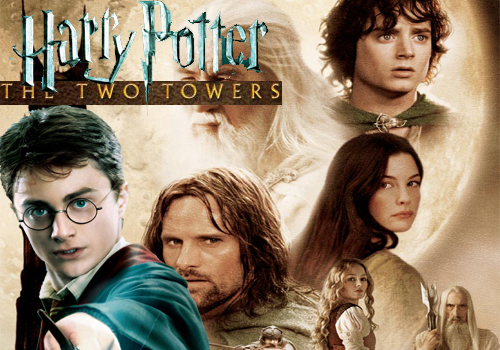 So… Harry Potter and the, what now? Oh, so you haven’t seen it then? Or, evidently, not read the book either? Well, then you, sir or madam, are in for a real treat! It seems Ms. Rowling had to peruse a few bits of classic literature before she could put pen to page for her final installment, ‘The Deathly Hallows’. I kinda figured plagiarism was, ya know, illegal?

Look, it’s not that I didn’t like the penultimate installment in the film franchise, it’s just that it really didn’t seem necessary to break it into two parts, especially when part one is roughly 40% excitement, 40% walking, and 20% absolute silence! That’s right, there is so much ‘not talking’ happening in this movie I thought the sound had cut out on the projector! Even the audience was eerily quite. And not the kind of quiet you can hear during riveting parts of action packed or narrative-heavy flicks. No, they were dead silent out of boredom! Again, let me reiterate that in no way was this movie bad. It’s just that from the very moment Harry, Ron, and Hermione struck out on their own to search for the Horcruxes, it felt like Frodo and Sam all over again.

"Man, that wizard chick down there is smokin' hot!"

The ‘Two Towers’, for what it was, was a very powerful story focusing on friendship, dealing with an object of pure evil and how best to travel with it, and testing one’s faith in duty. And ya know what? So was ‘Deathly Hallows’. To a frikkin T! About forty minutes in, the trio discover that (SPOILERS) Umbridge has the Horcrux locket and is wearing it as a necklace. So, Harry, Ron, and Hermione disguise themselves as Ministry employees through the use (lots of this happening, too) of Polly-Juice potion. This particular act reminded me completely of how Frodo kept turning himself invisible to avoid situations. Happened a lot, if you remember. Anyway, they get the Horcrux and this thing becomes this all encompassing burden just chock-full of evil… exactly like the One Ring. Can’t imagine where Rowling got that from. Oh, END SPOILERS. 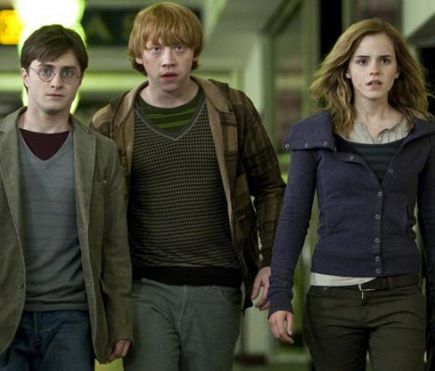 Yes, so these Horcruxes become the focal point of the trio’s quest. This should come as no surprise to anyone who’s read the books. And if you have, then it should also come as no surprise that for my money, ‘Deathly Hallows’ was one of the most boring books of the saga as well. Long periods of brooding, competing adolescent hormones raging out of control, allegories on friendship and relationships that span pages… isn’t this shit supposed to be about Wizards, Magic Wands, and said Wizards using said Magic Wands to fight! What’s the deal? Oh sure, there’s a few decent battle scenes. Many of which occur while everyone is RUNNING! Characters are met, barely established, and then gone while we, the viewers, bare witness to another fifteen minute diatribe from Hermione or Harry on the why’s and why not’s of everything. It’s just not a lot of fun. I wanted my damn Bill Nighy in this thing for more than ten minutes! Out of nearly three hours, that’s a drop in the bucket! 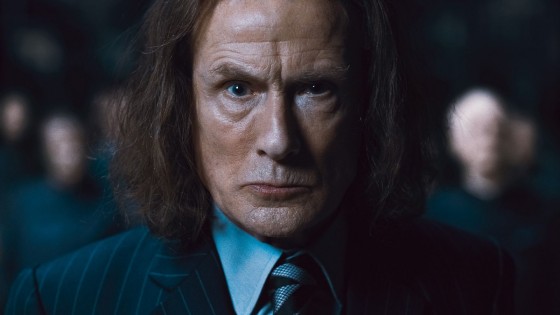 Kicking ass without even doing anything.

And then we come to the thievery of Arthurian Legend. Again, all of this particular nonsense was indeed in the book, but that doesn’t make it any less, “Hey, I’ve seen this somewhere before, only better”. The scene of which I speak is of course the one when, out of the blue, Harry is… oh, right (ahem) SPOILERS! Okay, Harry is just outside one of the many scenes featuring a tent (lots of tent scenes- we get it, already) when suddenly he gets this sudden urge (aided by someone’s doe Patronus) to explore a nearby iced pond. He does and, low and behold, there’s the Sword of Gryffindor! Hey, wait a cotton-picken’ second! This scene is almost directly yanked directly from the legend of ‘The Sword in the Stone (ya know, Excalibur)!’ Here, go check it out for yourself: Sword info. 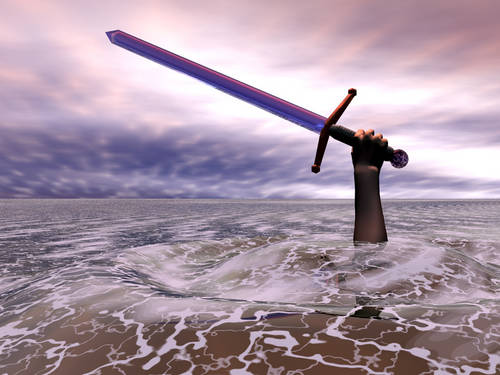 "There's a whole shitload of these things down here!"

So let me summarize this little back-and-forth. Visually, the film was absolutely stunning. Conceptually, it felt a lot more human and real due in large part to the fact that it never once takes place in Hogwarts -for a change. Acting. Well, somehow everyone looked and acted as though something smelled really bad on the set the entire time. And as for the story, well, like I said, it just felt dull, boring… like there was really no need to break this up into two parts at all. Sure I’m looking forward to part 2 in July where, if I remember correctly, more stuff happens. But, I have to admit, I might not choose to pay to do so.