A Salute to Lloyd Kaufman 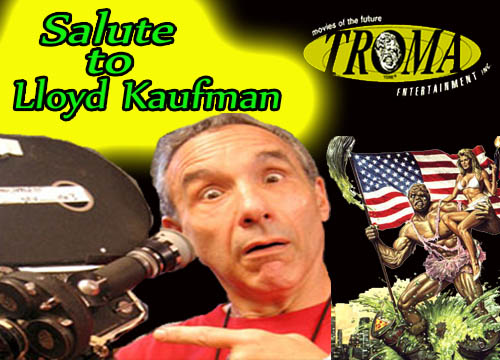 Lloyd Kaufman, you are a genius! You’ve come up with all kinds of good movie ideas! More than most people do! You created the most important and enduring movie icons off all time. ALL time, Lloyd! I don’t care what generation you look back on, The Toxic Avenger is the only film character that ever really mattered, and you’re the guy who created him! But you didn’t stop there. No, you didn’t even start there. Where did it all begin? Let’s check out IMDB and figure this out before it consumes us with self-doubt and ridicule. Why would it fill us with self-doubt and ridicule? I don’t know. It just would. Let’s see, where did your film career begin?

It looks like you were doing nothing with your life, NOTHING! And then 1969 rolled around and you made the first movie that IMDB has listed for you. Was it really your first movie? Or did you make others before  that which  IMDB hasn’t mentioned? Only God can answer that question, and he’s pleading the 5th. But whatever, that movie, Lloyd, was The Girl Who Returned. Do you remember making that movie? Do you? It’s been awhile, I know, but think back…

Whatever. And then between 1969 and 1984 you made a bunch of other movies. And Rocky! Okay, you didn’t make Rocky. Sylvester Stallone made Rocky but you had a small role in it. Yes you did, Lloyd! You were a bum in that movie. That was cool, you being in Rocky. I wish I could have been in Rocky, but Sylvester Stallone doesn’t care anything about me. I could die tomorrow and do you think Sylvester Stallone would even have 30 seconds of silence to honor my memory? No. He wouldn’t. That’s because he’s a punk. Sylvester Stallone is a punk! So to Sylvester Stallone I say, “Screw you! Rocky IV was stupid anyway and doesn’t even make sense anymore because the Cold War is over so it wouldn’t it be a big deal for Rocky to go fight in Russia, which shows how much you know, which is pretty much nothing. Idiot.”

1984- that’s when you really achieved infamy, Lloyd. In 1984, you made the most famous movie ever to be made ever in time. You made The Toxic Avenger. The Toxic Avenger tells the story of Melvin, (loosely inspired by Sylvester Stallone who is stupid) a weak little man who is pitiful and who is bullied by some bullies and then he ends up in a vat of toxic waste. But the story doesn’t end there. No, in a lot of ways, that is where the story begins. So, this Melvin kid, he falls into a vat of toxic waste and that mutates him and deforms him and transforms into a mighty, mighty superhero- The Toxic Avenger! Toxic super heroes are the best kind of super heroes, and of the toxic sub-genre of superheroes, Toxie is the best, hands down. People say “hands down” to denote that a fact is universally agreed upon. I don’t know why that is, though.

The story of The Toxic Avenger was too good a concept to confine it to just one movie, though, wasn’t it? You knew this right from the start, Lloyd. That’s why in 1989 you made parts II and III. And they were good! And then you brought Toxie into the new century in 2000 with part IV! But not even that was enough! There has also been a cartoon show for little kids. I’m not kidding! A Toxic Avenger cartoon show called Toxic Crusaders was spat forth into this world through the birth canal of your imagination, Lloyd.

But even four movies and a cartoon show isn’t enough to tell the full story The Toxic Avenger. So you wrote a novel! And it’s 304 pages long! That’s a lot of words. I bet Sylvester Stallone can’t even pronounce half of them. So, yeah, a novel, but not only just that but there’s a stage musical and a part 5 movie in the works! A Toxic Avenger Musical. Who ever would have thought it? 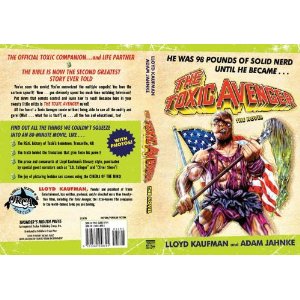 Your movie making, like your baby making, isn’t limited to just The Toxic Avenger, though Mr. Kaufman. Which brings up a good point. You should make more babies. If you had some babies, I bet they would be super babies with awesome super powers, like they could probably tunnel under ground at super human speed, faster than any machine could. Then somebody could come up with a race between your Super Tunneling Babies and a steam drill to see who could dig a tunnel through the mountain for the railroad line that’s being laid down the fastest, the steam drill, or the Lloyd Kaufman Super Babies? But then the steam drill would blow up and your babies would die from exhaustion. But what a great show that would be for the people coming out to see it!

But like I was saying, you’ve come up a bunch of other cool characters besides just Toxie. You also made those Class of Nuke ’em High Movies,  and in 1996 you made the movie William Shakespeare would have made if he could have- Tromeo and Juliet.

Terror Firmer came out  in 1999, and Sgt. Kabukiman, N.Y.P.D. in 1990 and they were good too. But then Lloyd, in 2006 you made the most outrageous and over the top movie anybody anywhere has ever made, Poultrygeist: Night of the Chicken Dead. Here’s what  Owen Gleiberman, Entertainment Weekly had to say about it: Poultrygeist is as savage as Dawn of the Dead, as slapstick nutzoid as Evil Dead 2, as gag-on-your-popcorn gross as Pink Flamingos, and as dementedly foulmouthed literate as a Kevin Smith raunchfest. It’s genuine sick fun, and there isn’t a boring moment in it.

But when you are not making movies, Lloyd, what are you doing? You are encouraging others to make movies. You are encouraging them to make movies independently, outside of the major movie Hollywood corporate system. You’ve written books on the subject. Yes you have! You wrote Direct Your Own Damn Movie! and Produce Your Own Damn Movie! Both of which offer sound, real, logical, illogical, and really good advice to novice film makers who just want to express themselves. That’s all they want to do- express themselves! Be heard! Get their creative inspirations out there to a world looking to simply be entertained. You are their champion, Lloyd. Good on you for that!

You’ve done a lot to help people, too. You have an eagle eye, an almost preternatural talent for discovering new talent and are willing to help them spread their wings and fly. You have given more than one up and coming film maker a home for distribution of their work. To name just a few movies you distributed belonging to up and coming film makers, there has been Redneck Zombies, Buttcrack, Zombiegeddan, and Cannibal the Musical from the pre-South Park Trey Parker & Matt Stone.

But, you know, Lloyd, it is your work with beautiful, big breasted women that will ensure your place in history. You know who I’m talking about- THE WORLD FAMOUS TROMETTES! In a recent Gallup Poll, it was revealed and 72% of fathers with daughters 13 and younger hope that their offspring will grow up to be Tromettes. There is a strong push for academic academies to be set up for these young girls to receive their Tromatic training starting as early as age seven that they may enter into this highly lucrative and exciting career just as soon as their breasts develop . This is a true fact and it can not be argued with.


You have contributed a lot to society, Lloyd. And for your contributions, that should be your face on Mt. Rushmore. By now, we are all pretty sick of looking at George Washington up there. What did George Washington ever do that was so great anyway? “Oh look at me I’m George Washington and I think I’m sooo great! I am the father of our country and I chopped down a cherry tree, blah blah blah.” Whatever, George Washington. It’s time to come down off your high horse and quit acting so high and mighty. So you crossed The Delaware. Big flipping deal. Anybody can paddle a canoe, George Washington. That doesn’t make you special. Why don’t you just shut about it? And how much longer do we have to look at your wooden teeth wearing face on the dollar bill? I’m almost sick of living in America knowing that every time I buy a cup of coffee at Starbucks I have to look at you when I pay the cashier. It’s time for a new dollar, one that doesn’t have anything to do with dumb old George Washington. I propose we put your face on a dollar bill, Lloyd. No! Not your face. Keeping in the spirit of Troma, they should put your butt on the dollar bill. Yeah! That would be awesome. Everybody write your congressmen and your senators and push them to create the Lloyd Kaufman Butt Dollar. It’s what America needs in this time of change!

The Lloyd Kaufman Butt Dollar. Not legal tender... yet. 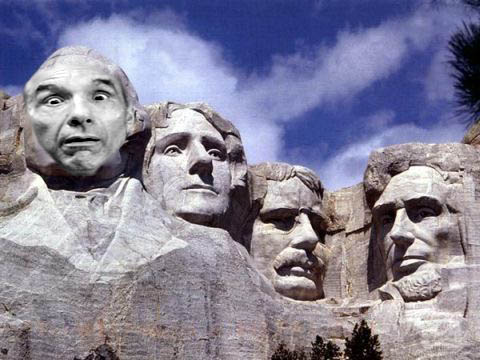