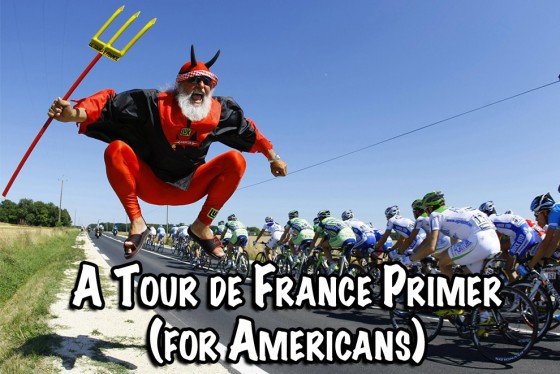 The 2009 Tour de France is underway, with the opening stage taking place on July 4th. While I don’t expect many Americans to tune in on Independence Day, you do have 3 weeks left to enjoy this most epic of races. Yesterday we brought you a Tour de France Preview, but today we step back a bit, and provide a primer for Americans who are looking to experience the sport, possibly for the first time. With Lance Armstrong returning from retirement, coverage of this event on ESPN and other national sports outlets will most certainly be high, so we’re here to help get you oriented. 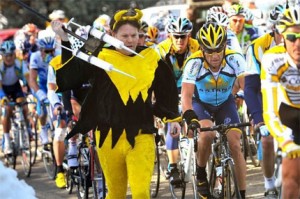 Lets get this out of the way first. Yes, there is a doping problem in Professional Cycling. In recent years, numerous riders have tested positive, and have been expelled from the race and the sport. The good news is that most of the names associated with doping scandals will not be racing in this year’s Tour. Cycling has a tarnished reputation for doping, however in my opinion the sport should be applauded for catching the cheats, and getting rid of them. Riders are tested numerous times during the race, and all throughout the season, much more extensively than you will see in any other sport. In the 2008 Tour, 180 riders entered, and only 8 were caught up in doping scandal. That is less than 4.5%, and the biggest names were caught using MIRCERA, a new form of EPO which had just recently been developed. The testing kept up with the cheaters, and even the newest form was detected. Cycling has never ignored their doping problem, and they have always been at the forefront of fighting it. I wish the same could be said for other sports that we enjoy.

Cycling certainly has its own language. For the most part, we’ll try to avoid using the French terminology, but below are some terms that you should be aware of as you read this primer, and watch the coverage.
Peloton – The main group of riders.
Break, Breakaway – a group of riders that take off ahead of the Peleton.
Chase – single rider or group that tries to catch up to the leader or breakaway group.
Domestique – A designated rider who sacrifices personal performance to help the team.
Drafting – Riding closely behind another rider, saving energy.
GC, General Classification – Tracks the overall leader based on time.
Time Trial – Simply a race against the clock. Each rider rides individually.
Team Time Trial – A team race against the clock, ultimate test of teamwork.
Prologue – A short time trial that opens the Tour.
Flat stages – Minimal climbs, typically feature a bunched sprint finish.
Mountain stages – Big climbs, dominated by the GC riders. 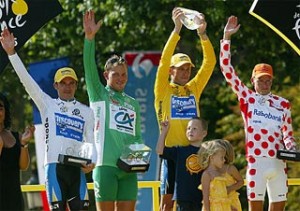 There are several competitions going on during the three week Tour de France. The most prestigious of which is certainly the general classification. In addition, earning a stage win in the Tour de France is certainly a prestigious event in itself. There is also a team competition which awards the team with the lowest overall time. At the conclusion of each stage there is a podium presentation (with babes) for the stage winner, and the winner of each jersey. Below is an overview of the primary jerseys.

The United States has seven riders entered into the 96th Tour de France, which isn’t a large percentage of the field, however they will have a major impact. Of the seven, only one is riding in his first tour.

This is the one name that hopefully needs no introduction. This is Lance’s 12th time entering the Tour de France, and he has won a record 7 times (consecutively too). Armstrong retired after the 2005 race, but now he is back and is looking to regain his title. Lance is primarily racing to raise awareness for his cancer fighting charity, Livestrong, but he is a definite contender for the general classification. Lance excels in time trials and in the mountains.

Levi is easily the second biggest name in American cycling at the moment. He has won his hometown Tour of California for three years straight and this will be his 7th time riding in the Tour de France. His highest finish came in 2007, when he finished 3rd behind his teammate Alberto Contador. Like Lance, Levi excels in time trials and in the mountains. It is anticipated that Levi will ride for teammates Armstrong and Contador again this season.

Christian had a stellar 2008 season, finishing 4th overall in the Tour de France, and leading the Giro d’Italia for several days. Unfortunately he suffered a major crash at this year’s Italian race, and is now recovering from injury. He is the leader of the American team, Garmin-Slipstream. He is an underdog for the overall title, and also excels in time trials and the mountains.

Tyler is the new kid on the block, riding in his first Tour de France. Unlike the other riders profiled here, Farrar is a sprinter, and will get demolished in the mountains. His time will come in the flat stages, towards the beginning of the Tour. It is very possible that he won’t even finish the entire 21 stage event, but he is looking to make an impact among the fast men. He finished 2nd in two stages of this year’s Giro, and defeated the world’s fastest man, Mark Cavendish, at a race in Italy earlier this year.

George is a favorite of American cycling fans, due to his longevity, loyalty, and determination. He is riding in his 14th Tour de France, and rode with Lance Armstrong in all seven victories. George’s ability to cut the wind in front of Lance on the slopes of the low mountains was instrumental in Armstrong’s success. He is the epitome of a team rider. He has had individual success in time trials and stages in the past, but now he serves primarily as a lead out man for his team’s sprinter, Mark Cavendish.

David is a time trial specialist, and has won stages in each of the grand tours (France, Italy, Spain). He finished 2nd overall in this year’s Tour of California. This will be his 5th entry into the Tour de France, and his most successful ride came in 2005 when he held the Yellow Jersey for several days after winning the prologue time trial.

Danny is competing in his 2nd Tour de France, after making an impressive debut last year. He finished 3rd on the 15th stage, and recorded some good times in the time trials. He will be a team rider for Christian Vande Velde, but may take a chance in a breakaway when the Tour enters the lower mountains.

Many people don’t realize what a team sport cycling really is. 20 teams will participate in this year’s Tour de France, each containing 9 members. Each team certainly has their own goals. While some will be riding for one man in the General Classification, others will be looking for stage victories in the sprints, or just to get some television time in France. A typical team is well rounded, with climbers, sprinters, and domestiques. As you watch the Tour, you will notice the teams riding in formation, with the leaders of the team drafting behind their teammates, conserving energy until the final climb or sprint. Lance Armstrong is certainly one of the strongest riders ever, but he also benefited greatly from having one of the strongest teams around him, built to help him succeed. Below we will feature the three teams that will be of the most interest to American spectators.

Astana is actually based out of Kazakstan, but features the two strongest American riders, Lance Armstrong, and Levi Leipheimer. How did they get on Astana? Johan Bruyneel holds the answer. As the most successful team director in cycling, Bruyneel is the tactician that coached Lance to his

7 victories, and Lance and Levi both followed Johan to Astana. So while it was great to see Armstrong riding in the colors of U.S. Postal for so many years, this year we will watch him in the colors of Borat’s homeland. Astana is a loaded team, with Lance and Alberto Contador of Spain serving as co-leaders. Leipheimer, Kloden, Zubeldia, and Popovych are other big names riding on the team which only includes one Kazak rider.

This team has an extensive history in the sport which may not be apparent to all who tune in. They were originally formed as Team Telekom, then became T-Mobile. Following doping scandals the team then moved to the United Stated under the name Team Highroad, and is now named for sponsors, Columbia-HTC. The team only contains one American, George Hincapie, who most

likely will be riding for his teammates. They will however most likely make a lot of noise early in the Tour with team leader Kim Kirchen, and sprinter Mark Cavendish. Between the two of them, they took 5 stages in last year’s tour, and grabbed early headlines in France. Cavendish is easily one of the most exciting young riders in the sport, and oozes confidence.

While not as accomplished or deep as Astana or Columbia, if you are looking for an underdog American team, then Garmin-Slipstream is your team. The team was established in the United States in 2007, and will feature 4 American riders in this year’s Tour. Garmin-Slipstream is noted for having extensive internal doping controls. This new team on the

block had an excellent premier at the 2008 Tour, competing early in the team competition, and having the 4th overall rider Christian Vande Velde. They have already begun strong in this year’s race with Bradley Wiggins placing 3rd in the prologue. Look for Tyler Farrar to go for stage wins early in the sprints, and for Vande Velde to emerge in the mountains.

So now that you know who the major players are for U.S. fans, how do you watch this spectacle? Well first of all, Versus has all of the coverage for the Tour de France again, and they do an excellent job. They have a four man team that tackles the action in groups of two. Each day coverage starts at around 8:30 AM ET with a pre-race set show (usually from the finish line). They then proceed to cover that day’s stage in semi live fashion. The finish is live, but normally the beginning of the stage is summarized with video clips. The morning coverage is handled by Phil Ligget and Paul Sherwin, and they tend to focus primarily on the race. I normally Tivo this coverage, and watch it in the evenings. Ligget and Sherwin are excellent, and honestly I enjoy their accents.

However if you are a cycling novice, you may prefer the evening coverage. Each evening at 8 PM ET, Bob Roll and Craig Hummer present prime-time expanded coverage. Expanded means that they cover more than just the race. They profile riders, teams, history, and locations. While they don’t focus as much one the race as the morning coverage, its a very long race, so missing a few minutes here and there isn’t going to hurt you. They also focus more on educating the viewers about the sport, the equipment, the tactics, etc.

Both shows are presented in glorious high definition, and we mean glorious. One of my favorite parts of watching cycling is the HD helicopter filmed panoramas of the French countryside and architecture. The images below are still shots, but they give you an indication of the beauty of this sport. 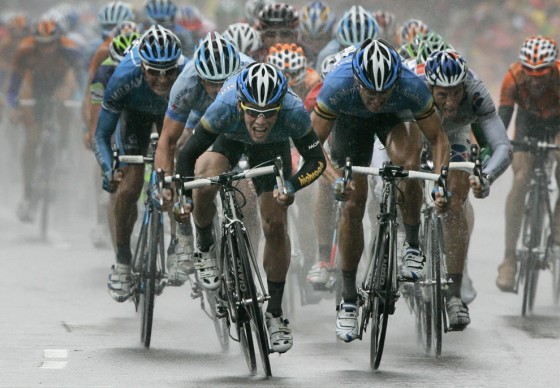 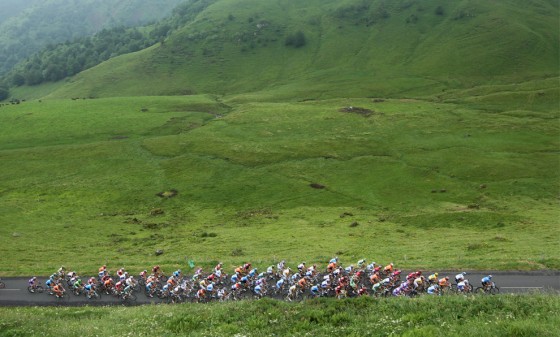 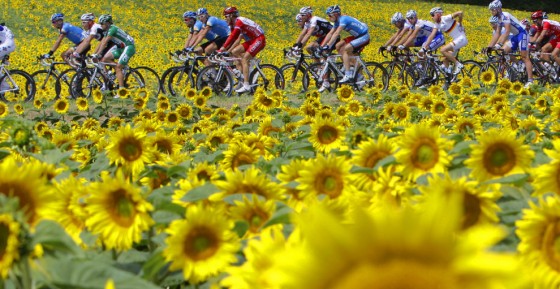 Hopefully now you have a better understanding of this sport, and will tune in to watch. If you need further convincing, consider this. The French suck at the Tour de France. I haven’t done the math yet, but there will most likely be more French riders in this event than any other nationality, yet the Frenchies will make only a minor impact on their premier event. So if you enjoy watching the French struggle for some semblance of national pride, this is the event for you.