A Tribute to ‘Captain’ Lou Albano

Sadly, according to Yahoo and the Associated Press, this shit went down:

“NEW YORK – “Captain” Lou Albano, who became one of the most recognized professional wrestlers of the 1980s after appearing in Cyndi Lauper’s “Girls Just Want to Have Fun” music video, died Wednesday. He was 76.
Albano, whose real name was Louis Vincent Albano, died in Westchester County in suburban New York, said Dawn Marie, founder of Wrestlers Rescue, an organization that helps raise money for the health care of retired wrestlers. He died of natural causes, Marie said. 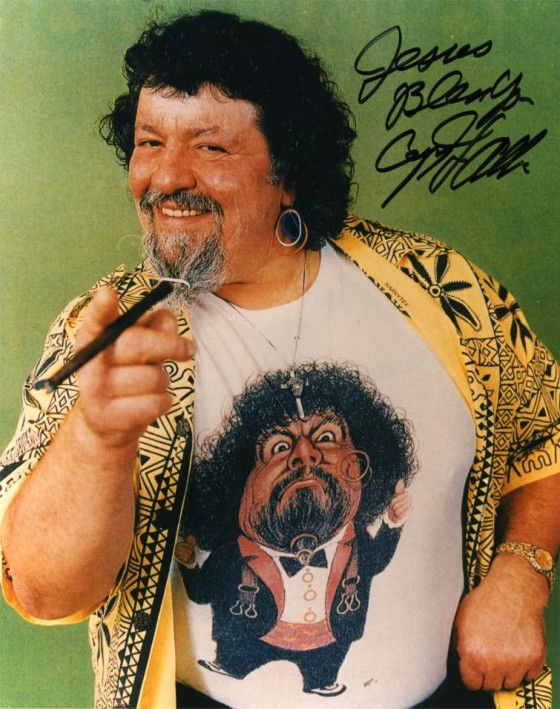 World Wrestling Entertainment called him one of the company’s “most popular and charismatic legends.”
With his trademark Hawaiian shirts, wiry goatee and rubber bands hung like piercings from his cheek, Albano was an outsize personality who, in a career spanning nearly five decades, was known as much for his showmanship as for his talent in the ring.
His fame skyrocketed when he appeared in Lauper’s landmark 1983 music video, playing a scruffy, overbearing father in a white tank top who gets shoved against a wall by the singer.
Partly because of the success of Albano’s partnership with Lauper, the entity then known as the World Wrestling Federation forged ties with the music industry. That helped bring it to a wider national audience in the mid-1980s, known as the “Rock n’ Wrestling” era.
“When the Captain hit the screen with the video, it gave us a whole new audience,” said “Irish” Davey O’Hannon, a professional wrestler who knew Albano since the 1970s. “When that came out, let me tell you, it just rocketed.”
It was a time when wrestlers such as Albano, Hulk Hogan, “Rowdy” Roddy Piper and Andre the Giant were so popular that they could headline a television cartoon series and appear in movies.
Albano later had a role in the music video for Lauper’s 1984 song “Time After Time,” and he appeared in episodes of the TV series “Miami Vice” and in the 1986 movie “Body Slam.” He played Mario in “The Super Mario Bros. Super Show,” a live-action animated show, from 1989 to 1991.
His career in the ring began in 1953 in Canada, and he went on to form the “The Sicilians” tag team with Tony Altimore. They were known for wearing fedoras and talking about the Mafia in interviews, according to the book “WWE Legends” by Brian Solomon.
Albano also coached popular tag teams such as The Wild Samoans, The Executioners and The Moondogs. He retired from the WWE in 1996.
Albano was born on July 29, 1933, in Rome. After moving to the U.S., the family settled in Mount Vernon, N.Y. Survivors include his wife, Geri, four children and 14 grandchildren.”

Everyone who was ever a fan of the illustrious WWF (World Wrestling Federation before the World Wildlife Federation bitch slapped it to the WWE) obviously remembers the amazing and uber-theatric “Captain” Lou Albano. He was fun to watch, awesome in the ring, and a great goofy talent. Since the whole story is up there, there’s really no reason to go into detail, but I will toss a few kick-ass vids your way. The big lug will be missed.

“Captain” Lou in the ring

And, of course, with Cindy Lauper