Media > Movies > A Tribute to Chunk From ‘Goonies’

A Tribute to Chunk From ‘Goonies’ 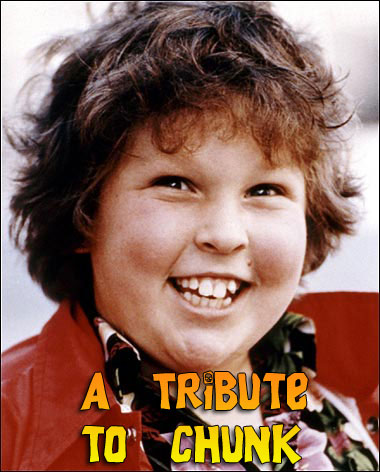 In honor of the Goonies’ 25th anniversary…

While everyone’s favorite character from 1985’s The Goonies is the deformed Sloth Fratelli (see Gunaxin’s tribute here), coming in an easy second is Lawrence “Chunk” Cohen, played brilliantly by Jeff Cohen. Chunk is a stereotypical clumsy, food-loving fattie who provides most of the slapstick comedy throughout the film. While in captivity, he befriends Sloth, escapes, and saves the Goonies from the Fratellis (the beautiful Anne Ramsey, Joe Pantoliano and Robert Davi). Chunk, like Jeff, is Jewish.

Now, before we proceed, we must watch this:

And let’s also look at this:

Okay, now onto the tribute.

Cohen claimed in The Goonies DVD commentary track that every role he played as a child had him wearing either a Hawaiian shirt or a pair of plaid pants, and director Richard Donner had the brilliant idea of putting him in both for The Goonies. Before The Goonies started filming, Cohen contracted chicken pox. Afraid that they would re-cast the role, he told no one of his illness and showed up to work anyway. According to the commentary track on The Goonies DVD, you can see the chicken pox on Cohen’s chest during the famous “Truffle Shuffle” sequence.

Here is what Chunk looks like as an adult: 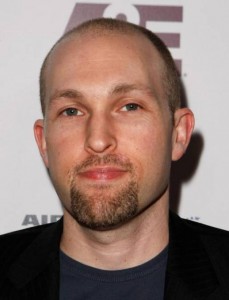 WTF? That looks NOTHING like Chunk. Who would’ve thought that it was Mikey (Sean Astin) and not Chunk who would grow up to play the fat Hobbit?

Cohen is now an attorney in Los Angeles with his own entertainment law practice. He was class president at UC Berkeley, running with “Chunk For President” as his slogan. He did the Truffle Shuffle on the sidelines at football games.

Visit TheGoonies.org for a video of Jeff talking about when Michael Jackson visited the set of the movie.

Here is Jeff at a Goonies 20th anniversary event in 2005 in Astoria, Oregon.

Here is the dialogue from the scene that should have earned Jeff an Oscar nomination for Best Supporting Actor. He was overlooked.

[the Fratellis are interrogating Chunk]
Francis Fratelli: Tell us everything! Everything!
Chunk: Everything. OK! I’ll talk! In third grade, I cheated on my history exam. In fourth grade, I stole my uncle Max’s toupee and I glued it on my face when I was Moses in my Hebrew School play. In fifth grade, I knocked my sister Edie down the stairs and I blamed it on the dog… When my mom sent me to the summer camp for fat kids and then they served lunch I got nuts and I pigged out and they kicked me out… But the worst thing I ever done – I mixed a pot of fake puke at home and then I went to this movie theater, hid the puke in my jacket, climbed up to the balcony and then, t-t-then, I made a noise like this: hua-hua-hua-huaaaaaaa – and then I dumped it over the side, all over the people in the audience. And then, this was horrible, all the people started getting sick and throwing up all over each other. I never felt so bad in my entire life.
Jake Fratelli: I’m beginning to like this kid, Ma!

Now, let’s go shopping for Chunk stuff. Baby Ruths can be purchased at any convenience store. 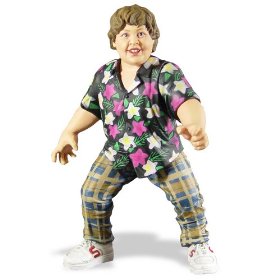 Or, buy Chunk and Sloth together:

Set Of 2 With Chunk & Sloth 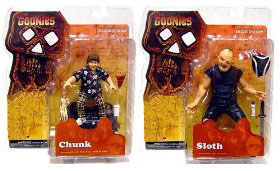 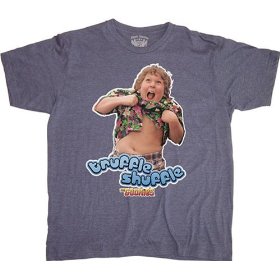 And for the women: 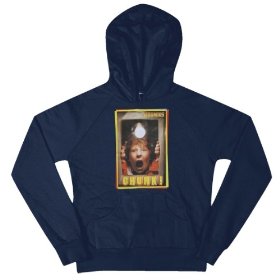 Actually, there’s a lot more. Check out Chunk on Amazon.

Now, we close off the tribute with the best scenes involving Chunk: