A Tribute to Ed McMahon 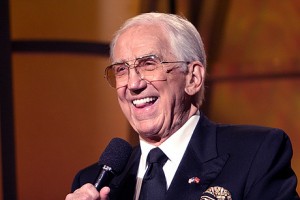 Various media outlets are reporting this morning that Ed McMahon has died at Ronald Regan UCLA Medical Center, at the age of 86. He is best known as Johnny Carson’s sidekick on “The Tonight Show” and his infamous catchphrase, “Heeeeeeeeeeere’s Johnny!” McMahon also hosted “Star Search” and “TV Bloopers And Practical Jokes” with Dick Clark. Many younger American know McMahon as the Publishers Clearing House guy, however he never actually represented Publishers Clearing House, rather American Family Publishers. He also served as co-host for the Jerry Lewis Labor Day Telethon. He was a colonel in the United States Marines and a fighter pilot and served during the late 1940s and 1950s. So now we look back at some fond memories of Ed McMahon.

Ed McMahon peddles anything for a buck: