A Tribute to Freddy Krueger 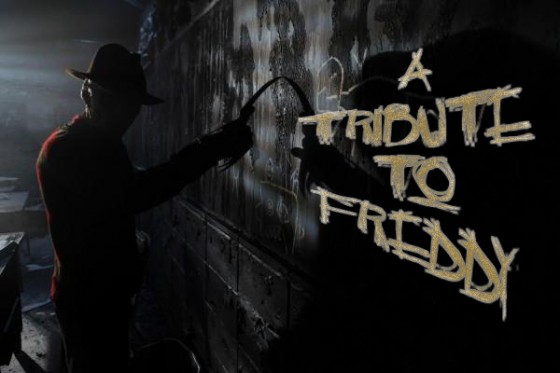 Whatever you do, don’t fall asleep…

That’s right, kids, April 30th marks date for the re-imagining of a cultural horror-movie icon: Freddy Krueger. Not since his original inception in 1984 has there been a change in casting. In fact, Robert Englund has masterfully portrayed the psychopathic burn-scarred slasher in each and every one of the original films, including the most recent (up until now) installment, Freddy Vs. Jason. This is unusual because even the titular king of all things slasher and over-the-top violence, Jason Voorhees, has been played by as many as five different actors. So now we get a new melted face haunting the children’s dreams in Elm Street, and he is Jackie Earl Haley, most recently known for his amazing portrayal of Rorschach in The Watchmen. If you haven’t seen the comparison stills yet of the two Freddy visages, here ya go, the Rue Morgue cover (and if you’re not reading Rue Morgue, well, then I’m not sure we can be friends anymore): 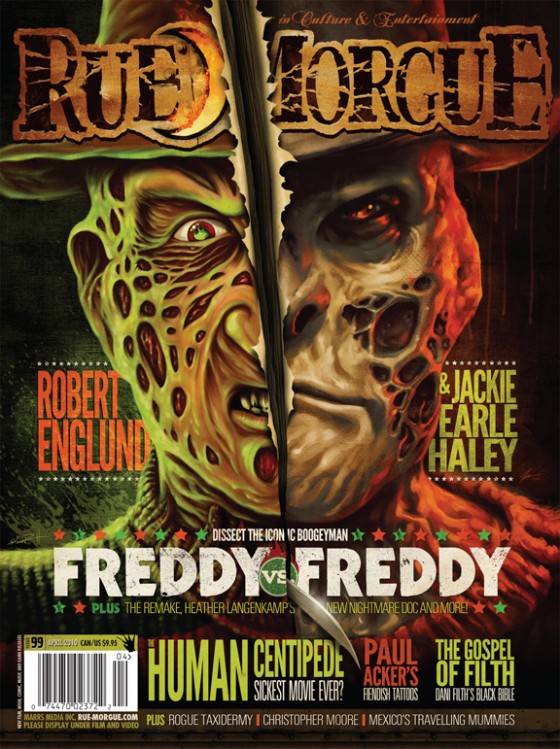 I have to hand it to those make up folks working on the new Freddy face, that is some nasty looking burn scars. Somehow, it feels more realistic maybe? Like how a human would look were he to suffer miserably in a house fire. Don’t get me wrong, the classic Freddy shredded flesh look is just plain painful, but I feel as though, in the new mask, you can see that the designers used burn victim photos. Not sure if this will help or hinder, only time will tell. Oh, you want more? Fine. Here’s a real comparison of the two title killers: 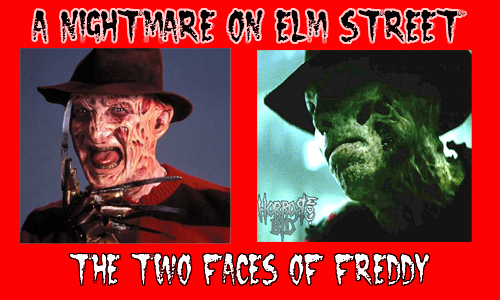 Yeah, that ought to do it. So, this brings us right into the persona… the portrayal of our one Mr. Krueger. From the get go, Englund’s Freddy was a snarky, razor-tongued asshole who immediately tapped into your deepest fears and anxieties and exploited them with wit and an almost masochistic glee. But, as the sequels progressed, he quickly became a cartoon of himself and fell into using contrived and ridiculous traps and an even more class-clown-like tongue spouting one-liners and ultimately hamming it up. But it was still Freddy, and it was Freddy becoming who we know and love today. But what of Haley’s turn? It’s being said that much of the sarcastic humor is being retained, as is the sadistic ways in which he dispatches his victims. In fact, here’s the newest trailer where some of that Classic Freddy comes to light.

How about some merch? Over the years there has been a ton of Freddy Krueger toys, games, and even music made and a lot of it, unsurprisingly, has been pretty lame. First off, we have the classic Nightmare video game for the Nintendo Entertainment System: 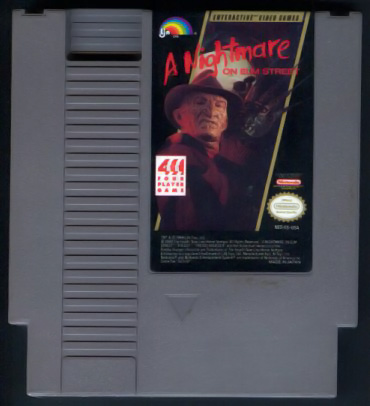 Talk about a 'Nightmare'! Get it... the game sucked.

Now if you’ve ever been in a Spencer Gifts at any point in your life, you’ve no doubt seen this next absolutely amazing piece of Nightmare kitsch. It’s the talking Freddy Krueger doll! 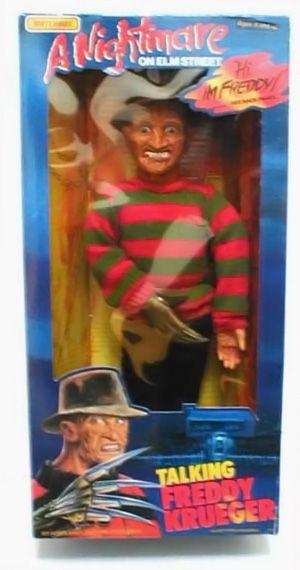 This is just sad. Hilarious beyond words, but so, so sad. 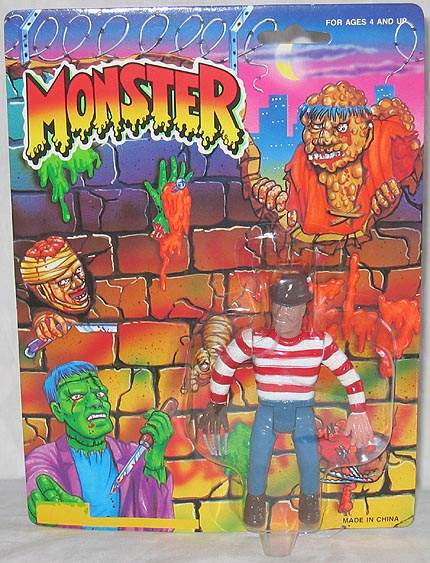 Even beyond the shameless Freddy rip-off, who are those other 'monsters' on this package?

Why not gather the kids and play a rousing game of Nightmare on Elm Street… the Board Game! Oh happy day! Nothing screams quality family togetherness than a games based on the failed escapes of the soon-to-be slashed to ribbons teen victims of Freddy Krueger! Don’t worry, children, you’ll sleep just fine! 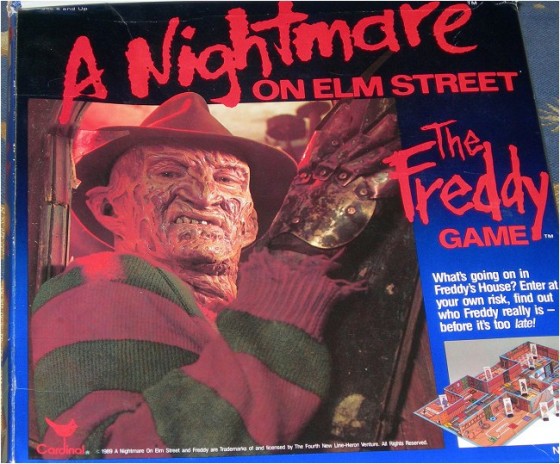 Fun for everyone 6 to 60! I can't wait! (Oh, and thanks to xEntertainment for the pic!)

How about a fine selection from the Cinema of Fear diorama sets? These amazingly sculpted set pieces are pretty damn freaky and do a wonderful job of capturing that moment from the films that got under your skin the worst. 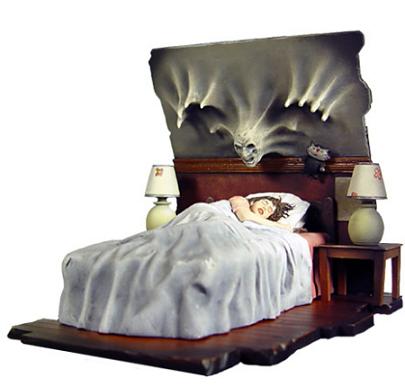 Since our anti-hero had, for the bulk of his filmed tenure, become an animated toon version of himself in many ways, why not go get ya one of these Hot Toys maquettes? They’re cute and horrible all at the same time! Kinda like Freddy himself… 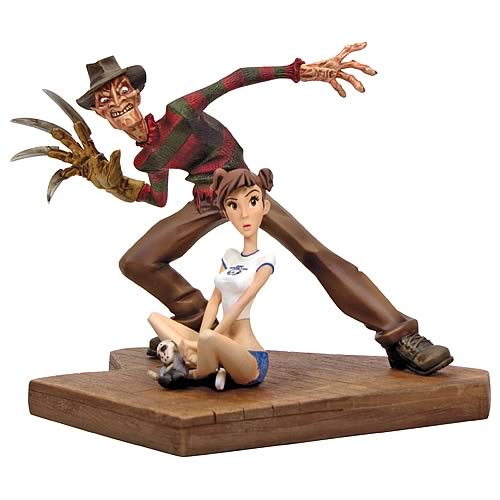 I can almost here a theme song playing behind him.

Well, there are virtually hundreds of other marketed Nightmare things from CD’s to bed sheets, but we know what you really want. Oh yes, you really want an authentic Freddy razor glove! Who wouldn’t? Sure, it’s sharp and likely registered as a deadly weapon in 48 states, but so what, when has that ever stopped anyone before? 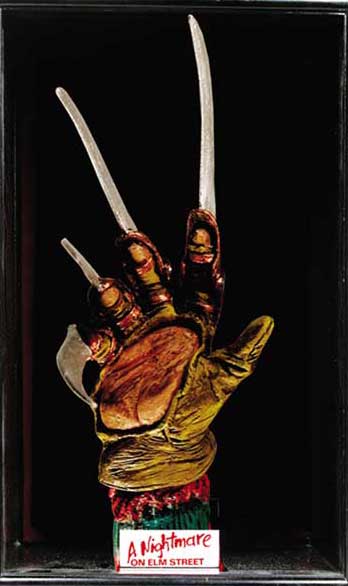 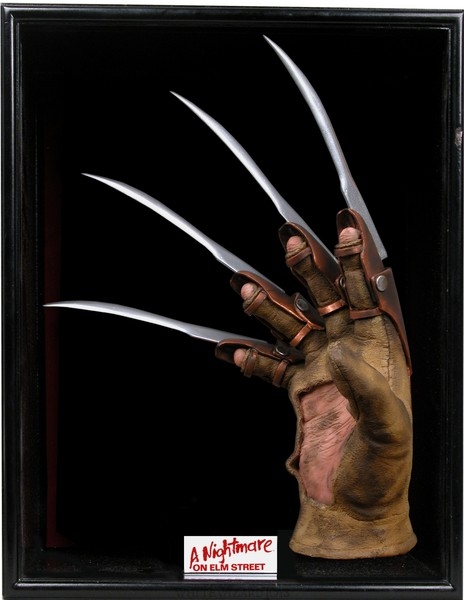 Well, there ya go. Our little tribute to many things that make Freddy who he is. Will Jackie Earl Haley do his iconic image justice? Time will tell, but I have to say if his looks and decent acting chops are any indication, I think so. I normally wouldn’t lay so much hype on a remake, but I’m such a Freddy fan that I honestly can’t wait to see how this looks, especially with a nice R rating. So, I’ll leave you dreaming of some classic Freddy moments.