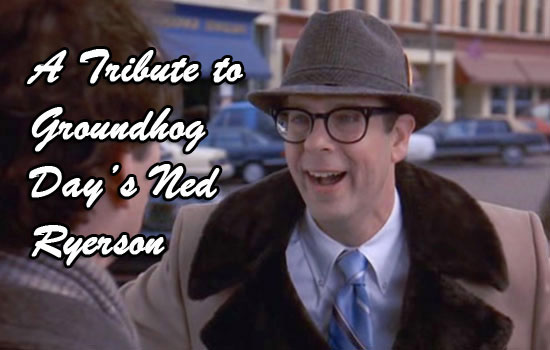 Bill Murray’s 1993 flick Groundhog Day is a comedy classic, and it should be mandatory that we watch it every Feb. 2. We will laugh, no matter how many times we see it, even if it’s more times than Phil Connors spent in this loop-de-loop of a day. If you don’t already own it, you should buy the 15th anniversary edition on Blu-ray.

Aside from Phil, the funniest character in the movie is insurance salesman Ned “Needle Nose” Ryerson. Bing! Played by actor Stephen Tobolowsky, he does virtually the same scene five times (and once more that is a bit different), but each one is unique and leaves us craving more. The Masters of None folks did a “Groundhog Day – The Lost Radio Tapes” podcast with Tobolowsky that you should check out.

Ned has a MySpace page and a Facebook page.

Ned: Phil? Hey, Phil? Phil! Phil Connors? Phil Connors, I thought that was you!
Phil: Hi, how you doing? Thanks for watching.
[Starts to walk away]
Ned: Hey, hey! Now, don’t you tell me you don’t remember me because I sure as heckfire remember you.
Phil: Not a chance.
Ned: Ned… Ryerson. “Needlenose Ned”? “Ned the Head”? C’mon, buddy. Case Western High. I did the whistling belly-button trick at the high school talent show? Bing! Got the shingles real bad senior year, almost didn’t graduate? Bing, again. I dated your sister Mary Pat a couple times until you told me not to anymore? Well?
Phil: Ned Ryerson?
Ned: Bing!
Phil: Bing.
……