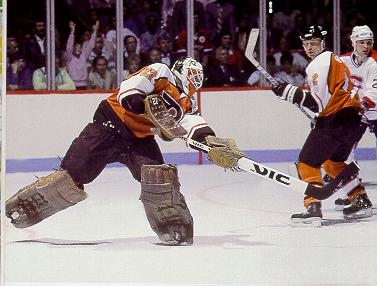 Playing goal in hockey might be the most difficult position in all of sports. Usually, being a goaltender means keeping the puck out of your own net… but occasionally we get to see the rare feat of a goaltender burying the puck in their opponents’ goal. Chris Holt of the AHL’s Binghamton Senators reminded us once again on Friday night that you should never completely discount the scoring prowess of a guy whose primary job is to keep pucks out of the net.

Holt is by no means a pioneer in the goalies scoring goals department. Yesterday we took a look at goalies failing to play their role so let’s have a look at the forefathers of masked men adding to the scoresheet.

The original, Billy Smith awarded a goal on defensive gaffe:

The Godfather of goalie goals, Ron Hextall with his first:

Rugged Ronnie was making a habit of this:

Chris Osgood with the proverbial harpoon on the Whalers:

Brodeur with his trademark puck-handling skills:

Remember when Jose Theodore was spectacular?

Now this is how you ‘Finnish’ a game:

Ok, now this is getting a bit ridiculous;

This is why they call the AHL the minor league: