Media > Television > A Tribute to Lenny and Squiggy

A Tribute to Lenny and Squiggy 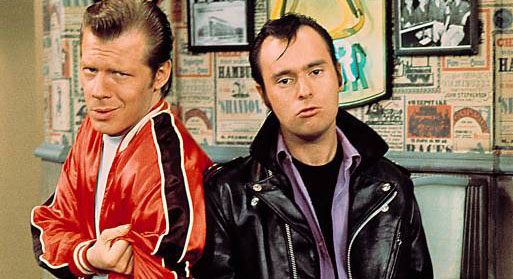 What sitcom sidekick duo is funnier than Lenny and Squiggy? Huh? Huh? No, not Lenny and Carl. So now that we’ve established that Laverne and Shirley’s neighbors are the funniest sitcom sidekick duo ever, let’s take an in-depth look at these comedic geniuses, as defined by the most accurate source of all information ever, Wikipedia:

…a lovable goof who pesters Laverne and Shirley along with his best friend and roommate Squiggy (who both live upstairs from Laverne and Shirley’s basement apartment). Lenny works as a truck driver at the Shotz brewery. Raised by his father after his mother abandoned them, Lenny claims to be 89th in line to the Polish Throne. When Lenny attempted to have the words “Lone Wolf” embroidered on the back of his red jacket, a mistake left him with “One Wolf” instead; Laverne was kind enough to sew on one of her own fancy-script “L’s” to complete the phrase. Lenny says that, while he’s not completely sure, he thinks his last name (Kosnowski) is Polish for “Help, there’s a hog in my kitchen”.

The most obnoxious of the bunch, and the greasiest. Squiggy works and lives with childhood friend Lenny. Squiggy grew up with neglectful parents, and is often scheming to get rich or succeed by somewhat devious means. For some reason, he collects moths, and prizes a stuffed Iguana named Jeffrey. Squiggy, like Lenny, loves the chocolate-flavored drink Bosco Chocolate Syrup, and makes nearly every entrance with his trademark “Hello” said in a slightly dopey voice. In the final season, we learn Squiggy has a lookalike sister named Squendoline.

And let’s not forget that Lenny and Squiggy had a band. They were called…

The group’s eponymous debut album, Lenny & Squiggy sing Lenny and the Squigtones, was released on the Casablanca label in 1979. I found one copy on Amazon. Get Lenny and Squiggy Present… before it sells! If it does, listen to side one here.

Okay, now onto the real actors, Michael McKean and David Lander. McKean became well-known for playing David St. Hubbins in the mockumentary This is Spinal Tap. He was also a Saturday Night Live cast member and has appeared on Broadway.

Lander was the announcer in Penny Marshall’s excellent film A League of Their Own. Also, Lander wrote a book, called Fall Down Laughing: How Squiggy Caught Multiple Sclerosis and Didn’t Tell Nobody

Here’s Lander, out of character:

Quite honestly though, these guys are boring when they’re not being Lenny and Squiggy. So let’s end this tribute with a fan video:

No Time To Die : Review