Sports > Fighting > A Tribute to Mankind

A Tribute to Mankind 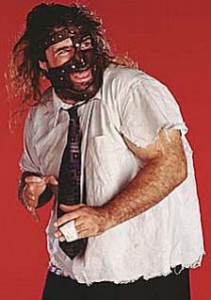 I must admit that I stopped watching wrestling some time in the early 90s, after the golden age in the 1980s. However, there was one guy in particular that made WWE well worth watching. This guy went far and beyond what any other wrestler as done in terms of purposely sacrificing himself for the entertainment of the crowd. Yes, wrestling is fake, but the wounds this guy endured, the teeth that he lost, the blood that he spilled, the falls that he took, were indeed real. That guy is Mick Foley, aka Mankind. Here are clips from one of the most brutal matches I’ve ever seen, his Hell in a Cell cage match with the Undertaker in 1998. Mankind lost this match, but what he went through is unparalleled. Some of it was planned, other parts weren’t. See if you can guess which is which.

Like reliving old Wrestling memories? Then you would be very interested in entering our contest to win a copy of WWE Legends of Wresltemania video game.