A Tribute to Owen Hart

Today marks the ten year anniversary of professional wrestler Owen Hart’s deadly fall during his entrance from the rafters of the Kemper Arena in Kansas City, Mo. at the WWF’s Over the Edge pay-per-view event. Acting as the Blue Blazer character, Hart was using a harness and rappel line in an Intercontinental Championship match against The Godfather. Something went wrong with the stunt harness, and he fell 78 feet into the ring, landing chest-first on the top rope. TV audiences did not see the incident or its aftermath. The cause of death was later revealed to be internal bleeding from blunt chest trauma. Let’s take a moment to honor Owen Hart and reflect on some of his moments in the ring. 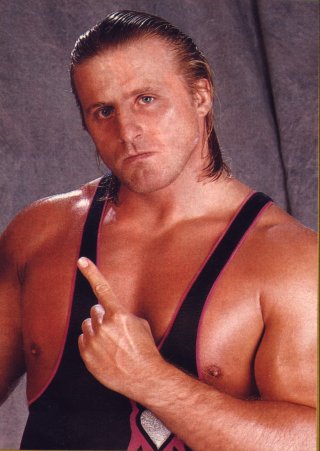 More information:
Broken Harts: The Life and Death of Owen Hart
Hitman: My Real Life in the Cartoon World of Wrestling
Under the Mat : Inside Wrestling’s Greatest Family
Owen Hart Collectibles