Gadgets > Toys > The Bounty Hunters of Empire Strikes Back

The Bounty Hunters of Empire Strikes Back 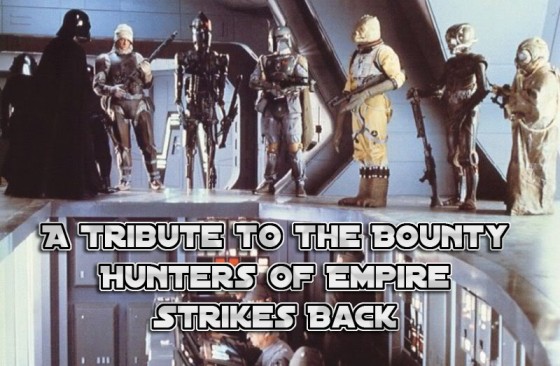 Aside from Vader and his sadistic shit-headed-ness, aside from Luke and his Light Saber, and aside from the amazement of witnessing the ridiculous firepower of the Death Star, there is, without a shadow of a doubt, no denying that the coolest moment (however short) of the original Star Wars trilogy occurred while Vader himself was addressing a group of Galactic Bounty Hunters on their new mission. Just in case you some how forgot how this played out, the following is an excerpt from the actual scene:

The group standing before Vader is a bizarre array of
galactic fortune hunters: There is Bossk, a slimy, tentacled
monster with two huge, bloodshot eyes in a soft baggy face;
Zuckuss and Dengar, two battle-scarred, mangy human types;
IG-88, a battered, tarnished chrome war droid; and Boba Fett,
a man in a weapon-covered armored space suit.

VADER: …there will be a substantial reward for the one who finds
the Millennium Falcon. You are free to use any methods necessary, but
I want them alive. No disintegrations.

BOBA FETT: As you wish.

Now let’s take a good long look at each and every one of these slimy villains and get to know who they really are. Unfortunately (but still pretty cool) we really only get a little more of Fett in ESB and a quick fight in Jedi where he’s supposedly killed after falling into the Sarlacc pit. Well, that and a dubious back story where he’s a kid and some animated bullshit. Anyway, the point is, we never see any of the other Bounty Hunters again, which is a real shame considering each is pretty damn cool. So, from the left, here we go: 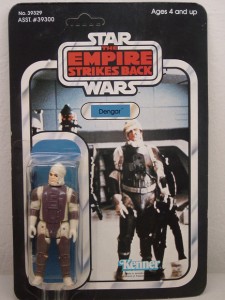 From the Star Wars Wiki: “Dengar (also known as “Payback”) was a Corellian mercenary and Imperial assassin, Grade One active during the Galactic Civil War. The acerbic bounty hunter and pilot of the Punishing One was among an elite group of hunters recruited by Darth Vader to capture Han Solo and the passengers of the Millennium Falcon shortly after the Battle of Hoth. At this time, he was a middle-aged man of heavy build, wearing battered dark brown Stormtrooper armor with a dingy cloth wrapped around his head to conceal the circuitry for his enhanced auditory and visual systems.” 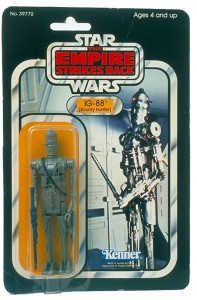 From Star Wars Wiki: “IG-88 was an assassin droid line designed by Holowan Laboratories. The IG-88 line was a derivative of the IG-100 MagnaGuard droids used as bodyguards by General Grievous and the IG Lancer Droids used by Durge during the Clone Wars. IG-88 later became one of the galaxy’s most infamous bounty hunters. However, the bounty hunting was just a cover for the droid’s grand plan—the Droid Revolution.
Moments after activation, the original massacred the scientists and transferred his consciousness into the other three. They then escaped the lab. It is possible it was the droid’s incompletely formed identity that made him obsessed with hunting and killing. They were the successor of the earlier IG-86 droid model.” 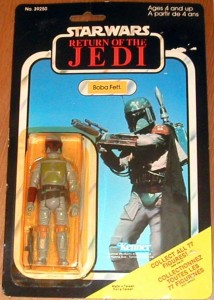 From Star Wars Wiki: “For years to come, Fett’s reputation grew among bounty hunters and assassins. Boba continued to acquire and upgrade pieces of Mandalorian armor. It is said he had at least three complete sets of armor from which to use, one of which was mostly left in the Sarlacc pit. Eventually he found the Mandalorian armor of Jango’s old mentor and leader, Jaster Mereel. Along with his new green and red armor, he had honed his skills as an assassin and mercenary, which would one day make him the most feared and sinister bounty hunter in the Galaxy.” 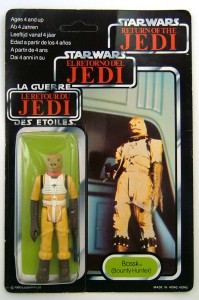 From the Star Wars Wiki: “Bossk (meaning “Devours His Prey” in Dosh) was a Trandoshan bounty hunter and the pilot of the Hound’s Tooth. He also held the title of Monarch of the Qotile system. He was particularly unfond of Chewbacca and his Human partner Han Solo. He would face them several times, and would be one of the six bounty hunters Darth Vader hired to track down and capture the Millennium Falcon. Despite the fact that Bossk loved to hunt and skin Wookiees, he would unknowingly aid in the freeing of hundreds of Wookiee slaves on the island world of Lomabu III. He was also a frequent partner and foe of both Boba Fett and Zuckuss, both fellow bounty hunters. After being repeatedly beaten by Boba Fett, he would eventually boost his reputation as a bounty hunter by defeating Fett on Tatooine.”

4-LOM
Not Your Typical Protocol Droid 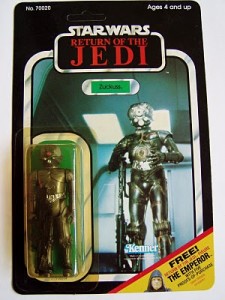 From Star Wars Wiki: “4-LOM was an ambitious protocol droid who overwrote his own programming to embark on a life of crime. A LOM-series droid, 4-LOM’s first assignment was aboard a luxury liner named the Kuari Princess, where he served as a translator between the vessel’s wealthy passengers and its computer. He found this work mundane and undemanding, and after the Kuari Princess’s computer altered his programming, 4-LOM began to steal from his passengers. Eventually, he left the Kuari Princess for good, becoming an expert thief, information broker, and, after Jabba Desilijic Tiure altered his programming further, a highly successful bounty hunter.”

Editor’s Note: Oddly the original Kenner action figures had the names of 4-LOM ad his partner, Zuckuss inverted and never repaired the error until the figures later re-release in 1995-96. This is why the pics I have posted have incorrect names.

Zuckuss
The Uncanny One 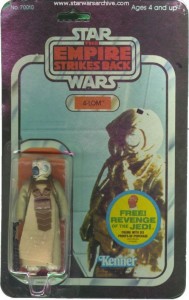 From the Star Wars Wiki: “Zuckuss was a successful Gand bounty hunter during the height of the New Order. Referred to as “The Uncanny One” by his fellow hunters, Zuckuss was renowned for his ability to discover hidden quarry. His tracking skills derived both from his training as a findsman and from his innate Force-sensitivity, allowing him to sense individuals at range and sense the motives of his prey.”

Now, as you can see, I used the original run of the character’s action figures for the images, because nothing scream nostalgia like toys from my childhood. Damn I wish I still had these… but I digress. Now lets check out some of the other ways you can purchase and collect the Bounty Hunters! 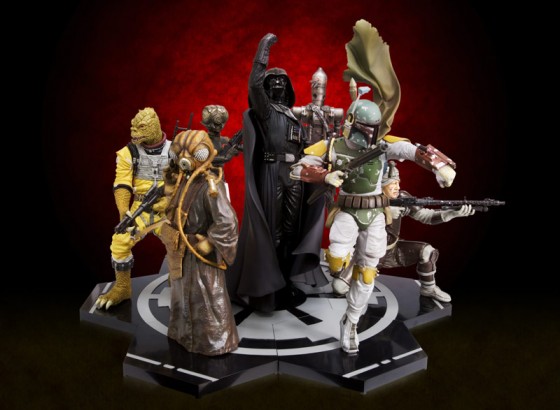 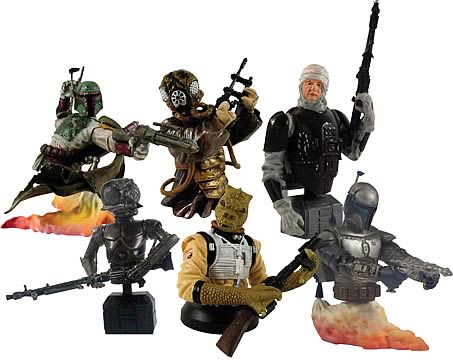 How about some Bobble Heads! 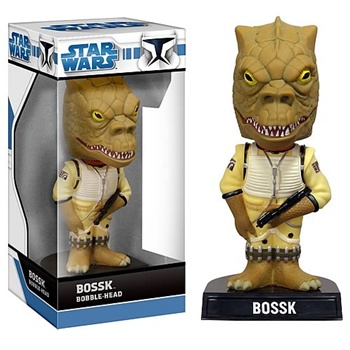 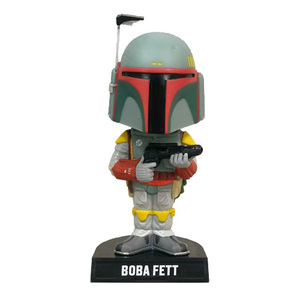 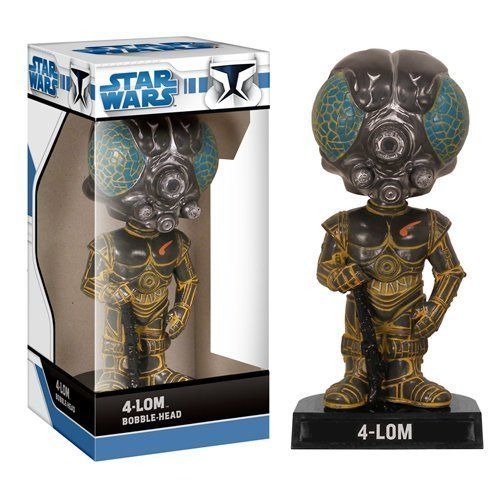 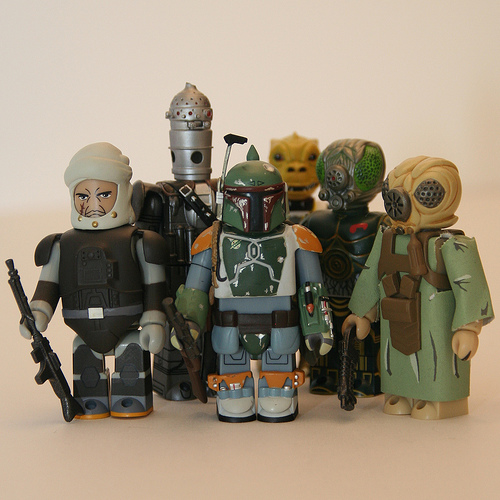 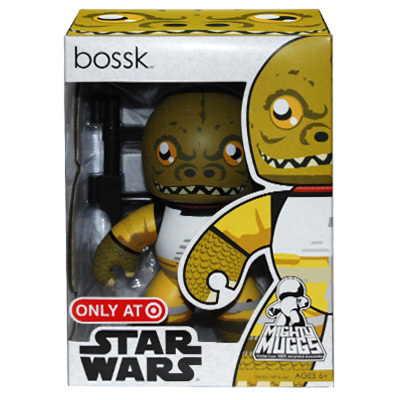 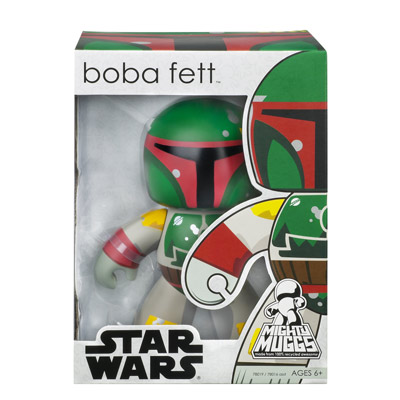 And, of course, LEGO! 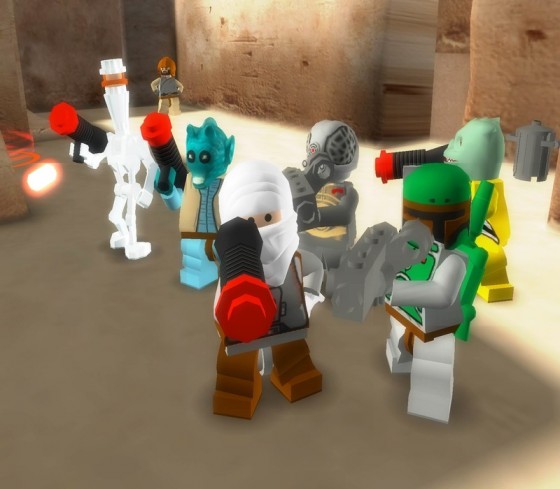 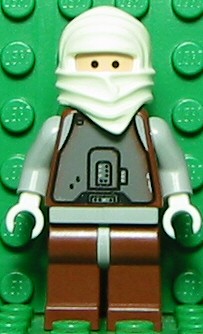 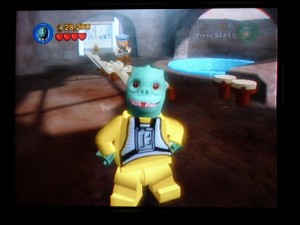 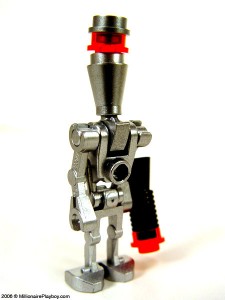 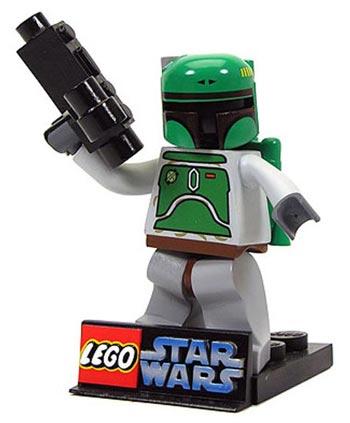 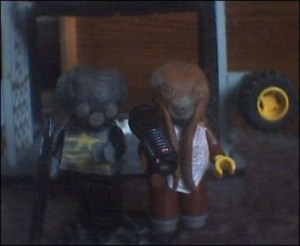