Media > Movies > A Tribute to The Kurgan from Highlander

A Tribute to The Kurgan from Highlander 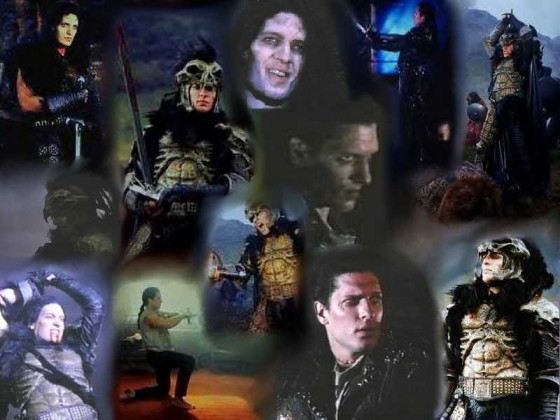 We weren’t sure if the “from Highlander” part of the title was necessary, but then it occurred to us that this film is over twenty years old and, considering its content (immortal men sword-fighting for the ultimate prize), there might be a large segment of the population that isn’t familiar with it (read: ALL women). Revered as a classic “guys” movie, there were probably more women at last week’s Rush concert than those that have seen this sci-fi/fantasy masterpiece worldwide since its  triumphant debut in 1986.

Despite the complete lack of interest from the fairer sex, Highlander went on to achieve cult film status on home video, spawning four (unwatchable) sequels and three (!) TV series. So how does a movie about sword-fighting immortals constantly yelling “There can be only ONE!” reach such lofty status? Was it Sean Connery’s turn as the charming rogue Ramirez? The pulsating and versatile soundtrack by Queen? The laughably wooden performance by Christopher Lambert as protagonist Connor McLeod? The answer is none of the above. And while Highlander was certainly the sum of all it’s laudable parts, it would surely have fallen flat without its most “prized” (get it?) feature, the performance of Clancy Brown as the the über-evil villain, the Kurgan. 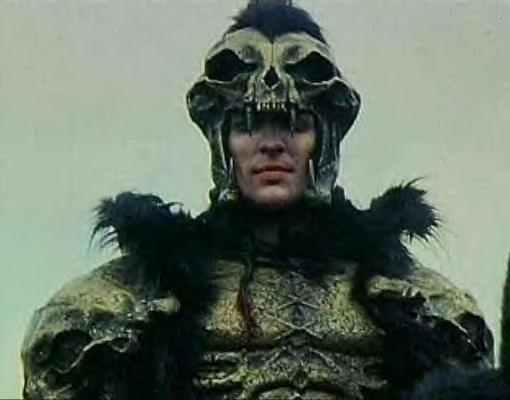 According to Ramirez in the film, the Kurgans were an ancient people from what would later become Russia. They were infamous for their cruelty, and were known to “toss children into pits full of starved dogs, and watch them fight [for the] meat” for amusement (doesn’t that still happen at GOP conventions?). In the novelization of the film (really?), Kurgan finds out he’s immortal when he comes back to life after his father caves in his head in a drunken rage. Rather than act out by peeing the bed or getting a goofy-looking piercing, the little scamp forced his old man to swallow a searing hot stone, killing him! Freud would love that one.

Fast forward several centuries, and countless beheadings, to 1536 Scotland where we first see the Kurgan (YouTube won’t allow any embeds, so I have to link all the good stuff. The first minute or so is awesome, all lightningy menace and Brian May guitar licks, but the ill-advised Rammstein accompaniment afterward starts to grate). After failing to finish off McLeod the first time, our  villain returns later to decapitate Bond and have his way with McLeod’s lady friend. What a dick! It wasn’t enough to kill him once already, but he has to come back and rape his girlfriend AND kill his drinking buddy? (who, incidentally, sounded pretty Scottish for a Spaniard. Don’t you hate those types that adopt the accent when visiting a foreign country?).

Pretty solid villainy so far, but it’s not until we see Kurgan in present day 1986 that he really comes into his own. Adopting a goth-punk look and a penchant for flippant one-liners, he is a pale, gravel-voiced menace. And while he may seem to have mellowed somewhat, paying for sex rather than simply taking it, I prefer to think that he has merely refined his style. Take for example the scene where he confronts McLeod in church: He’s gone and cut his hair off to try to look like the police sketch of himself released to the newspapers! When McLeod feebly attempts to get a dig in against him, K-dawg replies, “I am in disguise” (also the safety pins adorning the giant scar on his throat add a certain je ne c’est quoi don’t you think?). Pure genius! 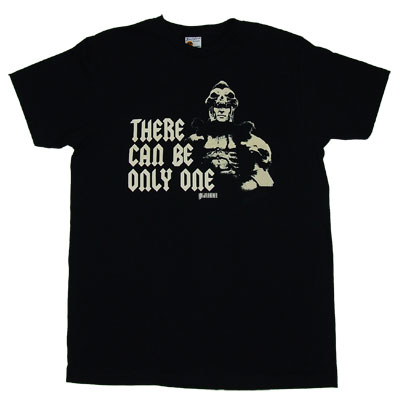 Down about a dozen vodka/red bulls and wear this to the next UFC event at the bar. Guaranteed fun!

Now, I won’t get into the ending for those of you who haven’t seen it, but if you’re like me, you should have some tissues at the ready (interpret that as you will, perverts). Things may not go your way, depending on who you’re cheering for. Either way, in light of speculation about an upcoming remake/reboot of Highlander, I think it’s safe to say that in the case of Clancy Brown’s darkly comic portrayal of the Kurgan, there truly can be only one.