Gadgets > Other > A Tribute to the Rube Goldberg Machine

A Tribute to the Rube Goldberg Machine 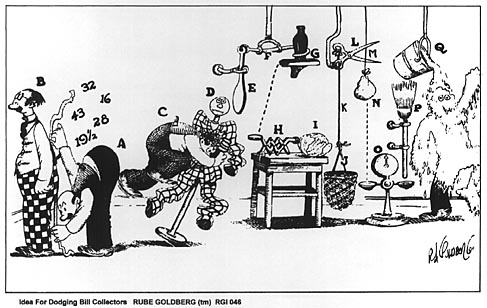 Everyone knows what a Rube Goldberg machine is, right? Well, in its basic sense it’s a largely unnecessarily drawn out series of machines and whatnot wherein the end has the occurrence of the ‘ends not justifying the means’. Or, if you will; far too much for far too little a result. Here’s the Wiki definition for those really interested:

“Reuben Garret Lucius Goldberg (July 4, 1883 – December 7, 1970) was an American cartoonist, sculptor, author, engineer and inventor who received a 1948 Pulitzer Prize for his political cartooning. The Reuben Award of the National Cartoonists Society is named in his honor. He is best known for his series of popular cartoons depicting Rube Goldberg machines, complex devices that perform simple tasks in indirect, convoluted ways. Various international competitions, known as Rube Goldberg contests, challenge students to make a complex machine perform a simple task.”

See? Pretty much what I said. Anyway, throughout the years, many people -students, random inventors, drunk guys- have put forth their own hands into the realm of the Rube Goldberg Machine. In fact, the very popular board game, Mouse Trap, is a great example. So here we have ten really cool examples of what people can do with a whole bunch of time on their hands.

10. Here we have a few guys who were bored one night in their office. They used a bunch of supplies from their goodies closet and this is the cool machine they came up with. Good use of clipboards.

9. Here we have an entire machine that travels the length of, presumably, the owner’s home. My favorite part is the cool use of a vibrating cell phone. Sweet.

8. This shows the winner of the 2009 Rube Goldberg contest. I had no idea there even was one of those. At any rate, the University of Illinois beat the reigning champs, and there machine is pretty darn neat.

7. The next two are animated. This one in particular is based on a few very popular Nintendo games. Though the physics are a bit raw, it’s still really cool.

6. This is an in-game creation from Garry’s Mod. This is so worth the watch.

5. This one is called a ‘Toilet Machine’. I don’t know if I quite get why. Either way, it is an awesome contraption to say the least.

4. You know how it takes like twelve seconds to make a bowl of Oodles of Noodles? Yeah, well, these guys make it take a whole lot longer. Also it is in Japanese, but that makes no difference. Trust me.

3. This one is kinda silly. It does work, but it’s a little amature compared to the others. Hey, it does have a cool Star Wars theme though, so it’s got that going for it!

2. This one is great. First off, it’s from the pretty funny film, Waiting. Second, it’s all about pouring a beer.

1. And here we have a classic. This is the amazing and real Honda Commercial. Awesome.

Here are some of Rube’s famous comics. As you can see, even his illustrations are patently ridiculous. Cool, but ridiculous. 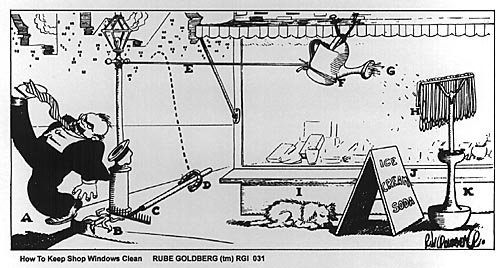 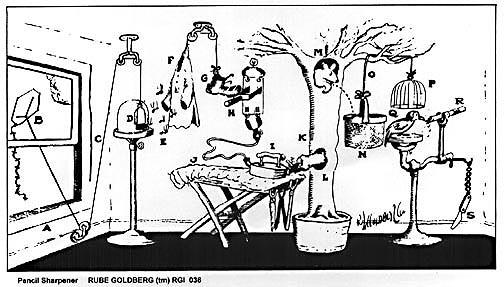 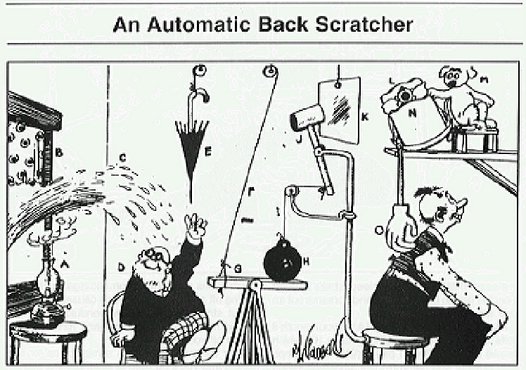 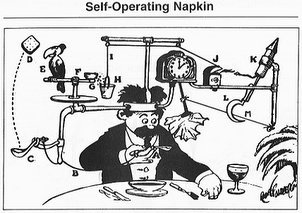