Sports > Hockey > A Trip to the Heritage Classic

A Trip to the Heritage Classic 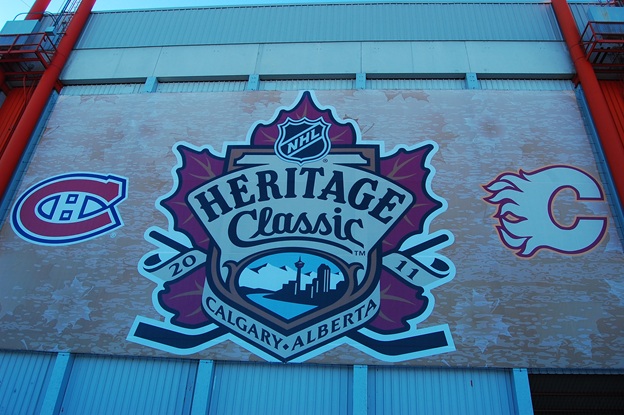 As both Gunaxin’s Token Canadian and a long-time Flames fan, I was happy to offer to write an article about the Heritage Classic in exchange for an all-expenses paid, front-row seat trip to the game.

Unfortunately, my perfectly reasonable proposal was shot down because of “budget concerns,” so I had to pay my own way to a seat in the top corner of the stadium instead. This put me in prime “freezing to death” territory, but despite the cold weather I survived to tell the Internet all about my experience. 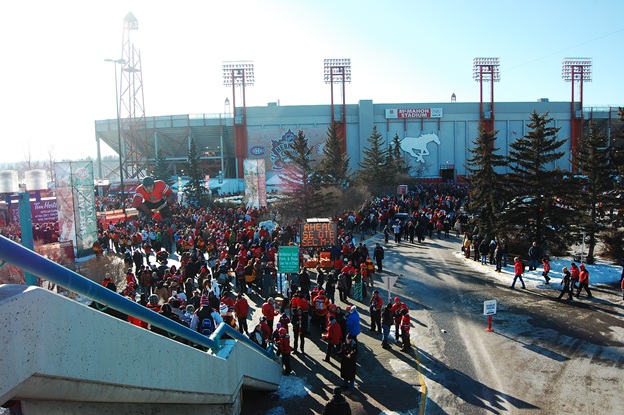 Fans stream into the stadium before the game.

The majority of fans were wearing Flames paraphernalia, but Canadiens supporters were out in full force as well. Outside the stadium the atmosphere was festive, with lots of good-natured joking between the two sides as everyone waited to get through the gates. 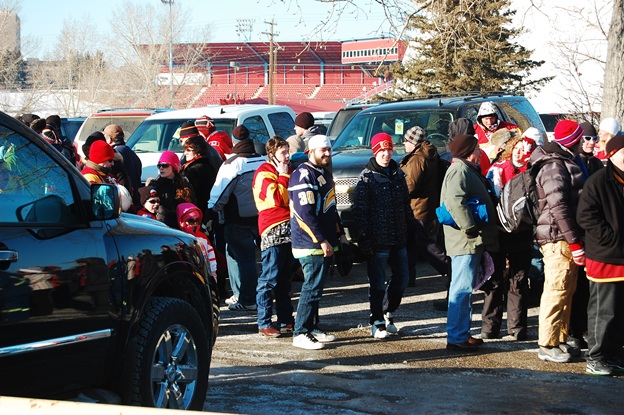 Fans of both teams put aside their differences to heckle the guy who showed up in a Ryan Miller jersey.

Cramming a sell-out crowd of 40,122 into a football stadium that doesn’t usually hold that many people was a slow process, but the wait wasn’t too bad; it was a nice, sunny afternoon. There were also some events happening outside: fans could try their hand at a few games and activities, like an air hockey tournament or a fastest slapshot competition. 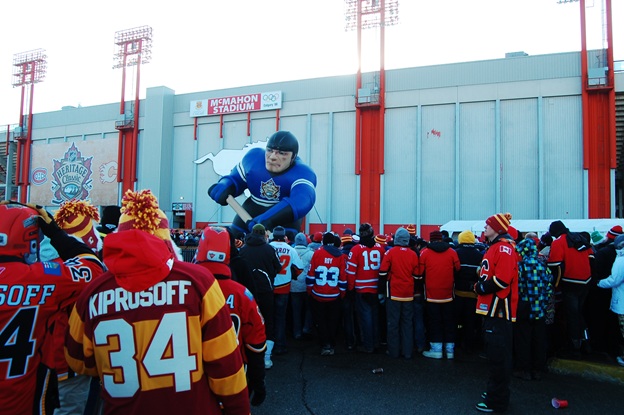 Those waiting to get inside passed the time by marveling at the fabled “big blue inflatable hockey player.”

With fans of both teams wearing the same color jerseys, the stadium was almost completely red. 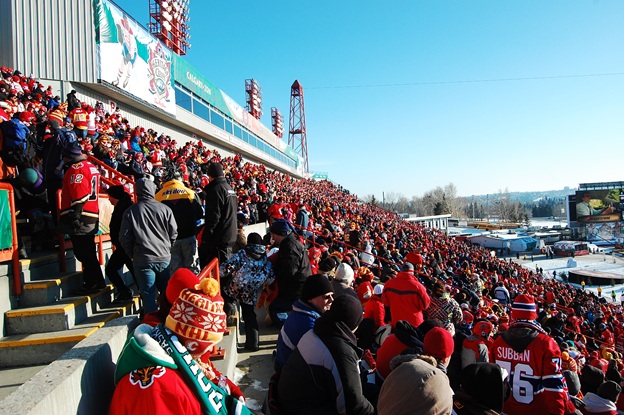 As puck drop neared the place got loud, with Flames and Habs fans starting rival chants. The noise only increased when the Flames got an early five on three power play. 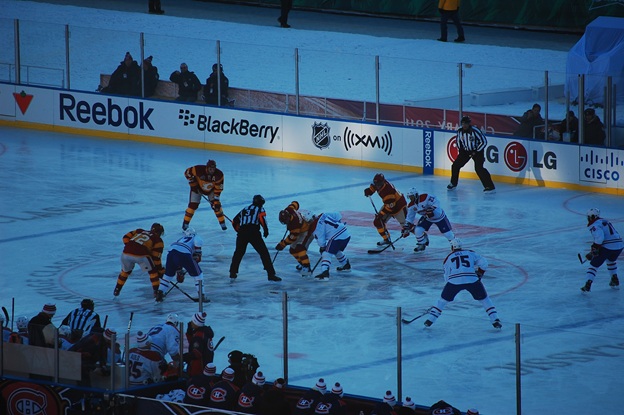 The Flames converted their chance, and the stadium erupted. 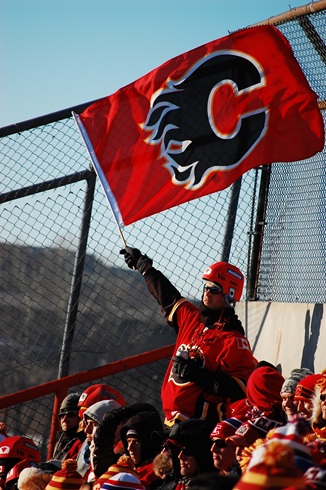 This guy waved his flag like a maniac for the entire game.

The Flames dominated the first period, but Montreal’s fans were undaunted. 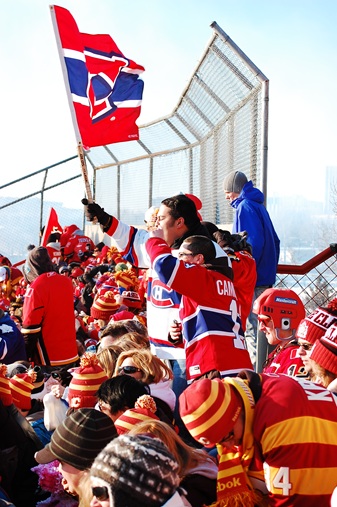 I heard a lot of loud, semi-crazed French coming from that direction.

The Habs pushed back in the second, and had a few good scoring chances. But later in the period Calgary netted a pair of quick goals, and from that point on they were in complete control. 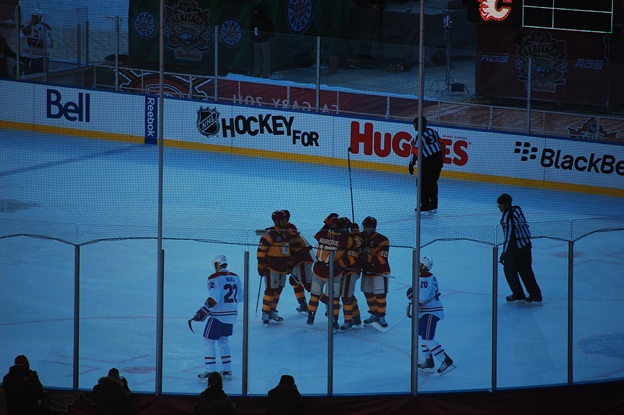 The Flames celebrate a goal.

The sun went down during the second intermission, and the temperature plummeted — it went from “cold” to “dammit, why the hell didn’t I wear more? I’m going to die up here,” in just a few minutes. For those of you who want to get more technical, it was about -25C (-13F) thanks to the wind-chill. Although I think I was the only person feeling the effects of the cold, as people all around me continued to knock back cold beer and various other, non-event sanctioned liquor. 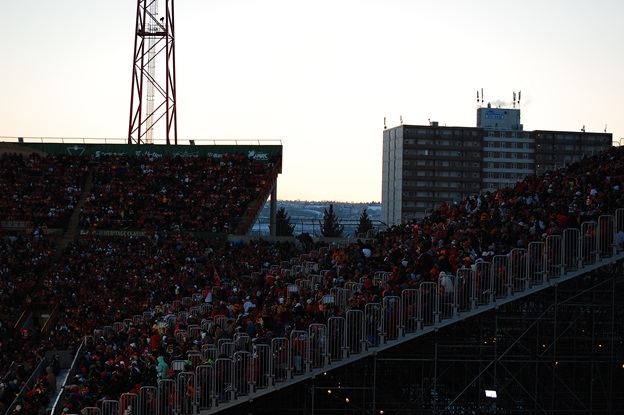 The sun went away, and so did the feeling in my lower body.

The stadium had quieted a little during the second period, but it was raucous in the third. I don’t know if Flames fans were excited by their three to nothing lead or if they just wanted to move around because they were freezing, but either way the crowd got the wave going. And when Calgary scored their fourth goal, a very sarcastic “olé olé olé” chant started up.

The postgame celebration didn’t last long, as everyone was in a hurry to get someplace warm. But the atmosphere was just as festive going out as it was coming in, as everyone had clearly had a good time despite the temperature. Neutral viewers were probably hoping for a closer game, but as a Flames fan I was thrilled with the result. And despite the lopsided score there was plenty of action, with the teams combining for 76 shots. And if that’s not enough excitement for you, I counted a full three hits!

The entire experience was amazing, aside from the fact that I nearly lost my feet to frostbite. While I’ve enjoyed watching the Winter Classic games on TV, being at an outdoor game in person is something completely different, and I hope the NHL continue to hold both events. Before the Heritage Classic there were some concerns that having two outdoor games in a single season would dilute the concept, but I think we can now safely say they continue to be remarkable spectacles.

For more pictures, check out the gallery below: