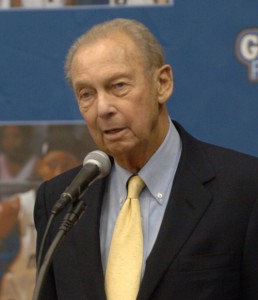 Longtime Washington Capitals and Washington Wizards owner Abe Pollin died Tuesday at the age of 85, a great loss to the DC community.

Pollin had a long and storied career, but what Capitals Outsider (Gunaxin’s brother site) chooses to focus on is the fact that he is one of very few people who had – and took – the opportunity to expose and dismiss NBA legend Michael Jordan.

Jordan came to the Wizards in 1999, first as president of basketball operations, then as a player, but the team didn’t make the playoffs even once. In 2003, Pollin fired Jordan, saying that he had detrimental effects on the team, such as benching Larry Hughes, making poor trades and squandering the 2001 first round draft pick on Kwame Brown (sure, Wes Unseld made mistakes, too, but Pollin stayed loyal to him). Anyway, Pollin basically said “Fuck You” to Jordan and got away with it.

During his NBA Hall of Fame speech, Michael Jordan was a bitter man, talking about people who didn’t believe in him or challenged him, and how he proved them wrong or beat them. But not once did he mention Pollin or the Wizards, which means that’s one itch that Jordan is likely still trying to scratch.

Very few people got away with disrespecting Michael Jordan. And Pollin was one of them.