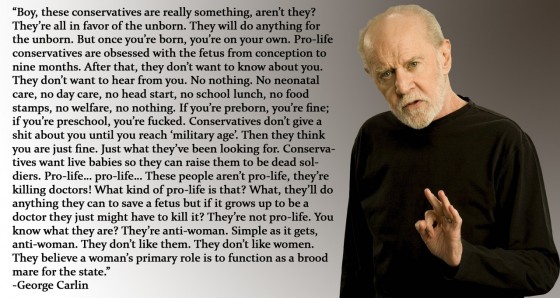 January 22nd marks the 39th anniversary of Roe vs. Wade, the controversial Supreme Court decision that legalized abortion in the United States. So today’s topic will be the subject of abortion used in humor, particularly by stand-up comedians.

Rarely a comfortable subject to discuss, comedians who delve into the topic typically do so in one of two ways. Making fun of anti-abortion folks, particularly the bible-thumping religious fundamentalists, is like shooting fish in a barrel. “Why is it that most of the people who are against abortion are people you wouldn’t want to fuck in the first place?” George Carlin said more than once during a routine.

Contrarily, many comedians, even while siding with abortion rights, humorously bring up what can only be perceived as the irresponsibility of those who rely on the procedure. Occasionally you’ll hear a female comedian make jokes about her own abortion, but typically there is self-deprecation involved.

Like with any subject, the number of laughs from these jokes varies greatly, and they’re not always meant just for one side to enjoy – both sides may get a kick out of them (or not). Chris Rock once said that abortion should be legal at least until the kid brings home his first report card. The absurdity of that statement is the joke itself, which both anti-abortion and abortion rights advocates may find funny. Those who take statements such as these literally just don’t get jokes.

Now, let’s take a look at some videos. Note which are funny, and specifically why.

Margaret Cho (on immigration and abortion)

Incidentally, yes, Cho is on the list of top ten female comedians who aren’t funny.

So there’s a glimpse at how comedians cover this subject, and like anything, the humor can often overshadow the politics. In other words, funny or not, abortion remains just another topic in the arsenal for comedic material.