Sports > Baseball > Adam Greenberg Got His One At Bat

Adam Greenberg Got His One At Bat 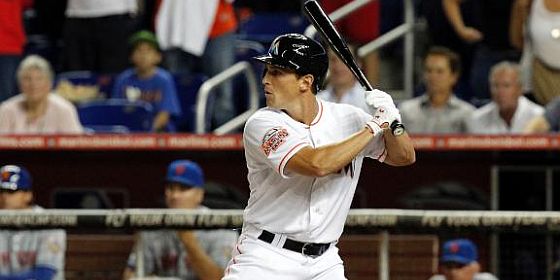 Last week we introduced you to Adam Greenberg, a former Cubs farmhand who was beaned in his only career plate appearance seven years ago. Thanks to a viral video campaign, and a Marlins franchise desperate for some good publicity, Greenberg finally got another shot at big league pitching on Tuesday night.

Unfortunately for Greenberg, his trip to Miami didn’t include a Disney ending, with him crushing a home run 450 feet to deafening applause. Instead, Greenberg did something most major league ballplayers did this year when facing the Mets R.A. Dickey —  he failed to reach base. The Cy Young Award candidate showed little mercy for the comeback player, striking him out on three pitches.

Adam spoke to ESPN after the game, expressing gratitude for the fans and seeming overwhelmed with the whole process.

Matt Liston, the documentary filmmaker who spearheaded the effort to get Greenberg one more shot at the majors posted his own video after the at bat, sharing the experience from the perspective of Adam’s mom.