Looking to all the world like an emo Syndrome of The Incredibles, sweet and unassuming Adam Lambert did his best to set back the gay rights movement Sunday night. His controversial performance featured such memorable  instances as grinding a dancer’s face against his crotch, driving a leashed man onstage, making out with his dude keyboardist and clumsily somersaulting onto a scaffold while trying to not sound winded. Sounds hot? It wasn’t. It was a poor attempt to be edgy and sexy while showing less grace than an out of shape and slightly drunk Britney Spears at the VMAs.

We get what you’re trying to do here, Adam. You’re a vocally talented gay guy of small stature, your album was just released and you’re staring at 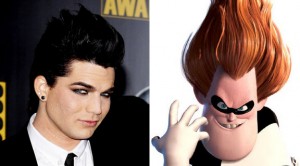 what may be the rest of your career typecast as the nice boy next door no man would be ashamed to bring home to meet his PFLAG president mother. And that’s because it’s what you are, Lambert. Sorry buddy, but there are chicks who make more butch gay guys than you. Your manager may have had you sit down in front of videos of legendary badass gay guys like Rock Hudson and Freddie Mercury with a post-it note reading “ACT LIKE YOU HAVE A PAIR”, maybe you watched a little Ziggy Stardust for some make-up tips, but what you guys are missing is a sense of gravitas you won’t possess while wearing ridiculous studded leather bracelets. Essentially, you could have beaten Freddie Mercury with a pillowcase filled with doorknobs and it would have only made him stronger. That ain’t something you have, Adam.

What floors us is the claim of controversy. 1500 people complained to ABC! That’s like .01% of the AMA audience!  Call us cynical jerks who  write about more successful and attractive people than we can ever hope to be, but something tells us ABC was itching for a live event along the lines of Janet Jackson. But there’s always next year, Lambert. Have that dancer tear off a velcroed cod piece with his teeth, then you’ll be playing with the big boys.