Sports > Football > Admit What You Did

Admit What You Did 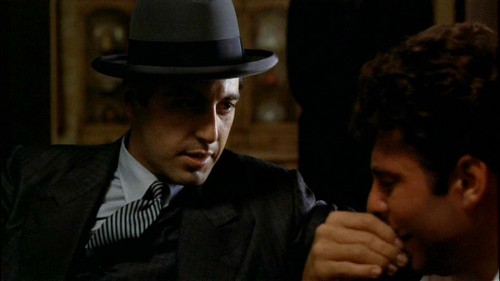 I leave for New York tomorrow, think about a price.

“Barzini is dead. So is Phillip Tattallgia. Moe Green. Slacci. Cuneo. Today I settled all family business so don’t tell me that you’re innocent. Admit what you did.”
– Michael Corleone

The time spent between the NFL Draft and start of the regular season is a rare span of the calendar when money turns grey. Rookies are added to rosters but their services aren’t officially owned until teams negotiate contracts and sign checks, eventual realities that often take months to materialize. Free agents without deals can float without certified employment for weeks until a team commits to their offerings (as of submission there are 37 free agents without deals signed for 2010). Players with contracts deemed insulting engage in contentious holdouts, refusing to render their services until their employers show them the respect they feel is deserved.

Some are starting to wonder if the New York Jets haven’t learn a thing or two from Michael Corleone.

Coming off a tremendously successful campaign, touting a regular-season record of 9-7 culminated in a playoff run that died just short of the game’s grandest stage (falling 17-30 to the Indianapolis Colts in the Conference Championship), the Jets left last season with a passion bucket overflowed with positive emotion and expectation. They had fallen just short of the game’s ultimate goal despite a roster bloated with inexperience and youth led by a brash coach in the midst of his first season at the helm of this or any other NFL team. Rex Ryan wasted no time emulating his father Buddy (the famed mastermind of the defense for the 1985 Chicago Bears), throwing his trophy belly and all of the bragadocious taunts he could pull out of it around for any and all that would listen… and those kids in Jersey backed him up.

Led a freshman at quarterback (Mark Sanchez), an elite defensive backfielder taking the league by storm in only his second year of play (Darrelle Revis), and a boatload of underage phenoms all around ‘em (center Nick Mangold, tackle D’Brickashaw Ferguson, rusher Shonn Greene, tight end Dustin Keller, linebacker David Harris) the Jets vaulted through the season many fans have yearned for years.

Sitting in the doldrums of June the only positive notes we find on the Jets relate to Sanchez, his progress towards health (having undergone knee surgery… really a negative headline being spun positive, huh?), and the poon he’s pulled since moving to New York. 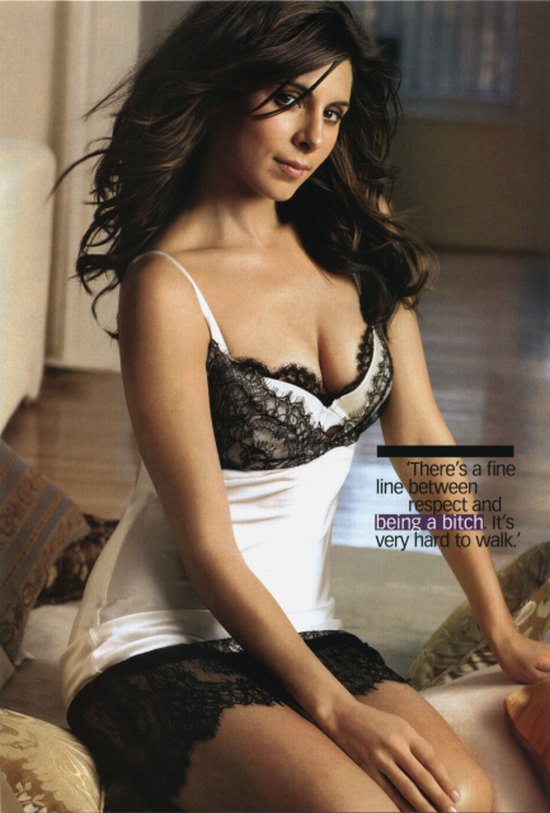 Meadow, The Mafia Hottie of Choice for Sanchez

Since leaving the AFC Championship behind the Jets have found criticism aimed at their approach to the checkbook and its relationship to the roster. It seems more than a few of the contributors, especially those who have been cultivated and raised by the franchise, are no longer deemed worthy of respect. Rusher Leon Washington was the first outcast of the offseason, told he was no longer needed and thus signing with Seattle. Veteran guard Alan Faneca was next, cut from the roster following the Jets’ decision to draft Vladimir Ducasse from the University of Massachusetts (long known and respected as factory for football greatness… that would be sarcasm). Defensive end Marques Douglas, defensive tackle Howard Green, rusher Thomas Jones, corners Justin Miller and Lito Sheppard, kicker Jay Feely… all sent packing, and rumors persist that more (quarterback Kellen Clemens, receiver Braylon Edwards) will follow.

To be fair all of these decisions can be justified by typical NFL logic. Leon comes off a broken leg and will spend the rest of his days playing with an iron rod in his femur, a notion that becomes much more difficult to swallow with Greene on the roster. Faneca, Douglas, and T.Jones have grown old and could be deemed as costly and unwise investments.

However, it might be the other decisions that raise suspicion to the level it’s at today. The Jets were quick to hit free agency and the NFL trade market to add fresh faces. Veteran rusher LaDainian Tomlinson was signed for two years at $5.2 million. Some would wonder why you spend money there when Thomas Jones might have been retained at the same price, and Jones has been much more productive over the last two seasons). Defensive end Jason Taylor was added to the mix with a hefty $15 million price tag over two years, there are those who suggest the price paid to retain Douglas would have been a wiser investment. The Jets traded for corner Antonio Cromartie and receiver Santonio Holmes, and while neither has been granted a new deal thus far, both are expecting hefty raises sooner rather than later (that’s how this works… their teams traded them for pennies on the dollar, at least in part, to avoid that situation). 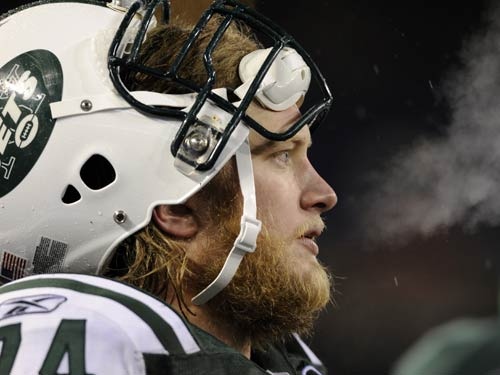 The center of attention.

More concerning is the sizeable list of commodities already due for new deals. Mangold and Ferguson are both approaching the final years of their rookie deals before they hit restricted free agency. Mangold, respected by many as the best young center in the land, has been voicing his desire for a new contract for months and is now rumored to be destined for a prolonged holdout until the Jets get things right (to their credit, they claim this is a “top priority”). Ferguson has played nice thus far but you can bet an elite young protector of NFL quarterbacks, one of the most coveted and highly-paid positions in the league, will be looking for his pay day. Edwards is due for a new deal, David Harris is due for a new deal, give Sanchez one more positive year behind center and his agent will certainly suggest he is due for a new deal.

Worst of all, Revis has decided his current agreement is no longer up to snuff… and he’s right. Simple review of his contract suggests he is working under a deal that guarantees $20 million, a contract that would be more than reasonable considering Revis’ lack of experience. However, closer inspection shows, due to the insane structure of the deal, Revis isn’t going to see the bulk of the money until 2012. According to Mike Florio with ProFootballTalk.com, Revis’ contract was once deemed as a landmark negotiation, giving Revis surprising power by offering him the option to void the final two years of a five-year deal (that three-year span is up after 2010) while giving the Jets power to buy those two years back, offering 2011 at $5 million and 2012 at $15 million.

However, due to the structure of the agreement, Revis will net only $550k in compensation this season. As a result Revis is wise to protect his interests… he wants to void after this season (there is no debate here), but he has to get through this season to get that money. If he suffers horrific injury, the power held in that potential decision to void is moot. He can void and the Jets can simply choose NOT to pay for the final two season. Florio speculates (correctly… this isn’t rocket science) the Jets may WANT Revis to holdout as a result. There are vague qualifiers in the deal that tie all of these contractual terms to “compliance with the duty to attend mandatory team functions. 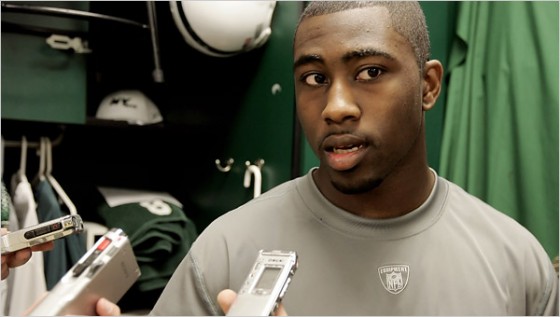 Regardless, when you consider, as Florio notes, Oakland corner Nnamdi Asomugha (considered by most to be the second-best corner in the game) is making more than $15 million a season, the typical inflation associated with the league and talents like Revis, and the undeniable growth in salary-cap troubles the Jets are now building… it seems awfully hard to deny Revis isn’t the one player on the roster most deserving of a new deal.

Yet he sits, like Mangold, D’Brick, Harris, and others… watching the Jets amass a roster loaded with salary-cap obstacles and a list of headlines that suggest none are truly viewed as source of concern.

You can speculate on the motivations guiding the Jets from there. Clearly they wanted to take this sum’ bitch to the next level and, if all of the commodities owned were making nice, it would be difficult to suggest they aren’t among the favorites to do so. With a potential lockout looming that may or may not alleviate NFL owners from paying all of these contracts next season, you could suggest the Jets are simply taking advantage of a unique and advantageous environment. The PFT team offered post suggesting the Jets are doing it all, mixing a model developed by the Washington Redskins with their fortunes found via recent drafts to build their own NFL Mafia for 2010.

I don’t really give a fuck what they are doing… I want to see who plays the role of Luca Brasi, Hyman Roth, and Fredo. Someone will get paid and someone will be sleepin’ with the fishes… and it may be Rex Ryan.