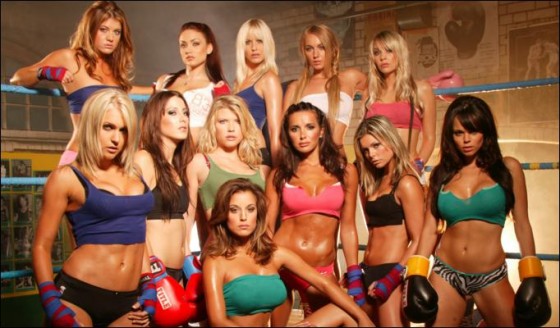 There are technically twelve in this picture, please forgive us.

When hunting for your personal safety needs, you don’t want to be bogged down with boring, humdrum black and metal tasers and clubs. That’s what grandma used to use to beat shadowy figures into a coma in back alleys. Today, you want something stylish. Dare we say, something cute. Cute, yet still horrible enough to make an attacker lose bowel control. 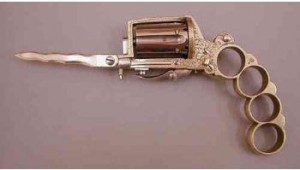 Multi-tasking pain is the way to go when you want to put the hurt on an attacker in a multitude of ways. Pepper spray is blinding and all, but will it perforate a kidney? Break a jaw? Leave an ungodly stink? Not at all, so that’s hardly hilarious.

Surprisingly, our old timey ancestors (being folks from around 1900) were well aware that a multi-purpose tool for maiming for far superior to any single purpose weapon, and making it look sexy was just as important as function. Thus, the Apache, a delicate blend of brass knuckles, bayonet and pistol designed for either a rather slim man or a woman, was capable of wounding another human in a variety of ways while making the wielder look like a latter day Final Fantasy character.

The weapon folded up, ensuring you didn’t need to break a nose while simultaneously stabbing and shooting someone (unless you wanted to), and slipped easily into a fanny pack or whatever people in 1900 used to carry their weapons around in. 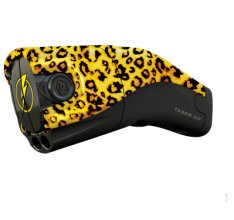 Mixing the fun of animal print with the thrill of muscle seizing electrical shock is the Taser C2. Available in fashion pink, forest camo, desert camo and leopard print, the Taser C2 is sure to impress the person whose urine is being forced from their rapidly spasming bladder at the other end of the Taser’s 50,000 volts being delivered in a 30 second cycle. As a bonus, while you watch them writhe, you can use the Taser MP3 holster to listen to your favorite tunes if your assailant’s grunting and moaning becomes too uninteresting. 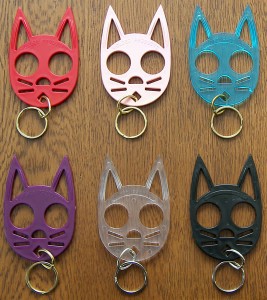 People who teach self-defense have long recommended the use of keys held between your fingers to make your fist into a stabby weapon of face poking terror should the need arise. But really, who wants to fuck up their keys on some asshole’s face? You get a chunk of forehead in there and you’ll be scraping it clean for hours. Luckily someone invented these cute little kitty key chains, whose sole purpose is to have their pointy, hard as hell ears jammed into the soft tissue of someone who’ll be too embarrassed to tell anyone why they have bloody craters in their neck. 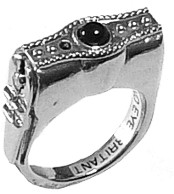 The best self-defense tools are the ones that could never, ever backfire and completely douse you in a noxious substance while you absently rub your eye or pick your nose, and that’s why the Stunning Ring is clearly a winner, because we polled everyone in the office and no one can think of anyway a ring full of pepper spray that is triggered by your thumb pressing a button on the side could go wrong.

It’s hard to tell from the picture, but probably this ring is not the size of a small orange or anything of that nature, so it’s debatable just how much pepper spray fits inside and if you have to actually insert the ring into your attacker’s eye for it to work. But either way, if he stands still long enough for you to get this fashionable piece of mayhem really close to his face and deploy your secret weapon, man is he going to be surprised. 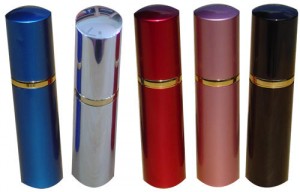 For those who can’t find room on their finger for a ring full of pain spray, there’s these tiny tubes designed to look like lipstick that just might do the trick next time you’re wandering down a dark alley counting out your stack of $100 bills.

Where the pen knife popularized the trend of deadly weapons disguised as every day objects, the lipstick pepper spray takes it to a trendy new level, and best of all it comes in a variety of colors, just in case your attack has a keen fashion sense and is on to all the other ladies pulling out red tubes when red clearly doesn’t go with their outfit.

Women can walk the nights without fear again, provided they live in a town where muggers and assorted other miscreants are known to let their victims freshen their make up before attacking. 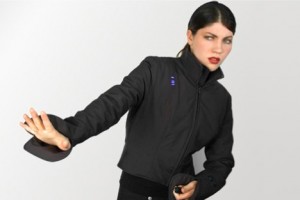 Sometimes self-defense gets in the way of, you know, not doing stuff. Reaching for that telescoping baton or a stun gun can take valuable time away from thinking about your favorite kind of pie or pondering if you have toilet paper left at home. That, with the attack you’re presumably under at the same time, is just too much to have on your plate.

Fortunately, the No Contact Jacket takes at least one of those weights off your shoulders by giving you clothing that pulses with 80,000 volts of “fuck you” directed at anyone foolish enough to touch you while at the same time letting you look like a sexy, albeit standoffish, lady about town. Sure, there’s about a million ways an electrified jacket could turn out to be a horrible idea, but there’s also a million ways it could be the most hilarious thing ever at a rave or during one of those trust exercises where you have to fall back so someone can catch you. 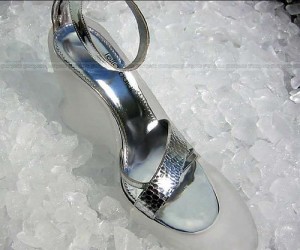 For many moons now, a woman’s last line of defense (or first line) against a male assailant has been a swift, debilitating kick to the marble bag. Few things drop a man as quickly as a boot that hits its mark and squishes your kiwis. The only saving grace men have is years of pretending that any injury in that area is heinously painful when in fact it takes a pretty decent bullseye to drop you. Of course, when that happens, the rest of the world fades away and you go swimming in a black abyss of cursing and bloody urine.

Anyway, while kicking balls is all fine and good for a lady in distress, it’s pretty passé and barely multi-tasks the pain. The Electric Cinderella shoe, however, combines the agony of a ball kick with the heretofore unimagined agony of an electrified ball kick. Plus, in order to activate the stun part, the glass tip of the shoe needs to be smashed, meaning there may be that third level of awful when tiny shards of glass get embedded in scrotum. 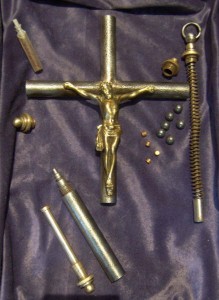 Jesus saves, so you’re in luck if you get shot by the crucifix pistol as he might see clear to miss your internal organs and give you a clot so you don’t bleed out. Unless God’s feeling a little Old Testament, in which case you may be screwed.

Anyway, some devout lover of mayhem decided to create this 9mm weapon in order to help people meet their maker a little sooner than most and as an added bonus it looks thoroughly pious and not at all like a sacrilegious boomstick.

Likely the very coolest aspect is the potential for wicked cool one-liners your victim is going to face as he thinks you’re cowering and praying for mercy, things like “What would Jesus do? Probably shoot you in the neck!” or “Hey look, this thing’s a gun!” 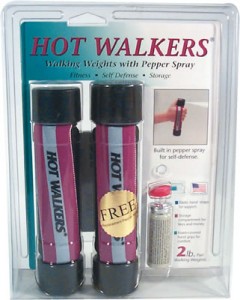 If you’ve ever been to a mall just after dawn, you’ve likely seen that heinous re-enactment of Dawn of the Dead that happens at nearly every mall when the elderly mall walkers begin to shamble about getting their exercise listening to muzak versions of today’s Top 40 awfulness. Amongst those shambolic hordes of crypt keepers getting exercise are generally one or two really ambitious types who will walk with hand weights and if you’ve seen them, you’ll know exactly why they need a self-defense tool as their very presence inspires rage in the most calm and law abiding amongst us.

Lucky for those oldsters (and other assorted ass hats who use hand weights when they walk), Hot Walkers add an extra bit of protection that one pound weights alone don’t provide. The weights also contain pepper spray and hopefully the fragile, wussified hands of those who carry them possess the necessary muscle control to actually deploy the weapon in a pinch. 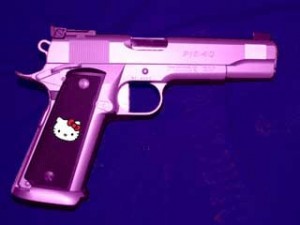 Gun violence is a huge problem and being shot is probably all kinds of awful, up there with having to watch sitcoms on NBC. Still, if you have to have a gun to open beers or shoot the lights out at night, why not make it one that’s memorable instead of boring old black and blood splattered?

A number of retailers have created custom guns with Hello Kitty colors and designs, and apparently law enforcement agents make a habit of buying them for their wives so both of them can bond over a round of shooting targets down at the range.

An added bonus on the defense side of things is the nearly incalculable humiliation factor for any would-be thug who comes face to face with and is subsequently shot by a pink Hello Kitty gun.