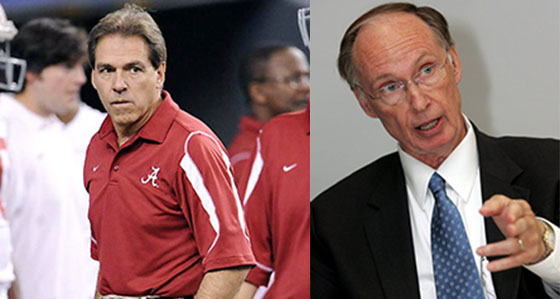 In the state of Alabama there is only one official who outranks the governor, and that’s the head coach for the Crimson Tide. Seeing the opportunity to take Coach Nick Saban down a notch, Alabama Governor Robert Bentley decided to weigh in on Alabama’s stunning defeat to Texas A&M this past weekend. When asked by an interviewer about Saban’s decision to throw the ball three times at the goal line late in the game Bentley responded “I would actually have run the ball for four straight times.”

It’s nice to know that Bentley has the time to weigh in on college football. Running a state that is 49th in obesity, 47th in math and science education, and with one of the highest hate crime incident rates would normally keep most politicians from weighing in on someone else’s decision making skills.