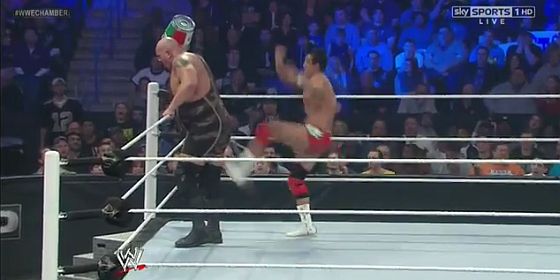 In one of the more bizarre events in Sunday’s WWE Elimination Chamber pay per view event, Alberto Del Rio made a major mistake. On his way to getting The Big Show to tap out, Del Rio was supposed to kick a bucket into the giant’s head while he looked the other way. Unfortunately for both Del Rio and any suspension of disbelief, the first attempt at the bucket kick completely missed.

Not to be discouraged by missing a major move, Del Rio attempted the kick again, this time felling the still oblivious show by bouncing the metal bucket off his dome.

For a more complete recap of last night’s event check out our friends over at The Wrestling Blog.