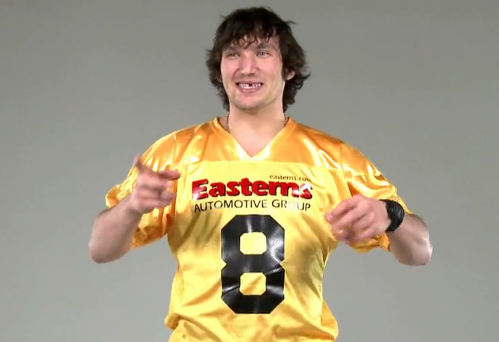 Anyone living in the Washington, D.C. area is sure to be familiar with the now famous Easterns Motors Commercials. For those of you not from this area, they typically feature DC Athletes, singing the Easterns Motors song and hanging out in their fresh new rides. “At Eastern Motors, your jobs your credit”. So basically Easterns is like the Fannie Mae of the car business, giving you more car than you can afford. Ovechkin can obviously afford lots of car(s). Here is some video from his commercial shoot. For more, including Ovechkin making a bet with Chris Cooley during the shooting, head over to Capitals Outsider.

My favorite line is obviously, “can you get me some shots of vodka please”

Here are a few more of the famous Easterns Motors commercials:

… and this one features the Late, Great, Sean Taylor: