Hollywood finally got to Robert Rodriguez. Some might say that’s a good thing; he’s never worked with a budget as large as the one afforded to Alita: Battle Angel. To his credit, he doesn’t waste any of it, making the film bound and rebound with energy and style to spare. Yet… it looks like any other big-budget action film in tone and presentation. As we find him working with the likes of co-writer/producer James Cameron (Aliens, Terminator 2: Judgment Day, Avatar), renowned action cinematographer Bill Pope (The Matrix, Baby Driver), and WETA Digital (the effects house responsible for the Lord of the Rings trilogy), one can’t help but feel like Rodriguez has been tamed a bit. 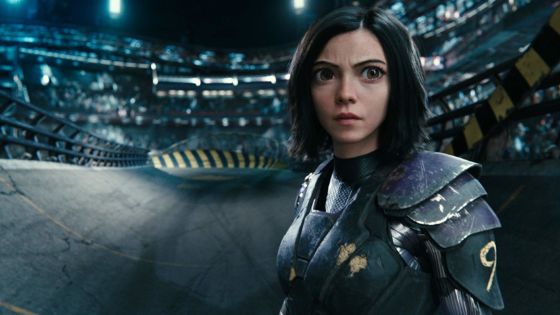 His expressive spirit has been dialed back in favor of an overload of computer-generated whizbangery and quick-cut action sequences which wouldn’t seem out of place in the Marvel Cinematic Universe. However, as the first paragraph said, maybe it’s a good thing. Alita: Battle Angel finds Rodriguez in a place we haven’t seen him in yet, where neither action or visual effects find prominence over the other. Both of these ingredients serve one thing: the story. Cameron and Laeta Kalogridis’ script lays a firm foundation for this science-fiction actioner, with a surprising amount of humanity and heart coming from more than a few unexpected places. 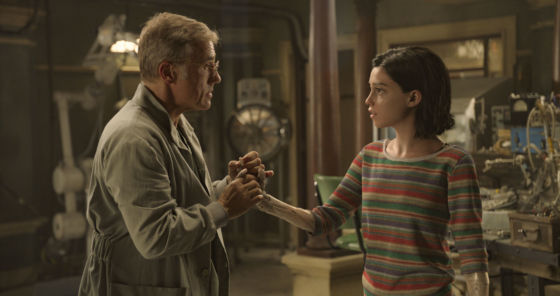 A lot of this emotion springs from Alita, played with a beautiful nuance and spark by Rosa Salazar. Her physical body may have been replaced by motion-captured animation, but her voice and feeling come blazing through the screen, extending a hand and pulling us through Alita’s awakening and literal self-discovery. When we meet her, all that’s left of her is a robotic torso and head with exaggerated eyes defining an origin unknown even to her, as we soon learn her memory circuits have failed. 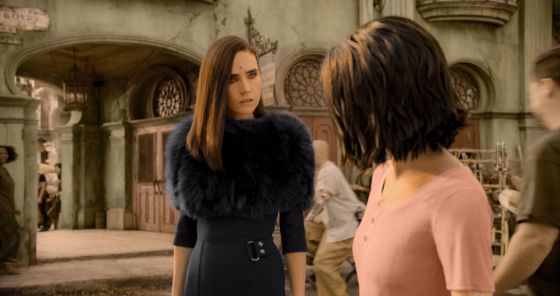 Fewer films have been able to put you so squarely in the shoes of an amnesiac struggling to deal with a strange world suddenly thrust upon them. Christopher Nolan made the granddaddy of all damaged-memory films with Memento, which nothing will ever be able to best; Alita: Battle Angel is a rather fun way to explore this trope through Alita’s computer-widened eyes. It’s a metaphorical characteristic taken straight into the corporeal as she experiences life on Earth after a cataclysmic war known as “The Fall,” in which alien invaders destroyed much of Earth’s population. 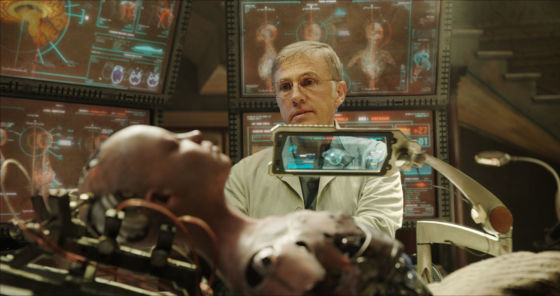 The only remaining civilization we’re exposed to is in a ruined city, where hybrid human-cyborgs make their living any way they can. Dyson Ido (Christoph Waltz), the scavenger who pulls the deactivated Alita out of a trash heap and restores her to consciousness, is a cybernetic doctor by day, moonlighting as a bounty hunter known as a Hunter-Killer in his off-hours. His side work keeps his storefront business up and running, the resources of which he uses to give Alita the body parts she’s missing and her name (all of which come along with a surprisingly touching story sure to affect parents of disabled children). 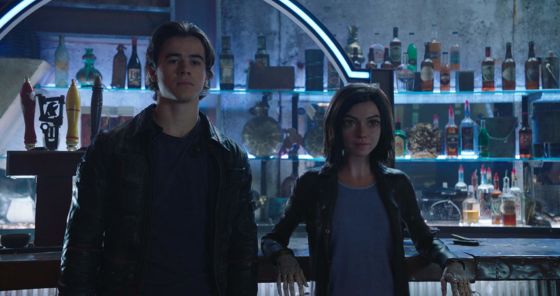 Together, they take on the scum of the city along with Hugo (Keaan Johnson), a boy who’s ignited romance in the impressionable Alita. Like many of the people around them, Hugo dreams of earning enough money to make it Zalem, the floating sky-city known which hovers overhead, at once inspiring and trampling the souls of those beneath. The only way to get there is to participate in a lethal sport called Motorball, in which armored combatants vie for the chance to ascend. (It’s a combination of The Running Man and John McTiernan’s remake of Rollerball.) However, he’s got a side-hustle, too – one which could prove ultimately deadly to Alita. 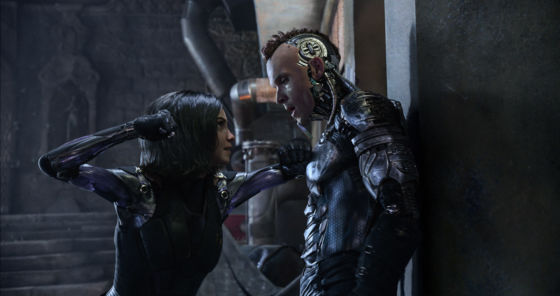 Alita: Battle Angel is packed full of eye candy and action to the point where we almost forget some of its logic flaws, the biggest being that Alita might be a member of the alien race responsible for the destruction of Earth and many of its inhabitants. However, she’s walking around undisguised in this city full of leftovers who live in the remains this war has wrought. You’d think someone might have recognized her features and singled her out – not as the hero she becomes, but one of Earth’s enemies. 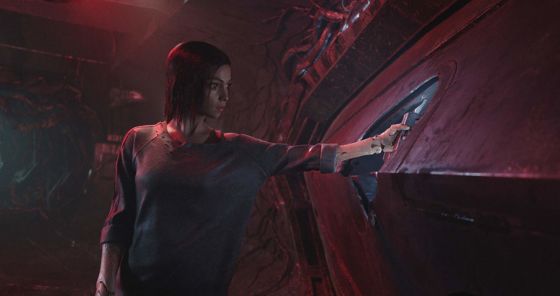 Robert Rodriguez straight-up ignores this quibble and sticks to the humanity of the story through heartfelt performances and characterizations. As Alita, Rosa Salazar almost makes us forget we’re watching a computer-generated figure and wills us to sympathize with her. Amid all the visual effects this film throws at you, she simply becomes the film’s most special effect by creating a character so strong and vulnerable; there’s little you can do but root for her completely. Similarly, Christoph Waltz wears Ido’s years of toil, regret, and wariness almost suffocatingly, giving himself to the excitement and danger Alita has brought to his life. These two are paired wonderfully, bouncing off of each other and lending meaning to their existences. 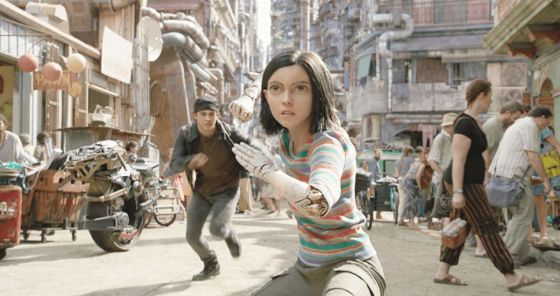 Using a balanced combination between practical and digital effects and sets, Rodriguez sinks us fully into this dilapidated world bereft of optimism. His characters are meant to stay where they belong, with Zalem being a constant reminder of their place underfoot. Ido lives with this defeat, carrying emotional baggage of lost loved ones and suddenly thrust into being a parent-figure to a childlike being who is fast approaching her destiny. He can’t shield her from the ugliness; instead, he channels her talents toward helping conquer it. 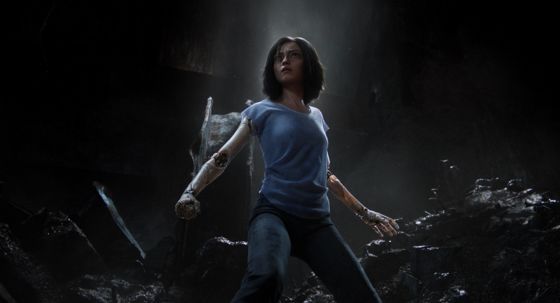 The film concludes on an almost Empire Strikes Back-esque note after suffering devastating losses. We have just witnessed the first chapter of Alita’s story, with entirety of the film devoted to world-building and character establishment. The surprise appearance of a well-known (and uncredited) actor only makes the end much harder to deal with instead of softening the blow. Don’t be surprised if its jarring smash-cut to the end titles leaves you quoting Janet Jackson’s “Miss You Much” where she says, “That’s the end?!” Hopefully, the answer to that will be a firm “no,” as Alita: Battle Angel is a firecracker of what feels like an epic two-part battle with much more exploration and confrontation waiting in the wings.

MPAA Rating: PG-13 for sequences of sci-fi violence and action, and for some language.
Running time: 122 minutes.
Released by 20th Century Fox.

Hollywood has finally tamed Robert Rodriguez with the big-budget Alita: Battle Angel... and it's not such a bad thing.