Media > Movies > All in the Name of Godzilla

All in the Name of Godzilla 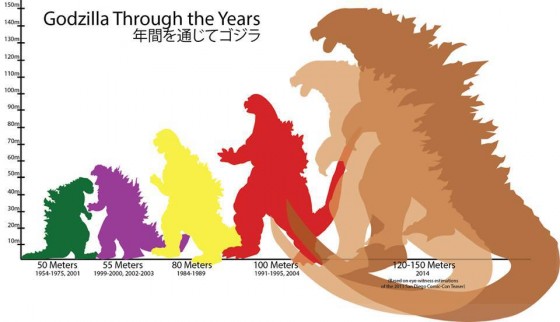 If there is one movie this season (Spring/Summer) that really intrigues and excites me to my very core, it’s definitely GODZILLA. Seriously, in an action-packed blockbuster time when everything including a new, and patently ridiculous looking TMNT movie is being flung at us, it’s GODZILLA that somehow stands out from the pack. But we’ll get to that in a bit. Let’s begin with my life-long fascination with the gigantic, marauding reptile. 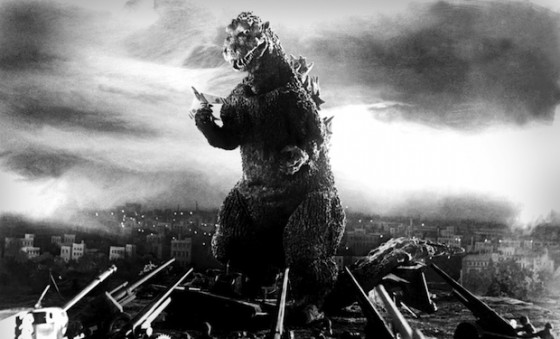 It certainly began when I was a lad, of that there is no doubt. But oddly enough, it didn’t really begin with those old Toho flicks that permeated the Saturday afternoon airwaves all over WKBD out of Detroit. This was our original would-be FOX station that always showed great shows like Specter-Man, Ultra Man, and myriad giant monster films during nearly every weekend afternoon. Some even over the lunch hour weekly where my dad and I -while he came home for his lunch break- would take in the awesomeness. Anyway, GODZILLA was a standard, but the real reason I fell for him can be summed up in one word: MEGO. 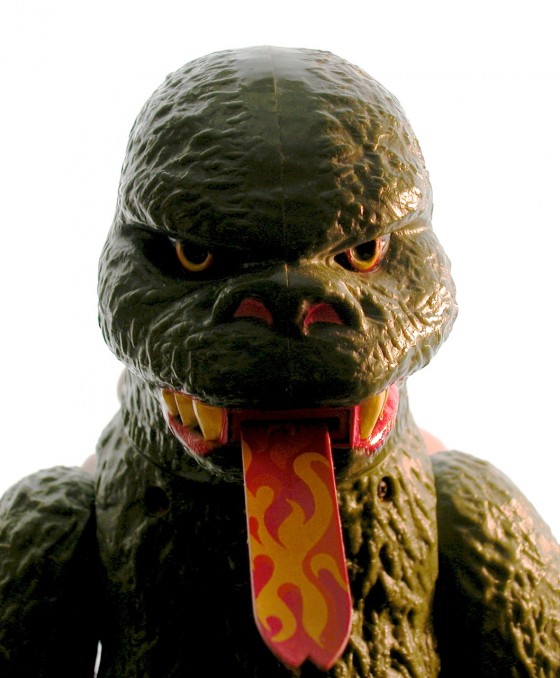 You see, my neighbor, a cat four years my senior, was big into all the cool toys… ones I either wasn’t allowed to have or just didn’t. He had everything you could imagine a boy could have, including the giant MEGO Godzilla. This thing wasn’t much for articulation (as was the norm back in the early 80’s) but it made no difference to a kid who didn’t know any better. This toy was my favorite and I’d pick it to be my go-to no matter what other toys we were assembling outside. Star Wars day, was it? Too bad: GODZILLA is gonna wreck the hell out of your Rebel Alliance, bitches! Shogun Warriors come out to play? Crap on that noise: GODZILLA is gonna jack up your dojo! You get the idea.

Eventually, though, it was the movies themselves that began taking hold, and with the advent of the home video market, I was in GODZILLA heaven. Sure, reruns on the aforementioned WKBD were still running, but now that I could rent videos of really poorly translated Japanese imports… well, that was the business right there. I could care less about their crummy, indecipherable plots and stories, it was the big monsters I cared about. And yes, even as a youth I knew which were really shitty and which were slightly above par. For my money, the best five GODZILLA films are as follows (oh, and this list doesn’t include the best thus far, the original itself):

One has to keep in mind that this was the third in the franchise and though it did feature KING KONG, it was Toho’s version of the giant ape (since he was owned by Universal) and he does look just a bit different. Aside from that, it’s a fun movie and makes Kong the second of a long line of monsters that the big lizard would fight in all future installments. 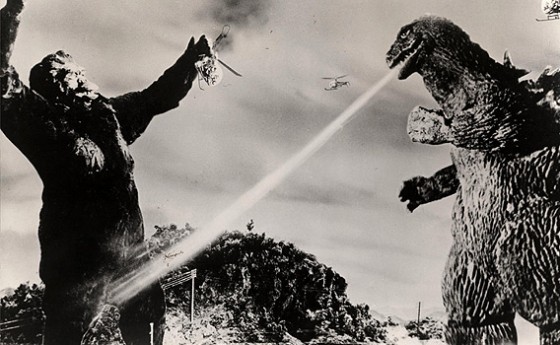 Yep, it’s the fourth film following on the foot-heels of the previous entry. This was the time when Godzilla was truly in his heyday, and just before the movies really began taking a turn into ridiculous territory. Well, more ridiculous anyway. Here we see the first monster, Mothra, in the series brought in from another Toho franchise entirely. Remember, Kong wasn’t technically theirs. This movie is largely considered one of the very best. 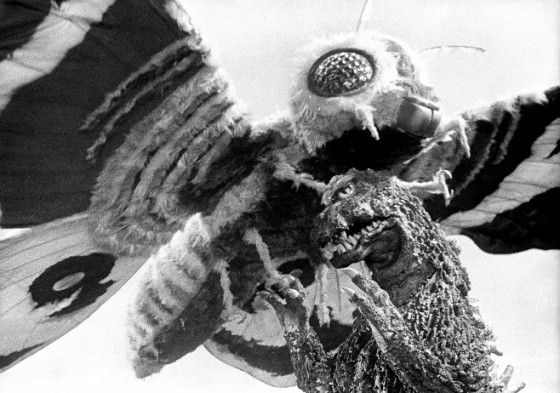 Hey look! It’s the fifth in the franchise! It also happens to be one of my favorites and definitely one of the best. In this move we find Godzilla’s alliance turn from a mindless city destroyer to one of a more heroic role. The citizens have come to depend on him to rise from the water (or where ever he left to in the previous adventure) and kick some serious raging monster ass. This one features Ghidora, the golden, three-headed dragon-type monster. Very good fight scenes, too.

This movie was intended to be the last of the Godzilla franchise and was subsequently given a far bigger budget not to mention a whole slew of monsters to pit against both the titular character and each other. It features Minilla (Godzilla’s son), Anguirus, Rodan, Mothra, Gorosaurus, Kumonga, Manda, Baraga, Varan, and the main antagonist, King Ghidora. Yeah, some of this is a mess and even more is a bit light on excitement, but the end battle is absolutely worth the wait. A great movie. 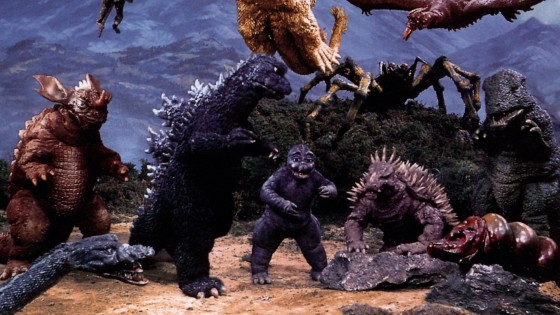 Previous to the new release this Friday, this was the most recent and arguably one of the best (goofiest?) entries in the series. Arriving in 2004, and just before the big Toho Titan was to receive a star on the Hollywood Walk of Fame (seriously), Final Wars premiered to slightly mixed reviews. But all that aside, this is just a balls-to-the wall scrap fest featuring a menagerie of the best Kaiju monsters from the stories franchise including the utter destruction of the monster this film dubs Zilla (the T-Rex rip off from the Matthew Broderick abomination) which was a hysterical jab to be sure. Anyway, a damn good movie with a crazy mess of fights. 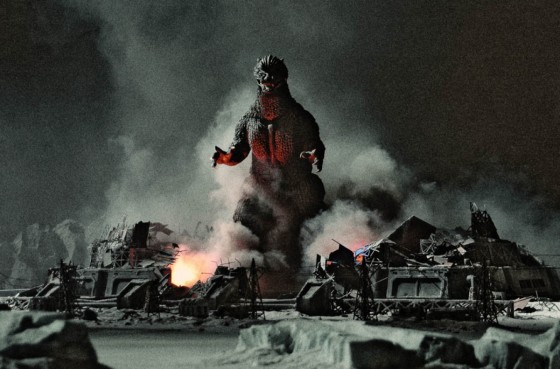 So now we come to the new GODZILLA which arrives in theaters tomorrow. A movie that I am almost jumping out of my seat to see. Ever since Devlin/Emmerich shat on the legend with their gag-inducing slice of crap a few years ago, I have been longing for something made state-side that could really rinse the taste of it from my memory. As have a ton of other folks. So the company, with full backing by Toho, handed the reigns to the more than capable hands of Gareth Edwards, who directed the independent film, Monsters.

The story already looks solid, and you know the acting is going to be above par with Breaking Bad alum, Bryan Cranston in the lead roll. And yes, in case you couldn’t guess from the trailers and TV spots, there will be another creature, or creatures, that Godzilla will likely have to dispatch. Actually, before we even caught glimpses of the limb of these things in the ads, I saw the toy pack on shelves and the only other monster besides Godzilla available for purchase is whatever the thing is he fights. He looks a bit like a cross between the Cloverfield monster and something out of Starship Troopers. Which stands to reason since the influence of those creatures were, in turn, influenced by Godzilla himself. It’s the circle of Kaiju life, kids. 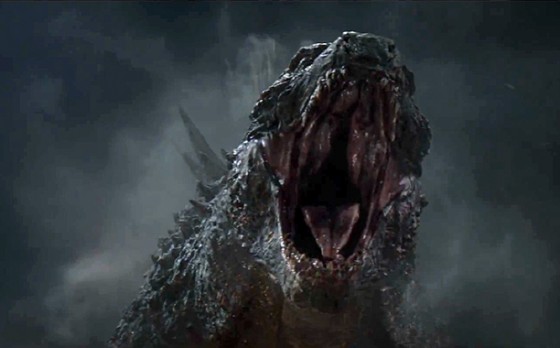 Anyway, that’s a little look into my personal experience with Godzilla, and I sure wouldn’t be upset if the new movie fell somewhere within the Cloverfield/Pacific Rim movies in terms of coolness and effectiveness. It really has a chance to be amazing, because if it isn’t, this might be the last we see of the big monster. I have to go play with my MEGO now.