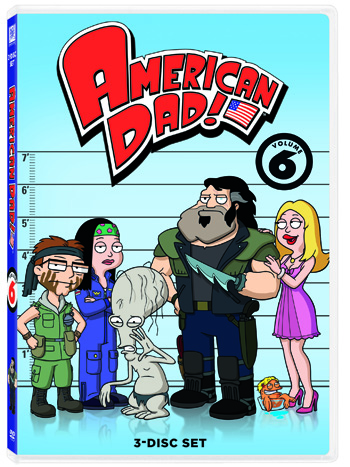 The ever loving trigger-happy CIA operative Stan Smith is back in the three disc set of American Dad: Volume Six — taken from season 5 of the series. Smith still has the same attitude of stopping at nothing to defend everything that makes this country great!  Whether he’s trading brains with a racehorse or rescuing Roger from bloodthirsty revolutionaries, Stan will do whatever it takes to secure the blessings of liberty for the greatest nation on Earth.

Of course, Smith has been harboring the most illegal alien of all time, Roger, in his home with his not-so-smart wife Francine, his liberal hippie daughter Hayley, geeky yet cocky son Steve and a talking goldfish named Klaus. Some of my favorite episodes in this season were “Rapture’s Delight,” “Don’t Look a Smith Horse in the Mouth,” “Brains, Brains, and Automobiles” and “Merlot Down Dirty Shame.”

American Dad Volume Six includes all eighteen hilarious episodes of Season 5, uncensored and loaded with extras including deleted scenes and audio commentary. Volume 6 is available on DVD April 19th for the advertised retail price of $35.99. You can purchase the set on Blu-ray or DVD at the Fox Store or you can win a copy by following us on Twitter!